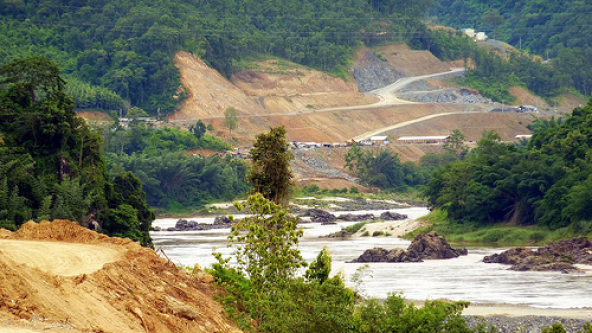 In clear defiance of its neighbors and a regional agreement, the Lao government has announced that it will hold a groundbreaking ceremony at the Xayaburi Dam site on the Mekong River this Wednesday, November 7th. Mr. Viraphonh Viravong, Laos' Deputy Minister of Energy and Mining, told a group of journalists yesterday, "It has been assessed, it has been discussed the last two years. We have addressed most of the concerns."  After the ceremony, the project developers are expected to begin construction on the coffer dam, which diverts the river while the permanent dam wall is built. The coffer dam is expected to be completed by May 2013.

"The international community should not let the Lao government get away with such a blatant violation of international law," said Ms. Ame Trandem, Southeast Asia Program Director for International Rivers. "We are calling on donor governments and the governments of Thailand, Vietnam and Cambodia to take a firm stand against Laos. The Xayaburi Dam is the first of a cascade of devastating mainstream dams that will severely undermine the region's development efforts. The food security and jobs of millions of people in the region are now on the line."

Construction activities at the dam site began in late 2010. In April 2011, the Cambodian and Vietnamese governments asked the Lao government for further studies on the project's transboundary impacts. In December 2011, the four governments of the Mekong River Commission met and agreed to conduct further studies on the impacts of the Xayaburi Dam and 10 other proposed mainstream dams. To date, no regional agreement has been made to build the Xayaburi Dam despite the 1995 Mekong Agreement's requirement that the governments of Cambodia, Vietnam, Thailand and Laos cooperate and seek joint agreement on mainstream projects.

"Laos said it would cooperate with neighboring countries, but this was never genuine," continued Trandem. "Instead, the project always continued on schedule and was never actually delayed.  None of Vietnam and Cambodia's environmental and social concerns have been taken seriously.  Laos has never even collected basic information about the ways that people depend on the river, so how can it say that there will be no impacts?"

On October 22nd, Vietnam's Minister of Natural Resources and Environment met the Lao Prime Minister and requested that all construction on the Xayaburi Dam be stopped until necessary studies to assess the impacts of Mekong mainstream dams were first carried out. Laos continues to deny that the dam will have transboundary impacts and is applying the recommended mitigation measures made by Finnish consulting company Pöyry and French company Compagnie Nationale du Rhône, despite the fact that the project has never carried out a transboundary impact assessment. The Cambodian government, Vietnamese government, and scientists throughout the Mekong region have disagreed with the work of these companies.

"Laos is playing roulette with the Mekong River, offering unproven solutions and opening up the Mekong as a testing ground for new technologies.  When the Mekong River Commission stays quiet and tolerates one country risking the sustainability of the Mekong River and all future transboundary cooperation, something is seriously wrong," said Ms Pianporn Deetes, Thailand Campaign Coordinator for International Rivers. "As Thai companies serve as the project's developers, financers and the Thai government will purchase the bulk of the Xayaburi Dam's electricity, Thailand has the responsibility to call for a stop to construction immediately and cancel its power purchase agreement until there is regional agreement to build the dam.  This move by Laos sets a dangerous precedent for the future of the Mekong region. If Laos is allowed to proceed unhindered, then in the future all member governments will proceed unilaterally on projects on the Mekong River. The Mekong Agreement will become yet another useless piece of paper."

"Unless the Mekong crisis is tackled immediately, the future of the region is in great danger," concluded Deetes. "With the Asian and European heads of states gathered in Laos for the ASEM Summit, it's time that the international community takes a strong stand and makes it clear that such actions by Laos will not be tolerated."