Home › News
International coalition calls for emergency sanctions against Indonesian forest fire culprits
Financial regulators are called on to do all that they can to prevent another environmental and public health disaster, as forest fires begin to blaze again in 2016
By: Rainforest Action Network
2016-04-27
Jakarta, Indonesia 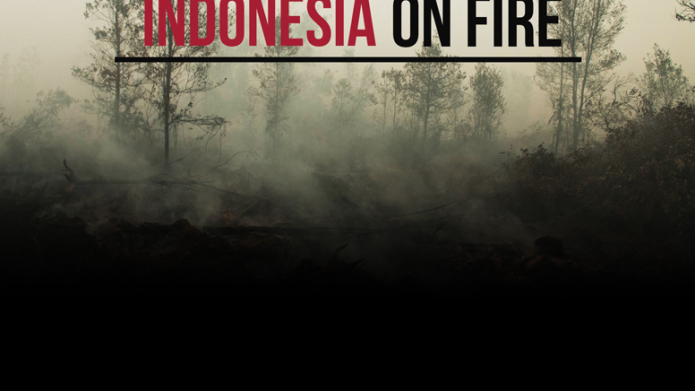 A broad international coalition of over 70 civil society organizations, including Transformasi untuk Keadilan Indonesia (TuK INDONESIA), Walhi (Friends of the Earth Indonesia), Rainforest Action Network, the Sierra Club and BankTrack is calling on financial regulators in Indonesia, Malaysia, Singapore, Japan, China, Europe and the United States to apply emergency sanctions on major commercial banks, in an effort to cut funding from companies identified as causing the forest fire crisis that annually chokes much of Southeast Asia. A joint letter will be sent to over 50 international organisations, including to some of the world's top bank CEOs and financial services regulators.

The region is bracing itself for a repeat of the 2015 haze crisis when wildfires, intentionally set to cheaply clear land for pulp, paper and palm oil production, blazed out of control and blanketed Indonesia, Singapore and Malaysia with a toxic cover of smoke. The haze crisis caused regional evacuations, school and airport closures, hundreds of thousands of cases of respiratory disease and was responsible for at least 19 reported deaths. The smoke from the 2015 fire season was the worst on record and, at the peak of the disaster, released more global greenhouse gas emissions each day than the daily average of the US. By all accounts an environmental and human disaster, the 2015 fire season only ended with the arrival of Indonesia's rainy season.

"This is a horrific, man-made disaster that begins again each year like clockwork," said Tom Picken, a spokesperson for Rainforest Action Network (RAN).

"Big banks are providing much of the capital to fuel the industrial expansion causing this preventable fire crisis. Banks should not be supporting companies that violate anti-fire laws, but they do. Financial regulators must step in and enforce adequate controls and safeguards on these institutions enabling, and profiting from, the harmful and illegal actions of clients," said Picken.

As stated in the joint letter, there were 413 producing companies of tropical forest-risk commodities (such as palm oil, pulp and paper, timber and rubber) linked to burning in 2015. These companies received financial services and investment from more than 20 commercial banks, estimated to be in excess of US $17 billion since 2009.

Currently, new fire incidents are being reported in Indonesia and Malaysia as the 2016 burning season begins.