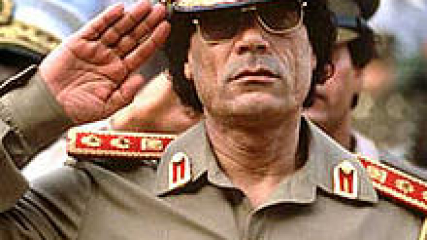 The governments that have frozen funds controlled by Gaddafi, Mubarak, Ben Ali and their cronies should name the banks holding their assets, anti-corruption group Global Witness demanded today. A clear message must be sent to banks that doing business with corrupt dictators is unacceptable: first, those banks holding dirty money should be publicly named and then regulators need to devise a new system which stops banks from taking suspect funds in the first place.

Some $32 billion has been frozen by the US, $3.2 billion by the UK, and other countries such as Switzerland, South Africa, Japan and Austria have frozen funds connected with North African despots. This has been hailed by governments as an achievement, but it actually highlights the catastrophic failure of the anti-money laundering laws that are supposed to have kept dirty money out of the financial system in the first place.

Corrupt rulers control billions of dollars stashed in bank accounts, despite earning far more modest official salaries. By accepting this money, banks are propping up brutal regimes by allowing them to pay off political cronies, rig elections and terrorise their people.

“This rash of asset seizures offers belated recognition that these billions should never have been under the personal control of dictators. On what basis could the banks involved possibly have thought that the funds in these accounts were legitimately earned? The banks shouldn’t have taken the money, and governments shouldn’t have let them take it. These funds belong to Libya, Egypt and Tunisia and the people of these countries now have a right to know where their money is,” said Anthea Lawson, head of the Kleptocracy campaign at Global Witness.

Currently banks are required to do due diligence checks to ensure they know their customer’s identity and source of wealth. If they have concerns the money is illegally earned, they are supposed to file a report with the authorities. The problem is that banks are not motivated to dig deep into their client’s source of wealth because they might find something that makes it hard to accept the money, so they adopt a box-ticking approach to their due diligence checks.

Governments need to send a clear message that this behaviour by banks is unacceptable. As well as naming the banks that hold the frozen funds, they must devise, and effectively implement, a new approach which stops banks doing business with those dictators not currently making headlines. This must account for three key principles:

- If a bank cannot get its senior politician customers to explain their wealth, then it should turn down the money.  Senior officials should be able to explain how their assets were earned legitimately, especially if there is a significant difference between their official salary and their actual wealth. If they cannot explain there should be a presumption that that their funds are the proceeds of corruption. This concept of “illicit enrichment” is already recognised in international treaties such as the United Nations and the Inter American conventions against corruption.

- Banks and other investment managers should disclose full details of state assets that they manage. In a dictatorship where one individual, or a small cabal, exercises almost complete power over the state, there is a very thin dividing line between state and personal investments. For example, it appears that Gaddafi has significant personal control over the state funds invested in the Libyan Investment Authority. These funds may look like they belong to the state but are actually under the effective personal control of a ruler who has captured the state. The citizens of countries such as Libya have a right to know where state funds are being held and what they are being spent on.

- Such measures should be accompanied by national registries that list the ultimate owner or controller of companies and trusts. Corrupt politicians hide their identity, and therefore their assets, behind complex webs of front companies and legal structures. This can make it very difficult for banks, or law enforcement, to find out who actually controls assets.

“A new approach is need to tackle corruption and dirty money. This isn’t just about fast cars and luxury yachts. It’s what allows dictators to stay in power beyond the wishes of their people. Even if banks are technically compliant with the law, they are hiding behind regulatory failings to continue their profit-driven dirty pact with corrupt tyrants,” said Lawson.