Home › News
Friends of the Earth US statement in support of Occupy Wall Street
By: Michelle Chan
2011-11-08
Washington, DC 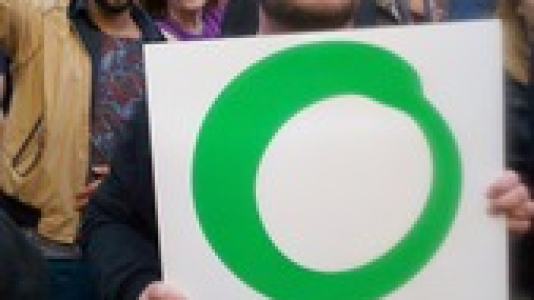 The hope and ambition of the Occupy movement has reminded us that we need to remake financial and economic systems so that they serve people and the planet, not the other way around. We are challenged to consider ways in which we can not only resist market fundamentalism, but help create new models that promote prosperity, social equity and environmental sustainability.

The recent outpouring of public support for fundamental economic justice, as expressed through the Occupy Wall Street movement, has inspired and energized those of us at Friends of the Earth.

The Occupy actions are a moral response to massive and growing inequality in the United States and around the world, which manifests itself not only through disparities of wealth and opportunity, but of political power. In the last decade, the influence of big business has expanded to such an extent that our civil and political systems have largely been captured by corporate lobbyists and campaign donations.

The gross imbalances of economic and political power between the one percent and the rest of society are the result of decades of misguided ideology (neoliberalism) that has exalted unrestrained markets, denigrated government and maximized the influence of corporations over our economic and political lives. Today, functions that were once the domain of the public sector -- from the provision of services, to the protection of our commons, to the fighting of our wars and even the writing of our laws -- have been taken over by corporations that put profit before the public interest.

The financial sector, in particular, has created for itself an outsized role in our economic and political systems. At its height, the financial sector accounted for some 40 percent of U.S. GDP, a product of its ability to concentrate wealth and then use that wealth to make money off of money. But it is becoming increasingly clear that the well being of Wall Street is not necessarily linked with the well being of society at large; today, we see that vast amounts of wealth can be amassed by an elite in the speculative economy and yield jobless "growth" that offers little benefit to most people's lives in the real economy.

Over the past two decades, Wall Street's growing economic power also provided it with greater political and marketing power; not only was the financial sector able to buy deregulatory favors in Washington, but it also wove an enticing narrative around the wisdom and superiority of financial markets that captured the imaginations of policymakers and the public alike.

Unfettered markets and the pursuit of self-interest became not just the basis of our economic policy, but the answer to social inequality and environmental problems. Just a few short years ago, carbon trading became the centerpiece of our national climate change agenda. Many environmentalists were ready to create a massive carbon derivatives market and hand it over to Wall Street - even at a time when big banks had just destroyed our economy and forced us to bail them out.

We are all now facing the stark fiscal consequences of that bailout, and the job destruction caused by unregulated recklessness on Wall Street. Now the time has come for the environmental movement to acknowledge that the struggle for economic and environmental justice is one and the same. Rising unemployment, along with the bank bailout, the economic rescue package, two wars and the Bush tax cuts have forced us into a budget deal in which the middle class, the poor, the marginalized and the environment are bearing the burden while the one percent fail to shoulder their fair share.

Unless we act in solidarity with those engaged in diverse struggles for justice, environmental groups run the risk of protecting our parochial interests while harming the broader public interest. Although tax reform is not typically considered part of the environmental agenda, environmentalists should be working not only for the end of polluter tax giveaways, but also for the end of the Bush tax cuts, the imposition of a Wall Street transactions tax, a stop to offshore tax avoidance, increased taxes for the wealthy, and other progressive tax policies. Progressive tax, economic and financial policies are not only critical for our environment, but are also fairer and more equitable for our society.

We stand with those in the Occupy Wall Street movement and salute their efforts to refocus the national conversation on how wealth and power have become increasingly concentrated, and we call on others, especially in the environmental community, to show their support.

The moral outrage of the Occupy movement has made us recommit ourselves to our work in the areas of democratic governance, corporate power, tax and budget policy, big banks, trade rules and financial markets and regulation. We believe that poorly formed policies in each of these areas drive environmental destruction.

The vitality of this movement has been a strong reminder to us at Friends of the Earth that mass movements have usually been the basis for progressive change in our country and around the world. While we will continue to advocate for accountability and change in Washington, we recognize that change will not come from Washington -- it will come to Washington.