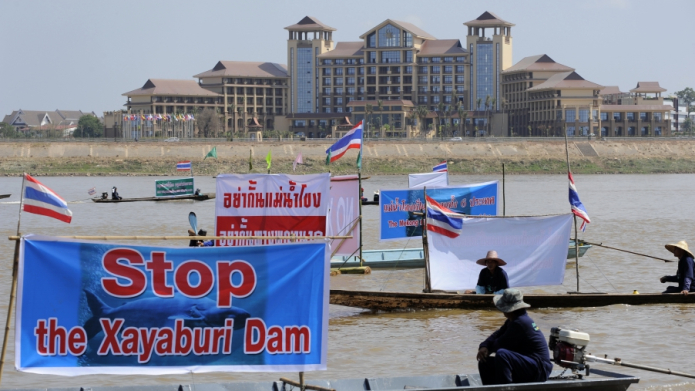 On November 9, only four days after Laos announced the official start of construction on the Xayaburi Dam, Finnish company Pöyry announced that it has taken on a central role in the project. According to the company’s press release, “Pöyry will support the Government of Lao and the project owner Xayaburi Power Company Limited during the 8-year implementation period by reviewing the design and supervising the construction of the project.

In doing so, Pöyry publicly shows for the first time how it has benefited financially from its controversial 2011 study that downplayed the project's environmental and social impacts.

Regardless of whether you believe that this dam can be built in a sustainable way, it is clear that the diplomatic negotiations have been ugly. Call it what you prefer – corruption, unethical behavior, or intentional disregard for the rules of good faith cooperation between nations. Either case warrants an intervention from the governments that have stood on the sidelines throughout this conflict.

Pöyry, if you recall, conducted the study that Laos has used to argue that the Xayaburi Dam will not have transboundary impacts. In May 2011, Laos hired Pöyry to evaluate the project's compliance with the requirements of the Mekong River Commission (MRC), shortly after Cambodia and Vietnam first raised concerns about the project's downstream impacts and requested that a transboundary environmental impact assessment be carried out. The MRC is the diplomatic body that is supposed to promote joint cooperation in use of the shared Mekong River.

Pöyry determined that the project was “principally in compliance” with the MRC’s standards for dam-building, despite identifying over 40 additional studies that are still needed to understand the project’s impacts. In cases where the project was unlikely to meet the MRC’s requirements (e.g. for fish passages or dam safety), Pöyry simply omitted any mention of those requirements. Pöyry also recommended that construction continue while these studies were carried out. Scientists widely criticized the study, given the significant risk that many of the project’s impacts cannot be mitigated by the unproven technologies that Pöyry proposes to use.

In June 2011, Pöyry also provided legal advice to Laos that the project could proceed despite opposition from neighboring countries. Laos explicitly cited Pöyry when informing developer Ch. Karnchang and the Thai government that the MRC “prior consultation” was completed. In contrast, the official MRC position at the time was that the Mekong governments had “agreed that a decision on the prior consultation process…be tabled for consideration at the ministerial level, as they could not come to a common conclusion on how to proceed with the project.” Afterwards, without informing neighboring countries, the Lao government allowed construction on the project to continue. Pöyry remained involved in the project.

From the beginning, Pöyry 's credibility was in question because of its close business ties to Ch. Karnchang, the company it was asked to evaluate. Pöyry also had a strong financial incentive to skew its 2011 study in order to provide the Lao government with a positive review – doing so brought the company several years' worth of additional revenue.

After Cambodia and Vietnam criticized Pöyry‘s work in late 2011, the Lao government hired Compagnie Nationale du Rhône (CNR) to provide a peer review of Pöyry’s work related to sediments. CNR suggested several changes to Pöyry’s sediments model and did not review Pöyry’s fisheries model. In August 2012, CNR issued a press statement clarifying that it had only presented a “conceptual” model of the dam and that further studies were still needed, in contrast to Pöyry’s view that construction should continue.

After International Rivers discovered in June 2012 that construction activities were well underway, the Lao government invited a delegation of foreign governments to visit the dam site in July. (At the time, the Lao government referred to all activities as “preliminary work” and repeatedly promised that construction would not start until neighboring countries’ concerns were addressed.) Pöyry led the July 2012 visit, making presentations that portrayed the project as environmentally responsible. The Lao government – in cooperation with the state-run Vientiane Times – lobbied hard to present the Pöyry and CNR studies as proof that neighboring countries' concerns with the transboundary impacts had been addressed.

Meanwhile, Laos refused to conduct studies on the Xayaburi Dam’s transboundary impacts. At most, only a few months' worth of baseline data were collected to ground-truth Pöyry’s promises. The project’s original environmental impact assessment only examined what would happen 10 kilometers downstream from the site, which severely limited the amount of data on which Pöyry based its models.

Is Silence the Same as Approval?

By November 2012, the Lao government appears to have successfully convinced the Cambodian and Vietnamese governments to buy into the Pöyry and CNR studies. Both countries continued to call for further studies on the Xayaburi Dam’s impacts, but no longer called for these studies to take place before construction began as scientists had recommended. Both governments may have felt that Laos' continued construction made the project inevitable by this point, and that a strong intervention jeopardized the countries’ close economic ties. Indeed, by this point almost all discussions have been taking place outside the MRC framework and there was little leverage left provided by the 1995 Mekong Agreement between the countries.

For the past several years, donor governments such as Australia, Finland, Germany, and the United States have financially kept the MRC afloat. The commission is supposed to serve as the key framework for promoting cooperation around use of the Mekong River, the region’s largest shared natural resource. On Pöyry’s advice (and to its financial benefit), the Xayaburi process has moved far outside the MRC. No government has criticized Laos’ recent decision to proceed with the project, except for the United States. Nor has any government criticized the way that Laos and Pöyry have undermined the MRC. People throughout the region are outraged. The tolerance for corruption around the Mekong dams, it seems, is quite high.

The Xayaburi Dam has become a stark example of why governments need to strengthen oversight of the overseas activities of their companies. Finland in particular should not allow its companies to exploit the authoritarian nature of governments such as the one in Laos. This is not the same as saying that Laos and Pöyry cannot build dams – rather, it is saying that they must play by the rules to do so.