For more information and interviews: 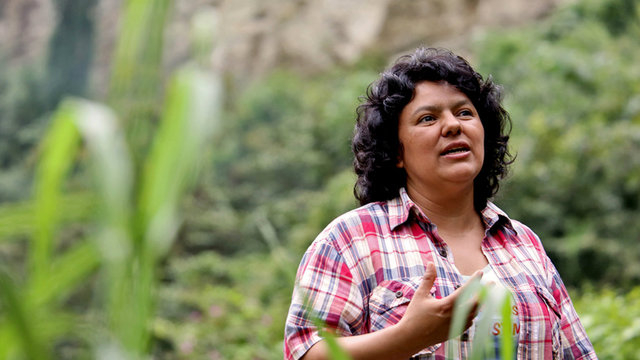 Global Witness welcomes the news that the Dutch and Finnish development banks behind the deeply controversial Agua Zarca hydropower dam in Honduras - which led to the murder of acclaimed land defender Berta Cáceres - have withdrawn their backing for the project.

But the organisation warns that the banks urgently need to commit to concrete action to protect environmental and land defenders if they are to ensure future financing does not contribute to the abuse and violence suffered by thousands of activists every year.

The banks’ move follows years of pressure by COPINH, the indigenous movement headed up by Berta Cáceres, and by Global Witness and other national and international groups.

“We welcome the news that the international investors behind the Agua Zarca dam are finally pulling out. However, these same investors were silent when dozens of death threats were made against renowned Honduran environmentalist Berta Cáceres, who was then murdered for protecting her community from this destructive project.

“Investors have a duty to speak out when activists opposing their projects are threatened. They need to put in place proper policies to protect environmental defenders, and freeze their investments if local populations are threatened or attacked. People’s lives depend on it.”

The Netherlands Development Finance Institution (FMO) and Finnish Fund for Industrial Cooperation (Finnfund) say they have withdrawn from the project in a move 'intended to reduce international and local tensions in the area'.

As a national development bank, FMO has an obligation under international law to respect the rights of those affected by the activities it finances and support those who raise their voices in dissent. It must now take concrete action to ensure cases like Agua Zarca never happen again, including outlining how it will support defenders through the human rights policies it is currently drawing up.

More than 120 people have died in Honduras since 2010, according to Global Witness research, making it the most dangerous country per capita to be a land or environmental defender. In 2015 185 people globally were killed for defending their land, rivers and forests against destructive industries whilst countless others have been murdered, threatened, imprisoned or criminalised in the pursuit of their rights.

Two of the eight men detained in relation to Cáceres’ killing were ex-employees of the Honduran company building the dam, Desarrollos Energéticos SA (DESA). Despite this, FMO has said that 'the lenders note that no proven connection has been established between DESA and allegations regarding any illegality'. DESA has denied any involvement in the murder of Berta Cáceres or in any other violence linked to the Agua Zarca dam.