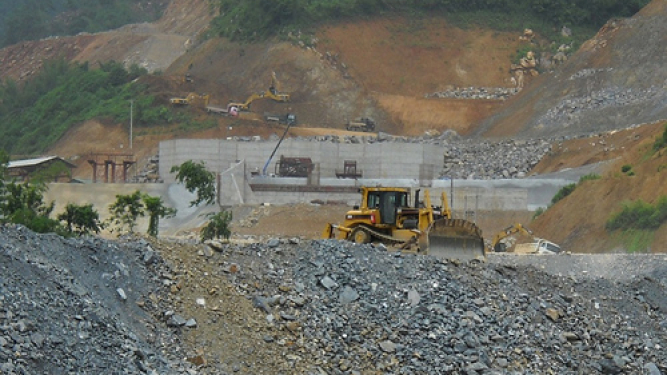 Bangkok, Thailand – A recent investigation of the Xayaburi Dam site by International Rivers revealed that Thai company Ch. Karnchang has already undertaken significant resettlement and construction activities, contrary to claims that only preliminary work is underway.

Despite Ch. Karnchang’s recent statements that it will comply with the Lao government’s commitment to postpone construction until there is regional agreement, International Rivers found construction activities underway during a visit last week to the dam site and 15 affected villages. Recent activities include dredging to deepen and widen the riverbed at the dam site, the construction of a large concrete retaining wall, and an increase in the company’s local labor force. One village, Houay Souy, was already resettled from the dam’s planned spillway to near Xayaboury town in January 2012.

Ame Trandem, Southeast Asia Program Director for International Rivers, said, “By proceeding with resettlement and construction on the Xayaburi Dam, Ch. Karnchang has blatantly defied the diplomatic process underway to decide on the future of the Mekong River. The company has violated the trust of the governments of Cambodia, Laos, Thailand, and Vietnam, with apparent impunity.”

On June 2, Mr. Aswin Kongsiri, Chairperson of the Ch. Karnchang Board of Directors told the Bangkok Post that “the Lao government will ultimately make the final decision on whether the project will go ahead, but we want to wait for all stakeholders in the Greater Mekong Subregion to agree with it.” Mr. Aswin indicated that the company had not yet started construction, stating “we have thus focused on project preparation, mainly financing and the environmental impact report.”  These claims came weeks after the Lao government publicly announced that dam construction had been postponed and only “preliminary construction” such as building access roads had taken place.

“So far, Ch Karnchang claims that they are only going forward with ‘preliminary construction’ on the project, but the definition of ‘preliminary’ keeps expanding,” said Kirk Herbertson, Mekong Campaigner for International Rivers. “Ripping up the riverbed and resettling entire villages cannot be considered a preliminary activity.”

Interviews with resettled families from Houay Souy revealed a series of broken promises made by Ch. Karnchang. Resettled households have yet to receive new agricultural land and have been required to spend much of their own compensation money to finish building the houses that were provided to them. Ch. Karnchang also reneged on a promise to provide one year of free electricity and water. Instead villagers were provided only one month free. The company has informed other villages that they will be moved as soon as December 2012, but said they will not compensate the villagers for the loss of fisheries, access to agricultural land, gold panning, and other major sources of food and income, in violation of Lao law.

Teerapong Pomun, Director of Thai NGO Living River Siam, who joined the trip to the dam site, said, “Even at this early stage, the Xayaburi Dam is causing harm to local people and the environment. Ch. Karnchang needs to be held accountable for its irresponsible and illegal behavior. It’s only a matter of time before the damage to the river’s ecosystem and fisheries begins to impact downstream countries like Thailand, something the company has failed to even take into account.”

On June 28-29, the governments of the Mekong River Commission (MRC) will meet with development partners in Vientiane, Laos for the MRC’s Informal Donor Meeting 2012. The issue of the Mekong mainstream dams is expected to be on the agenda.

“Ch. Karnchang’s ongoing construction activities are creating conflict among the Mekong countries,” said Mr. Herbertson. “No construction should be allowed that places future cooperation along the Mekong River in jeopardy. It’s time for the Thai and Lao governments to hold firm to their commitments and require Ch. Karnchang to respect the diplomatic process.”

In addition to Ch. Karnchang’s role, Thailand has close links to the Xayaburi Dam. The project is being financed by Thai commercial banks. An estimated 95% of the dam’s electricity would be sold to Thailand. In July, communities from eight Thai provinces along the Mekong River are expected to bring a lawsuit against the Thai government for signing an agreement to purchase the dam’s electricity in violation of their constitutional rights.