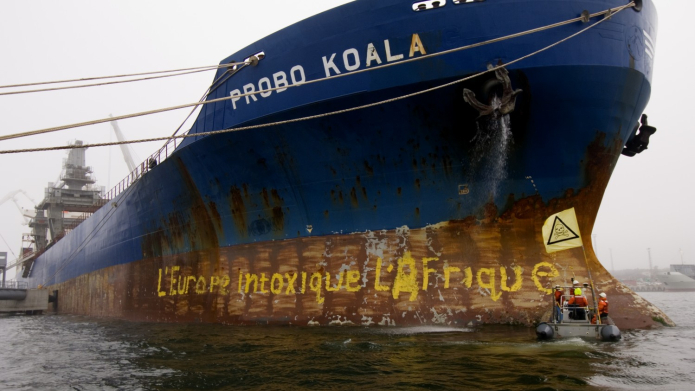 Founded in 1993, Trafigura is a multinational commodity trading company and one of the world’s three largest independent oil traders (with Vitol and Glencore). The company is incorporated in Singapore and operates globally. The company was established in 1993 by Claude Dauphin and Eric de Turckheim.

The company’s immediate holding company is Trafigura Beheer, a company incorporated in the Netherlands. Trafigura Beheer is ultimately controlled by Farringford Foundation, which is established under the laws of Panama.

Trafigura is one of the major traders of Russian oil and has deep connections with Russian state-owned oil majors. The company is also widely known for a 2006 scandal in which a ship chartered by the company, the Probo Koala, was caught dumping toxic waste in Abidjan in Ivory Coast. The company has also been a focus of campaigning due to its involvement in dumping high-sulphur fuel in African countries.

Trafigura ongoing business activities with Russian oil giants Trafigura is one of the major Russian oil traders and has deep connections with Russian state-owned oil giants. Despite its public condemnation of the war and commitment to stop buying Russian crude oil, Trafigura still maintains commercial ties with Rosneft. Trafigura also owns a 24.5% stake in Nayara Energy, which some trade sources and Refinitiv report has bought 1.8 million barrels of Urals oil from Trafigura in a deal signed after Russia’s invasion of Ukraine.

By keeping doing business with Russian oil majors, Trafigura contributes to Russia’s ability to finance the war and to war crimes and human rights breaches in Ukraine, something that is no more acceptable especially after Russia’s illegal annexation of four Ukrainian regions and mobilisation decree.

As African cities grow and traffic-related emissions get higher, the poor quality of the diesel available will make people inhabiting the West-African region more and more exposed to the adverse effects of particulate matter and air pollution, such as premature death and illness. A 2017 BankTrack briefing challenged banks financing Trafigura to show how they responded.

The Probo Koala toxic waste incident, Akouédo, Ivory Coast In August 2006, Trafigura dumped a large amount of toxic waste on board the cargo ship Probo Koala. As a consequence of the toxic waste dumping, 17 people died and tens of thousands were exposed to the toxic waste. More than 15 years since the incident, the social and human rights impacts are still extensive.

People in the affected area suffered from serious health issues, such as throat cancer, miscarriages, skin issues, strong migraines, etc. Water sources were depleted, affecting the availability of drinkable water. As crops were damaged, thousands of people were exposed to food insecurity. In 2019, the government of Ivory Coast finally closed the Akouédo dump.

The company's last sustainability report states that its emissions related to fuel and energy activities, upstream transportation and distribution, business travel, upstream leased assets and investments increased by 21% in FY2021 to 14.5 million tons of CO2. It was also estimated that in the same year Trafigura’s downstream emissions, including those of its mines, Nystrar smelters and refinery in Argentina, comprised an additional 32.2 million tons of CO2.

The Probo Koala toxic waste incident, Akouédo, Ivory Coast The Probo Koala toxic waste dumping caused major adverse impacts on the environment. As a result of the illegal waste disposal, air in the dump area was polluted, water and soil contaminated, and biodiversity lost. The hydro and geological system suffered from a large-scale disturbance, while episodes of floods (river, mudflow and coastal) increased. As of now, Trafigura still refuses to disclose exactly what was in the toxic waste.

Trafigura has adopted its own policies, including a) Business Principles on Health and Safety, Environment, Human Rights and Labour Practices, and Community Relations; b) the Anti-Bribery and Corruption Policy – Code of Business Conduct and c) the Corporate Responsibility Policy.

Five countries in West Africa have decided to stop importing "dirty fuels" from Europe, the UN Environment Programme says. A recent report revealed that European companies were exploiting weak regulations in West Africa to export fuels with high levels of sulphur. Nigeria, Benin, Togo, Ghana, and Cote d'Ivoire agreed on the import ban. The UN says the move will help more than 250 million people breathe safer and cleaner air. The sulphur particles emitted by a diesel engine are considered to be a major contributor to air pollution and are ranked by the World Health Organization (WHO) as one of the top global health risks. It is associated with heart disease, lung cancer and respiratory problems (source BBC).

Swiss commodity trading companies, including Trafigura and Vitol, take advantage of weak fuel standards in Africa to produce, deliver and sell diesel and gasoline, which is damaging to people’s health. Their business model relies on an illegitimate strategy of deliberately lowering the quality of fuels in order to increase their profits. Using a common industry practice called blending, trading companies mix cheap but toxic intermediate petroleum products to make what the industry calls “African Quality” fuels. Read the full report here.

Trafigura’s annual report 2021 states that the group works with over 140 banks worldwide. In the period between 2016 and July 2022, Trafigura received more than US$ 100,515 million in loans and underwritings (data from Profundo).

In 2021, Trafigura financed a US$2,400 mln Revolving Credit Facility with a one-year maturity. Thirty banks participated in the transaction, including Mizuho Bank, Oversea-Chinese Banking and Westpac Banking as lead arrangers (data from Profundo).

In 2020, Trafigura financed a US$5,420 mln Revolving Credit Facility with a three-year maturity. In total fifty banks participated in the transaction, including Banco Santander, Bank of Montreal, Barclays, Crédit Agricole, Crédit Suisse, JPMorgan, Natixis and UBS as lead arrangers (data from Profundo).

Fuel 'too dirty' for Europe sold to Africa

About a company called Trafigura, a ship called the Probo Koala, and the dumping of toxic waste in Côte d’Ivoire
2012-09-25 00:00:00 | Amnesty international and Greenpeace Netherlands
ngo documents