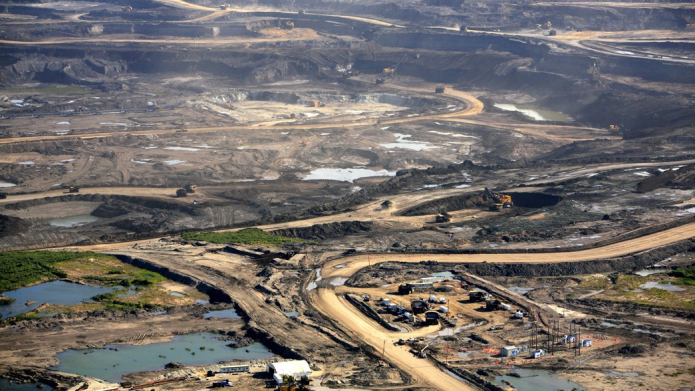 Tar sands are deposits of sand, clay, water and ‘bitumen': a viscous liquid that can be processed into oil products. The total known world reserves amount to the equivalent of 6 trillion barrels of oil - more than the conventional oil reserves.

Oil production from tar sands is around 21% more carbon-intensive than conventional oil. Tar sands projects also differ from other oil projects in that they have massive upfront capital costs, meaning oil prices would have to rise and remain high for most new tar sands projects to break even. This risks decades of locked in carbon emissions.

On top of their climate impacts, tar sands are also responsible for major and disastrous impacts:

For all these reasons, Tar Sands production must be stopped.

The 2018 Fossil Fuel Report Card revealed that private bank financing for the tar sands industry went up by 111% in 2017. This is an alarming increase that must be urgently reversed. To avoid the devastating impacts of their investments, banks must take steps to disengage from all activities and projects that substantially contribute to climate change and environmental and communities degradation. They must end support for all new oil extraction and delivery, starting with Tar Sands.

The Canadian province of Alberta has total proven oil reserves of 165.4 billion barrels, according to the state government. This amounts to about 11 percent of total global oil reserves. In 2017, 2.8 million barrels of oil were produced from tar sands each day in Alberta. Capital investment in Alberta's upstream energy sector, including oil sands, conventional oil and gas, mining and quarrying was estimated at $26.5 billion in 2017 and is forecast at $23.7 billion in 2018.

According to the Canadian government, GHG emissions from tar sands production increased by 367% between 1990 and 2016, more than half of which came from the growth of in situ production. In that period, crude oil production more than doubled in Canada. In addition, thousands of acres of boreal forests are cleared to make way for tar sands operations. These forests represent more than 25% of the remaining primeval forests on our planet. The destruction of these forests is fatal for the climate. They retain more than 47 billion tonnes of CO2. Many NGOs are campaigning to put a halt to all tar sands projects. The First Nations indigenous groups in Canada are also protesting against the extraction of oil from tar sands. At the 2010 Annual General Meeting of the Royal Bank of Canada, a significant financier of the tar sands industry, a representative of the First Nations described the environmental impact of the tar sands as an ‘environmental holocaust'.

Besides the impacts on the environment, tar sands production also causes water and air pollution. George Poitras, a former leader of the Mikisew Cree First Nation, states: "We are seeing a terrifyingly high rate of cancer in Fort Chipewyan where I live. We are convinced that these cancers are linked to the tar sands development on our doorstep. It is shortening our lives. That's why we no longer call it ‘dirty oil' but ‘bloody oil'. The blood of Fort Chipewyan's residents sticks to the hands of these companies."

For more information on this, see the following Dodgy deals:

Through their lending, investment, and other financial services, commercial banks play an indispensable role in mobilizing and allocating financial resources for the private sector. As such, they are in a unique position to either help further entrench patterns of energy production and intensive energy use that are based on the burning of fossil fuels, or to catalyse the necessary transition to an economy that minimizes GHG pollution and relies on energy efficiency and low- to zero-carbon energy sources.

Financing climate solutions won't be enough to address the challenges of a changing climate. Indeed, banks must take steps to disengage from all activities and projects that substantially contribute to climate change, and must end support for all new oil extraction and delivery, starting with Tar Sands.

oil and gas | transport and infrastructure
There are no projects active for Banks and tar sands now.
on record

oil and gas | transport and infrastructure

Commonwealth Bank of Australia out of thermal coal by 2030

But new policy is no isolated move - finance for tar sands will dry up, just as it is doing for coal.
2018-08-09 | Ryan Brightwell – BankTrack
blog
external news
our news

One Planet Summit: A round up of new fossil fuel policy announcements

Has RBS stopped financing the tar sands? (Spoiler: No).

Tar Sands and the Carbon Numbers

No Consent? No Pipeline!

A fund for climate chaos: RBS investment in tar sand exploitation is a highly irresponsible use of public bailout money

UK taxpayers are funding the destruction of my homeland

Greenpeace vs the Alberta Oilsands

New film: Tar sands – to the ends of the earth

The documentary shows how Madagascar's rural population and its fragile eco-system will be devastated if oil companies start exploiting tar sands in the country. The film documents campaigners from Friends of the Earth Europe, USA and Madagascar travelling to Canada to witness the devastating impact that tar sands are having in the only country where they are currently commercially exploited.
http://www.foeeurope.org/tar-sands-ends-of-earth-film-170613

Oil Sands Truth exists to disseminate information regarding the environmental, social and economic impacts of tar sands development projects being proposed and currently in progress.
http://oilsandstruth.org/

A campaign by The Co-operative Bank in partnership with WWF-UK.
http://www.co-operative.coop/toxicfuels