Home › Blog
‘We should/could ensure rights-holders affected by our clients’ activities have greater access to remedy, but we won’t let them know about it’
The Dutch Banking Sector Agreement’s Discussion Paper on Enabling Remediation
By: Benjamin Grama
2019-06-26 Share this page: 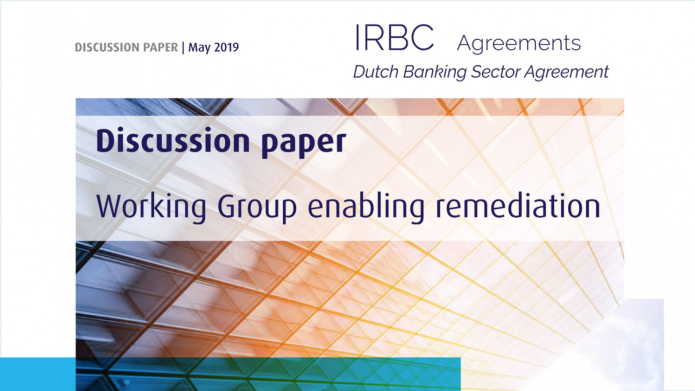 This is a guest blog by Benjamin Grama. This post was originally posted to the Business and Human Rights Journal’s blog and is reposted here with permission.

On 24 May 2019, the Dutch Banking Sector Agreement (DBA) published a discussion paper on enabling remediation, which explores the role and responsibility of banks with regard to remedying human rights impacts. This report is the latest in a long line of reports and letters specifically on the responsibility of banks under the UN Guiding Principles on Business and Human Rights (UNGPs) and/or OECD Guidelines for Multinational Enterprises (Guidelines), including

The DBA’s discussion paper on enabling remediation represents the first multistakeholder consensus achieved through discussions between banks, civil society organisations, and government officials – albeit wholly from within the Netherlands. In describing the paper, I will detail why the paper was written, describe what the paper covers and its two key contributions to the debate, and conclude with a short analysis of the paper.

A Dutch Approach to B&HR

The DBA is one of eight ‘IMVO covenanten’ including two others on the financial sector: one on the insurance sector (in Dutch) and one on pension funds (in Dutch). The creation of these agreements is part of the Dutch National Action Plan on Business and Human Rights and follows a report to the Dutch government which recommended their usage.

The DBA is almost solely focussed on compliance with the UNGPs and Guidelines, specifically in the context of project finance and corporate lending activities. The content of the agreement broadly follows the requirements of the second pillar of the UNGPs: it requires banks to have a policy commitment to respect human rights, human rights due diligence procedures, to enable remediation, and to be transparent in doing so.

Unlike due diligence measures and human rights policies, banks have almost no experience providing remedy, at least directly. No commercial bank has a grievance mechanism (or alternative remedial process) to date, and this agreement was negotiated against a backdrop of (some) banks fiercely contesting the idea that they ever cause or contribute to human rights impacts resulting from any of their financing activities, arguing they are never required to remediate impacts in practice.

Against this backdrop, the DBA set up a working group on ‘enabling remediation’, which included representatives of parties to the DBA and external experts, to bring about further consensus on this issue. It was mandated with the task of answering two questions:

This exploration does not create new obligations for adhering banks under the DBA; it intends to generate news learnings for banks (in and outside NL) to learn from and to act as input into the parallel OECD processes elaborating on the responsibility of banks under the Guidelines.

What banks could do and what banks should do

The resulting discussion paper discusses the context , roles for banks , and the nature of a bank’s responsibility . The report puts forward recommendations without couching them in terms of responsibility, allowing it not to be limited to the ceiling of what the working group’s participants believe is required under the UNGPs/Guidelines. The report also puts forward an understanding of responsibility which does not mention what banks currently do or real-life cases, avoiding any commentary on if-and-when banks have failed to meet their responsibilities in practice.

This means anyone hoping for an unequivocal statement that ‘banks should do X’ or ‘banks are failing their responsibility to do Y’ will be disappointed; it is potentially possible someone who believes banks’ current practices are already sufficient under the Guidelines/UNGPs to read this report consistently with that belief, provided they employ a concerted effort to reach that conclusion. However, these sections are not islands and do largely cohere with each other, allowing the paper to explore routes forward which are sensitive to both market realities and normative expectations, while not capitulating to either.

The paper follows two recent trends in interpretive guidance: the relevance of remedy where banks are directly linked and the central role of due diligence to determining the category of responsibility a bank finds itself in (contribution or directly linked). The paper states that remedy is relevant not only when business enterprises cause or contribute to adverse human rights impacts but also when they are directly linked to them. Remedial mechanisms should be part of an ‘ecosystem’; banks could ‘enable’ remedy across all forms of connection. The report focusses on how banks could increase and exercise their leverage over their clients to provide remedy, including going beyond checking whether a client has a grievance mechanism by better assessing its effectiveness, supporting its effectiveness and advocating for better grievance mechanisms across the board.

The report pays less attention to how banks can provide remedy directly: it discusses banks having their own mechanisms, suggested by the OHCHR, but stresses the difficulties involved in terms of accessibility and in compelling other business enterprises to engage in the process. It suggests that a bank-level mechanism is ‘particularly appropriate if the remedy sought is changing the due diligence or business practices of the financing institution.’

From an effective remedy standpoint, there is certainly credibility in the argument that it is better for most adversely impacted rightsholders to have access to remedial channels in their locality rather than from a Dutch bank’s grievance mechanism in Amsterdam. One could argue, however, that the question of whether to enable remedy through others or to provide it directly is something of a false dilemma.

The paper also places the sufficiency of a bank’s due diligence at the forefront of determinations of whether banks are contributing or directly linked to adverse human rights impacts arising from a third party. This means due diligence is understood as not simply a series of steps businesses can take to discharge their responsibility to respect but part of the standard of conduct itself.

Six factors are identified: 1) the initial knowledge of the bank when it entered into the transaction, 2) the bank’s engagement with the client and/or other stakeholders, 3) how the client has behaved within any prexisting relationship with the bank, 4) incorporating binding expectations into loan agreements with the client, 5) engagement with the client after the impact, and 6) the quality of any third-party risk assessment. If, based on these factors, a bank’s due diligence is adequate then the bank is directly linked, otherwise it is contributing. The report utilises some examples of how these factors play in practice. It leaves considerable discretion as to how these factors should be weighed together.

This approach is perhaps favourable to attempting to draw an inevitably arbitrary binary line around a bank’s responsibility, and it is coherent with recent guidance presented by the OHCHR, Ruggie and in scholarship. However, it does raise some issues for how external stakeholders can determine whether a bank has contributed to an impact, and this is my key cause for concern with this paper.

There may be next steps, but you’ll never know if they are taken

The paper no doubt continues a trend in further elaborating on banks’ responsibilities under the UNGPs/Guidelines. It represents the first time banks have accepted any serious role with respect to remedy and is largely consistent with existing guidance. On that basis, it is to be welcomed, but, like the tree in a forest, if a bank carries out fantastic due diligence and enables remediation, but there is no one around to hear it, does it make a sound?

The paper asserts that client confidentiality prevent banks from engaging with external stakeholders, citing legal advice commissioned by the DBA. This advice concluded that individual client information (including the existence of a relationship) cannot be voluntarily disclosed unless there is the consent of the client, largely on the basis of contractual requirements banks enter into with their clients. In most of the situations anticipated by the paper, banks cannot comment on the steps they have taken with respect to their due diligence processes with their clients.

The paper views improving access to remedy as how banks can leverage their clients to provide remedy, and it bases it determinations over whether a bank should provide remedy on the adequacy of a bank’s due diligence with its client. This means both the question of when a bank should provide remedy and whether a bank has enabled remedy can only be answered with those who have access to information on the bank’s relationship with the client: the bank and the client. While there is discussion of banks providing remedy directly and having bank-level mechanisms, it is difficult to see how these would work in practice if the bank does not reveal the vast majority of its financial connections.

From an effective remedy standpoint, the logics of the discussion paper make perfect sense: ensure remediation is enabled close to the rightsholder to provide a greater likelihood of effective remedy and connect the adequacy of due diligence to categories of responsibility to ensure that banks are incentivised to take steps to prevent harm to people. However, from an accountability standpoint, it could be read that, by focussing on banks’ often behind-the-scenes efforts, the practical consequence of this logic is to curtail outside scrutiny of what banks do in meeting their responsibility to respect human rights.

Benjamin Grama is a PhD candidate in business and human rights at Tilburg Law School in the Netherlands. His PhD research deals with the effects of the UN Guiding Principles on Business and Human Rights' endorsement of operational level, non-judicial grievance mechanisms and their role in improving access to remedy. From November 2016 to December 2017, he worked on the Dutch Banking Sector Agreement as a representative of the three civil society organisations party to the agreement (Pax, Amnesty International Netherlands and Oxfam Novib). He has previously written an article and a blog on the multistakeholder agreement. The views and opinions expressed in this blog are his and do not reflect the official policy or position of any organisation.