Home › Blog
Total’s suspension of the East African Crude Oil Pipeline is a chance for Standard Bank and others to think again
By: Ryan Brightwell – BankTrack
2019-09-19 Share this page: 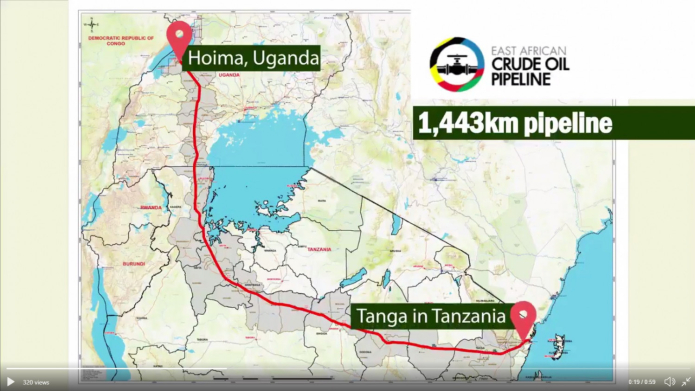 Plans for a 1,443 kilometre heated crude oil pipeline from Uganda’s oil fields to Tanzania’s coast have hit the rocks, with Total SA confirming earlier this month that it has stopped work on the East Africa Crude Oil Pipeline (EACOP) project until further notice. The announcement followed news that Tullow Oil, the London-listed oil exploration company, had been forced to shelve its plans to sell the majority of its 33.33% stake in its Ugandan oil projects to Total and China National Offshore Oil Corporation (CNOOC) due to a disagreement with the Ugandan government over tax.

The news comes only a few weeks after a gung-ho announcement from Stanbic Bank Uganda, a subsidiary of South Africa’s Standard Bank, that Uganda “will be able to get the money it needs” for the project, and that forming a syndicate to provide the USD 2.5 billion in project finance loans needed for the pipeline “is not a problem”.

BankTrack and several other civil society groups, many from Uganda and neighbouring countries, wrote to Stanbic and Standard Bank, alongside Sumitomo Mitsui Banking Corporation (SMBC) of Japan, also a lead arranger of the EACOP project loan, back in May to raise substantial concerns about the threats posed by the project to water, endangered species and local people’s livelihoods posed by the project, as well as its climate impacts. Standard Bank’s response in July did not address any of these material concerns, and stressed that “no decision has been made at this stage to provide lending to this project”.

However, from its statements to the press it seems Standard Bank is eager to finance the pipeline. Total’s suspension gives the bank the chance to pause and think again. As the current chair of the Equator Principles, the bank rules for managing environmental and social risk in project finance, Standard Bank would be well advised to avoid association with what looks like another Equator Principles disaster project in the making.

The Environmental and Social Impact Assessment (ESIA) for the Ugandan portion of the EACOP pipeline was published earlier this year for public consultation, but it is fair to say it has not been well received. The Africa Institute for Energy Governance (AFIEGO), a Ugandan public policy research organisation, has called on Uganda’s National Environmental Management Authority (NEMA) and Ugandan citizens to reject it. AFIEGO’s analysis of the gaps in the document points to a failure to adequately consider how spills from the pipeline might affect local communities’ access to drinking water, as well as a failure to provide adequate measures to mitigate impacts on 11 endangered animal and plant species that could be affected, including chimpanzees, hippopotamus and the crested crane, Uganda’s national bird.

Further, an independent quality review of the document by the Netherlands Commission for Environmental Assessment, carried out at NEMA’s behest, concluded that "the ESIA report does not yet provide enough information for sound decision making" and overall is “not fit for purpose”.

The Dutch assessment concludes that the ESIA’s technical summary presents positive impacts in a way that is “(far too) rosy”, while “negative impacts are only mentioned in a very superficial and reassuring way” – in short, it is a work of advertising. Meanwhile the ESIA itself makes exaggerated claims about jobs and other economic benefits, seems to ignore significant potential negative impacts on wetlands, and makes unsubstantiated claims of negligible impacts on land ownership, according to the analysis. Further, it points out, the ESIA’s treatment of EACOP’s energy and carbon impacts is unrealistic, insufficient, and ignores the overall impacts of the oil projects of which the pipeline is a part.

As for the ESIA for the Tanzanian portion of the pipeline (roughly 80% of its length), none has yet been published. If EACOP does proceed, Standard Bank and other financiers will be under pressure to show how it complies with the Equator Principles; yet with an ESIA that covers only 20% of the project’s length, and which has been rejected even by the government’s own advisers, the basics are not yet in place.

Signs of corrupt practices and intimidation are already occurring

In our May letter we warned that large-scale land acquisition and displacement associated with the pipeline presented risks of human rights abuses. Regrettably, evidence of abuses and irregularities is already emerging.

News reports have identified a string of problems with the mapping and valuation exercise carried out by NEWPLAN Limited on behalf of Total, including some buildings and plantations going undocumented and others being undervalued. Project-affected peoples report being “harassed and forced to sign different forms without clear explanation” and “told to fill the valuation forms using a pencil, and then sign in ink”, a clear indicator of corrupt practices.

Local groups have also pointed to problems with the land acquisition plan for the pipeline, under which land users who lack title for their land will only be compensated for their crops rather than for the land, which AFIEGO has called “unfair, unconstitutional and against international best practices”.

Climate impacts equivalent to a country the size of Denmark

Alongside its local impacts, the EACOP pipelines’ global impacts are significant, although you would not know it from the project documents. The project will bring an expected 216,000 barrels of heavy, waxy crude oil a day to market, ultimately to be pumped as carbon into our atmosphere. The project ESIA, however, ignores this, considering only “direct impacts” such as the emissions from the pipeline’s construction and heating. No attempt appears to have been made to properly calculate the overall climate impacts of the project, leaving observers to make their own estimates.

Civil society groups have made their own calculations based on the specific fuel density of the EACOP blend. The ESIA indicates the fuel blend to be carried by the pipeline will result in emissions of 3.14 kilograms of CO2 equivalent per kilogram of fuel. With 216,000 barrels of oil a day amounting to 10.9 million metric tons per year, the groups concluded that “indirect emissions of the EACOP project would be at least 34.3 million metric tons of CO2eq emissions per year – 2000 times higher than the operational CO2eq emissions assessed in Section 8.22 of the ESIA.”

This means the annual emissions from EACOP will dwarf the current annual emissions of its two host countries combined, and will in fact be roughly equivalent to the carbon emissions of Denmark (33.5 million tonnes). This at a time when the oil, gas and coal reserves in currently operating fields and mines across the world already far exceed what can be burned if we are to limit the average global temperature rise to below two degrees. Recognition is growing that meeting the goals of the Paris Agreement means ending the expansion of the fossil fuel industry everywhere, and in this context a project which will add the carbon emissions of a small developed country to our atmosphere is irresponsible and dangerous.

Total’s suspension of the pipeline project gives Standard Bank, SMBC and others time to reconsider whether they want to be responsible for facilitating a project that will lead to such massive emissions, as well as posing risks to endangered species and the drinking water and livelihoods of local people. With the Equator Principles now undergoing a high-profile revision, Standard Bank has the responsibility to avoid bringing the standards further into disrepute.

An edited version of this article was published on September 13th, 2019​ in Responsible Investor, here.