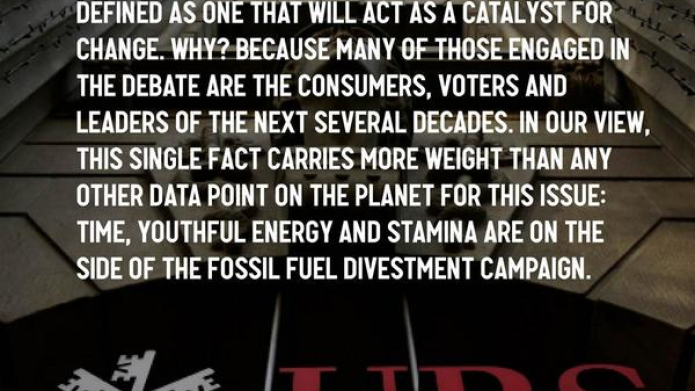 Swiss bank UBS has been making headlines in recent weeks as the latest major international bank to be facing the embarrassment of a legal probe into alleged tax malfeasance. As a formal investigation in Belgium opens into the practices of UBS, the prosecutor’s office in Brussels claimed at the end of February that “UBS is suspected of forming a criminal organization, money laundering and serious tax fraud.”

Far less publicity, however, has surrounded the Swiss bank’s belated catching up with the rush of forward momentum from major banks which announced new coal financing policies in 2015. UBS, currently BankTrack’s number 13 ‘coal bank’ with over €11 billion in financing to the coal sector between 2005 and April 2014, has also, it would appear, started to see the light on coal.

In recent years, UBS has revealed itself to be alive to the growing momentum of the global fossil fuel divestment movement. It has also been leading something of a post-Paris charge with a new global analysis published in January this year warning of the dangers of climate change for the world’s ‘middle class’. Climate change is happening, says UBS, and the middle classes will be worst affected – and, the bank reckons, this major section of the world’s population has the political and purchasing power to do the most about it.

Any expectations of a revolution in the new UBS approach to coal – which covers the bank’s lending and underwriting in the sector but not asset management – are quietly extinguished, however, by just a few innocuous and not very ambitious words.

On coal power, UBS will from now on: “Only support transactions of companies operating coal-fired power plants if they have a strategy to reduce coal exposure or adhere to the strict greenhouse gas emission standards recommended by leading international agencies.”

This is progress from UBS, but it’s unspecific and highly qualified – and is decidedly weaker than recent coal policy revisions announced by European competitors such as ING and Crédit Agricole, both of which concretely exclude some coal companies above a specific threshold.

Nevertheless, for lending to mountaintop removal (MTR) coal mining, there is some progress at UBS. The bank seems to have now gone further than many of its peers by excluding companies “that are involved in mountain top removal operations,” and not only companies which are ‘predominantly’ or ‘significantly’ active in MTR. An important unknown, though, remains: how many MTR companies does this policy concretely exclude?

All told, the new approach from UBS to coal financing is too little – and, if it’s not already too late, then it’s simply not enough now in 2016! Banks need to be trumpeting the details of how they are going to dump coal financing for good.