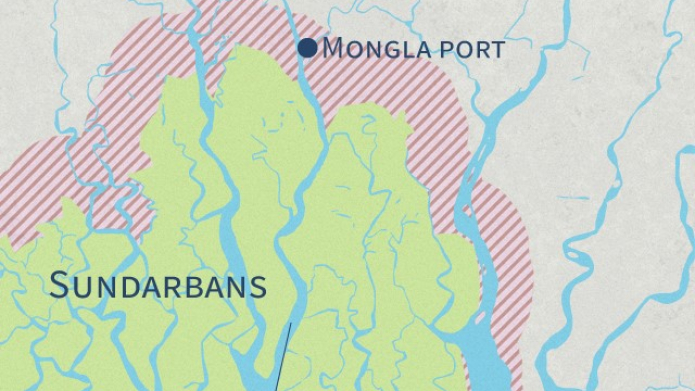 At the Climate 2020 website today, my colleague Ryan Brightwell has been assessing the 'green-ness' of green bonds, an increasingly popular financial instrument intended to be all about generating investment in environmentally sustainable projects. Given their rise to prominence, Ryan describes these bonds as 'the new black in the world of environmental finance', and mentions how the proceeds of one green bond issued by the Export-Import Bank of India are being deployed to develop a railway link vital to the operations of the proposed Rampal coal plant project in Bangladesh. This post digs deeper into Exim Bank's green bond deal – one with very black implications for the world-renowned Sundarbans mangrove forest and its inhabitants.

As India embarks on establishing itself as a regional – and wider – powerhouse, energy is playing a key role. The approach being taken in Delhi, however, doesn’t appear to involve much quibbling about promoting and expanding the country’s renewable energy sector while at the same time digging deeper to eke out further financial dividends from its dirty, outdated coal sector.

A key driver of these ambitions is the state-owned Export-Import Bank of India, the central finance institution promoting cross border trade and investment. Exim Bank receives regular capital infusions from the Indian government, and it also issues bonds on the international market. In fact, its bond issuances are now taking on something of an environmental flavour – jumping into the rapidly developing international ‘green bond’ market, Exim Bank raised USD 500 million in 2015 with its first green bond offering.

The bank intends to issue further green bonds later this year, so it’s worth looking more closely at this green financing, particularly given its relevance to Exim Bank’s involvement in one of the most controversial energy projects shaping up currently in the subcontinent – the Rampal coal power plant in Bangladesh.

Exim Bank has been extending considerable loan sums to many recipients in recent years, including its smaller eastern neighbour Bangladesh. A loan of USD 1 billion for infrastructure development was provided in 2010, with a follow-up for the same amount in 2014 – and, in 2016, this lending largesse doubled to USD 2 billion for the financing of various social and infrastructure development projects. One such project falling under this latter umbrella loan is a 64.75 kilometre railway line connecting the Mongla Port in the Sundarbans mangrove forest to the town of Khulna.

Before we get into the specifics of this seemingly innocuous rail link project, some context.

Exim Bank is this year considering a great big USD 1.6 billion addition to its portfolio in the shape of a buyer’s credit for the Bangladeshi-Indian joint venture leading the construction of the proposed 1320 megawatt Rampal coal-fired power plant. The plant’s location is currently a mere four kilometres from the ecologically critical area surrounding the Sundarbans, the world’s largest mangrove forest.

A UNESCO World Heritage site and protected under the Ramsar Convention as a ‘wetland of international importance’, the Sundarbans is home to Bengal tigers and is a source of livelihood for millions. It also acts as a vital natural defence for low-lying Bangladesh from storms and the tidal surge generated from the cyclonic depression in the Bay of Bengal.

In short, the Sundarbans is an incredible natural wonder and resource that does not need a large coal plant on its doorstep, and thus the plan to build the Rampal plant has stirred major opposition nationally as well as internationally. In the face of this, the project promoters are now unleashing a torrent of dubious PR spin – incredibly, the baseline assertion now is that “Rampal Power Plant will not damage rather it will preserve the Sundarbans.”

So what of the Mongla Port-Khulna rail link? For one thing, while the source of coal to feed the plant has not yet been agreed (increasing speculation has it that it could well be coming from India), there is no getting around the fact that coal supplies for Rampal will have to be shipped through the sensitive rivers of the Sundarbans, arriving at the port of Mongla.

Following tough negotiations last year with Bangladesh’s rail authorities, a 21.11 kilometre rail link is being added to the Mongla-Khulna line in order to supply coal to the Rampal plant site directly. And this is the kicker: the Mongla-Khulna railway construction appears under the auditor's certification of Exim Bank's first green bond issuance. Making use of a green bond’s proceeds – USD 580,000 has been earmarked specifically for the railway project – to finance strategic coal infrastructure in this way is completely inappropriate.

This is not the type of project that springs to mind when one thinks of ‘green bonds’. According to the Green Bond Principles, green bonds are designed to “finance new and existing projects with environmental benefits”, yet this railway line is a strategic part of the infrastructure for a coal plant that has the potential to inflict deeply damaging impacts on a globally prized ecosystem.

In spite of these principles, disagreements abound within the global financial sector and beyond about their stringency. There is scope unfortunately for environmentally egregious investments to be funded by green bonds – see, for example, the case of a GDF Suez green bond raising funds for a controversial large dam project in the Amazon, and the latest Chinese green bonds that could finance ‘clean coal’. Exim Bank’s green bond financing of the Rampal rail link threatens to be a similarly questionable ‘green’ investment.

Should Exim Bank go ahead this year and provide the entire USD 1.6 billion loan for Rampal, the bank’s head for one has already recognised that this is bound to result in reputational risks. Yet even as its credit ratings have been coming under pressure, the bank has seen fit to deploy part of its first green bond proceeds to finance vital infrastructure for a highly contentious coal plant.

While many other finance institutions are showing progress when it comes to responsible investing, this green bond sleight of hand sets a regrettable precedent for any upcoming ‘green financing’ from Exim Bank. The bank’s approach with the rail link – seemingly compelled by Rampal project tactics – will further impact its credibility and may bring consequences for its future fundraising capacity.

This misuse of a green bond is a further reason to demand that Exim Bank of India abandons its financing plans for the Rampal coal plant. You can add your voice to a growing international call aimed at the bank, either as an organisation or as an individual.