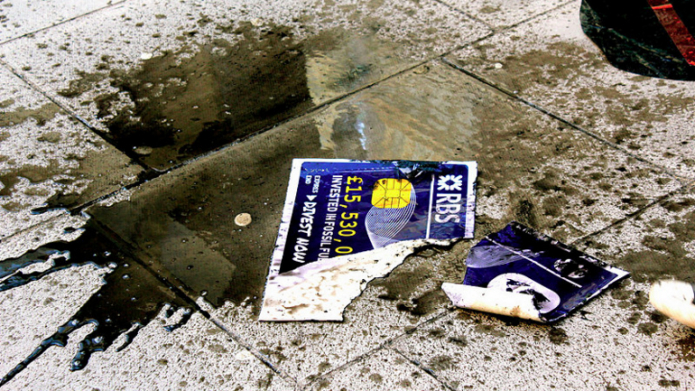 Campaigners celebrated a momentous announcement yesterday, when RBS revealed that it has ditched a whopping 70% of its fossil fuel investments in the last year alone, whilst doubling funding for renewable energy, to £1 billion. RBS claims that this makes it ‘the largest lender to the UK renewable energy sector’.

This is quite some turnaround from the bank formerly known as ‘the oil and gas bank’, which was found to be the fourth most invested UK bank in fossil fuels in our Divest! campaign, with £14.4 billion in fossil fuel extraction in 2012 alone. For many campaigners who have worked tirelessly to get RBS out of fossil fuels, such as Global Justice Now, Friends of the Earth Scotland, the Robin Hood Tax, People & Planet, Fossil Free UK, Platform and so many others, this was a moment to celebrate.

But should campaigners really be hailing this as such a win? On closer inspection, all is not as it seems with the RBS fossil fuels divestment. Worse still, this story could represent one of the biggest pieces of greenwashing in corporate history.

Firstly, RBS have not actually wound down 70% of their fossil fuel lending, they’ve merely shifted it on to someone else – in this case, Japanese bank Mizuho, who bought more than $36 billion worth of loans, including all of RBS’ tar sands and American fracking interests. In other words, the amount of fossil fuel financing in the world has not decreased one penny from this policy change, it’s merely been shifted on to someone else’s books. Out of sight, out of mind, they say.

Secondly, it’s very clear that RBS have not chosen to do this for genuinely green or altruistic reasons. After the 2008 crisis RBS became basically insolvent, whilst its market value completely crashed. Since then, the bank’s share price has never recovered, it has made the largest losses in British corporate history, and it has also landed in the record books for being the company that has produced losses for the most number of years consecutively. Retrenching from the bloatedness and largesse of the past, RBS has been very public about wanting to withdraw from overseas markets, and to “refocus” on it’s UK business..

In other words, the bank got its fingers burned really, really badly, and now it’s pulling its hands out of the fire of being an international investment bank. RBS is desperately trying to claw back some residual value from the corpse of what was once the world’s second largest bank, and it’s doing this by flogging off anything and everything that it still can. Whilst we should be pleased that the bank is deleveraging, and in doing so is reducing the risk of another crisis and consequent taxpayer bail-out, this hardly constitutes coherent, considered and deliberate climate policy.

And thirdly, even when you take RBS’ statements at face value, they’re not even that impressive. Fossil fuel companies still receive more than six times as much funding in loans than renewables, which itself accounts for only 0.1% of the banks assets, and 0.3% of the banks total loans to customers. That’s hardly a green and just transition. To call this a drop in the ocean would be a gross exaggeration.

What’s more, these lending figures are purely on loans alone, and do not include investments, equities, bonds, or other types of financial services provided to fossil fuel companies, such as transactional and day-to-day banking services. Underwriting, for example, was worth a further $4 billion to RBS in 2014 – almost doubling its exposure to fossil fuels – but you wouldn’t know it from RBS’ press release.

Other commitments wilt under closer inspection too. The bank has committed to ‘not provide funding to undiversified thermal coal mining companies’, a commitment that is almost worthless given that the biggest polluters – such as Anglo American, BHP Billiton and Glencore – are highly diversified.

These three companies alone have received more than $3 billion in corporate loans from RBS since 2004, yet they will be entirely unaffected by RBS’ new policy direction. Likewise, the commitment to ‘not finance any new tar sands projects’ is similarly misleading, because tar sands projects are overwhelmingly financed through operational funding rather than project finance, unlike coal.

In portraying itself as taking a “great green turn”, RBS is simply spinning a marketing advantage out of a business decision has been taken to shrink and retrench its operations – a decision that is based not on altruism or environmental protectionism, but purely on the fact that RBS is suffering for the criminal misdeeds and woeful financial management of the past and present management.

To celebrate this “win”, then, is highly disingenuous, and falls victim to RBS’ clever but ultimately manipulative greenwashing attempt at spin. It’s like congratulating someone on environmental grounds for flogging off a gas guzzling Chelsea tractor, when the reason they are doing so is because they have been busted for international drugs trafficking, and are being forced to sell off their assets and the proceeds of their crime.

If RBS wants to be taken seriously as an environmental and sustainable bank, then it should divest completely from fossil fuels, and should wield its sizeable asset pool to lend sustainably and in the public interest – as 82% of us agree it should.

Instead, the bank is cynically spinning a corporate imperative to shrink its business, which itself is the result of the banks hubris, mismanagement, and dangerous lack of sustainability.

As such RBS bank is less a climate leader, and more a wolf in sheep’s clothing when it comes to fossil fuel financing and climate change. Campaigners ought to be wary when celebrating such a win.