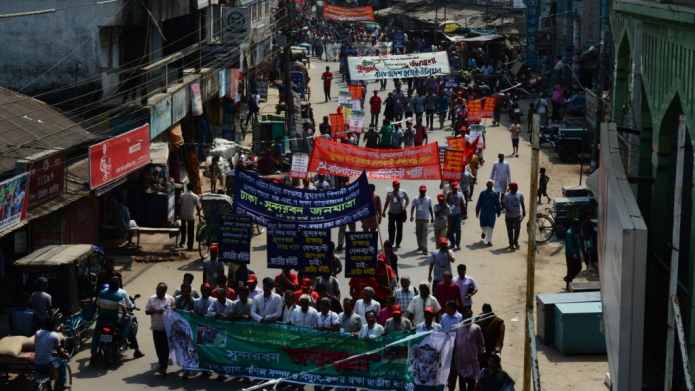 Last weekend, over a thousand Bangladeshis and Indians gathered in Dhaka, Bangladesh, to take part in a four day, 250 kilometre ‘Long March’ to voice a clear message: Save the Sundarbans, the world’s largest mangrove forest.

The Bangladeshi and Indian governments are currently intent on building a coal-fired power plant in the Rampal region 14 kilometres northwest of the Sundarbans, widely known as ‘the lungs of Bangladesh’, and only four kilometres from the designated ecological boundary of the sprawling forest, a World Heritage site and a Ramsar protected wetland.

Participants shouted the slogan “Long March! Long March!” – an echo of the documentary Long Live Sundarbans which captured the first Sundarbans Long March in 2013. Since then plans for the proposed 1320 megawatt Rampal coal power plant have advanced, with a construction site already up and running. Joined by a solidarity group of Indian activists, Bangladeshis set off from the capital Dhaka, holding rallies along the way before reaching Khulna, where the Rampal plant site is located. The Long March has received extensive public attention, including internationally: among others, Al Jazeera and The Guardian covered the protest.

If the construction of the Rampal coal-fired power plant goes ahead, the Sundarbans and all life depending on it will come under threat.

In total 500,000 people depend on the complex and fragile Sundarbans ecosystem for their livelihood, reliant as they are on agriculture, shrimp cultivation and fishing among other activities. However, some time before any environmental impact assessment (EIA) for the project was conducted, the authorities cleared the site for the coal plant by forcefully displacing some of the region’s inhabitants.

Other than the benefits it provides to inhabitants, the mangrove forest also shields low-lying Bangladesh and its population from frequent cyclones, storms and tsunamis. In a country that is widely acknowledged to be one of the most vulnerable to climate change, many observers are now asking: why is Bangladesh so intent on developing coal-fired power – there are at least a dozen coal plant projects currently being planned across the country – in the knowledge that coal is the single greatest source of man-made carbon emissions, which will in turn increase the frequency and intensity of natural disasters?

And, of course, the Sundarbans mangroves also host unique flora, a variety of fauna and complex waterway systems as well as being home to hundreds of bird and fish species, crocodiles, the most endangered freshwater turtles, the rare Irrawaddy and Gangetic dolphins and a shrinking number of iconic Bengal tigers, of which only around a hundred are thought to survive in the area. All of these will be permanently impacted if the Rampal plant ever becomes operational.

Moreover, imported coal would have to be shipped via the Sundarbans. At an anchorage point inside the forest, coal would be transferred from the main ship to smaller coal vessels that would make their way up the rivers through dolphin sanctuaries to reach the proposed coal terminal.

Recently, over the course of less than a year and in separate incidents, three vessels carrying oil, fertilizer and coal capsized spreading toxic spills in the rivers of the Sundarbans. Many have opined that these mini-catastrophes are merely a prelude to future Rampal-related accidents ahead. Even if accidents can be minimised, the constant flow of hot water and toxic waste that the plant would dump into the river cannot be eliminated. The same goes for the ash that the coal plant would emit – it will affect all lives in the Sundarbans. For a detailed explanation of the inevitable consequences of a project such as Rampal, see: How the Rampal Coal Power plant will destroy the Sundarbans.

One of the many fishermen whose livelihood depend on the Sundarbans mangrove forest and its rivers (Photo: Joe Athialy, Bank Information Center)

January this year saw an important project development with the selection of Indian state-owned Bharat Heavy Electricals Limited (BHEL) as the operating party. BHEL is now expected to seek the remaining debt of 70 percent from the Export-Import Bank of India, the Indian export credit agency. The financial closure, meaning the completion of project-related financial transactions, is planned for July 2016.

To date, the Norwegian Pension Fund has, on ethical grounds, divested from NTPC because of the Rampal project. Three of France’s top banks – BNP Paribas, Crédit Agricole and Société Générale – also disclosed last year that they will not invest in the project because of its likely environmental and social impacts.

The rising tide of Rampal opposition

The National Committee to Save the Sundarbans (NCSS) is a coalition set up to oppose the construction of the Rampal coal power plant. One of the coalition’s main concerns centres on the incomplete EIA, in what Professor Anu Muhammad describes as a "project of deception and mass destruction". Professor Muhammad points out that “No sensible person will deny that there are many alternative ways for electricity generation, but there is no alternative for Sundarbans.”

The coalition’s current number one demand is that a neutral UN-led impact assessment study be carried out in the Sundarbans. A UNESCO delegation plans to visit Bangladesh by the end of this month in order to assess the environmental impacts of the Rampal plant.

In addition to the Rampal project, a local firm – Orion Group – is also planning a 566MW plant in the same area. If they proceed, it is inevitable that the Rampal and Orion projects will bring destruction and pollution to the world’s largest mangrove forest, its ecosystem and its inhabitants. In BankTrack’s view, all national and international banks should refuse to finance these projects and rule out support of any kind for them.

With this latest successful Long March, Bangladeshi civil society has once again sent a clear message to any company or financier considering involvement in the Rampal project. This pressure will only intensify on potential financiers in coming months, starting with the Export-Import Bank of India.