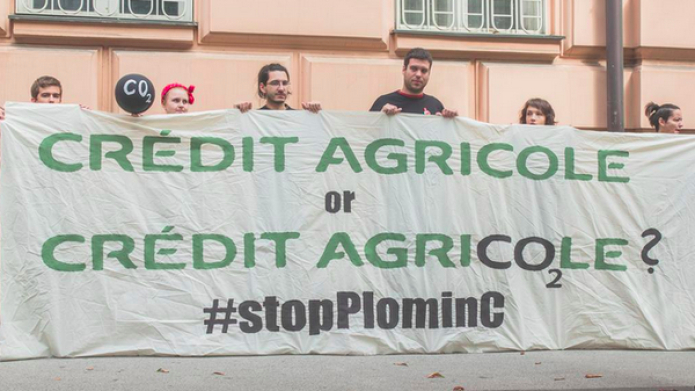 Big congratulations to Zelena akcija/Friends of the Earth Croatia following yesterday’s news that the long-proposed 500 MW Plomin C coal plant project in the Istrian peninsula is dead in the water.

Zelena akcija has been fighting the Plomin C project plans for five years. Over the last couple of years BankTrack has also campaigned on this ‘dodgy deal’, in tandem with CEE Bankwatch Network and Friends of the Earth France, owing to Crédit Agricole’s advisory role in the controversial €800 million investment and its expected potential key role in the eventual project financing.

An upgrade to the French bank’s coal power financing policy ruled it out of further Plomin C involvement last year – not before groups had published a report pointing out that the bank’s support for the project was inconsistent with its ‘climate ambitions’ and its own sector policy on coal-fired power plants. Activists further delivered the message to the bank in Zagreb and Paris!

The welcome development came yesterday direct from Croatia's Minister for Economy, Tomislav Panenić, confirming – according to Bankwatch – “months of media reports that the European Commission considers the project to involve incompatible state aid due to the involvement of the heavily politicised state electricity company HEP”. Panenić also referred to low electricity prices which would make the troubled project uneconomic.

While the European Commission’s Directorate General for Competition’s ruling on state aid in the case has yet to be seen and scrutinised, concerns remain that political manoeuvrings in Croatia could still result in desperate efforts to resuscitate what does now seem to be a doomed coal project. Old coal dogs don’t give up quietly.

Nonetheless, a major, highly necessary victory for the climate and people living in the idyllic Istrian peninsula. “Plomin C has proven to be a major distraction,” said Bernard Ivčić from Zelena akcija, “and we now need to make up for lost time and ensure that Croatia develops a new energy strategy based on energy efficiency and sustainable renewables.”

As Pippa Gallop points out, the victory sees another big coal project domino falling: “Plomin C is the latest in a whole series of coal projects being cancelled across Europe and beyond as renewables become more and more affordable. Governments across the Balkans who are largely ignoring this trend need to start paying attention if they are to avoid being left with a series of expensive mistakes on their hands.”

For coal banks, too, the Plomin C collapse should be another salutary lesson that economic and climate developments, allied with concerted, coordinated campaigning, are now eclipsing the old business model.

Rather than being tempted into the next coal power proposal that crosses their table (and no doubt Crédit Agricole has picked up – or is desperately trying to pick up – a juicy fee for its Plomin C advisory role), banks are going to have to start reading the writing on the wall, rather than reading off the limp coal excuse sheets which they cling on to in order to justify their irresponsible yet enduring engagement with this sector.

As with Croatia and its huge clean energy potential, so it goes in many other parts of the world where coal projects continue to be proposed in the expectation of international financial support, including from all the western banking big boys (including Crédit Agricole again with the TJB2 coal project in Indonesia). The banks need to stop wasting their own and everyone else’s time on coal, and focus solely now on the clean stuff. The time for giving economic refuge and encouragement to big coal’s stuttering, barely credible development plans is over.