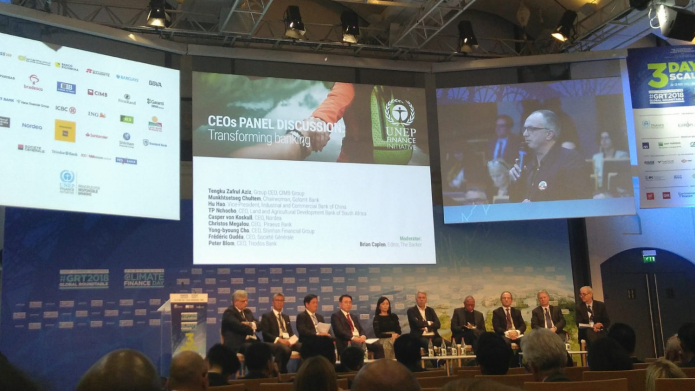 This month, as dangerous heatwaves broke temperature records across Europe, the final version of UNEP-FI's Principles for Responsible Banking was published. After eight months of consultation involving 500 stakeholders, the final version of the six principles was almost exactly the same as the original - with just 24 words rearranged.

The Principles, endorsed by 71 banks to date, commit banks to align their business strategies with the Sustainable Development Goals and the Paris Climate Agreement. Banks can formulate their own goals on how to achieve this alignment, and have as four full years before they need to deliver on them. Meanwhile, they are apparently at liberty to continue financing new fossil fuel infrastructure while they reap the PR benefits of signing the Principles.

Given that the world finds itself in a unprecedented climate crisis that demands an immediate response from everyone, not least from banks, this generous implementation period is of great concern to us. As part of the consultation process, we, together with 44 other organisations urged the banks to instead set a process where goal-setting was put first. This suggestion was rejected, with the website of the PRBs claiming that "the current structure of the Principles – allowing banks to join at any starting point – is the most effective way to drive change and impact and with that ultimately a greater contribution to our sustainable future."

We also claimed that for banks to align their business operations with the Paris Climate Agreement, they must stop financing new fossil fuel infrastructure. However, the PRB banks disagree, writing that " banks commit to align with the objectives set out in the Paris Climate Agreement. This means that through their financing activities, products and services, and client relationships banks should effectively support the development of an infrastructure and economy in line with a well-below 2-degree pathway. This pathway looks different for different countries and banks are required to implement the Principles in line with their country-context."

The pathway may look different for different countries, but there is one respect in which it looks the same everywhere: new fossil fuel infrastructure is fundamentally incompatible with reaching the goal of limiting global temeperature rise to below 1.5 degree goal. A new peer-reviewed paper in the journal Nature confirmed as much just this month - indeed, not only should we stop constructing new fossil fuel infrastructure anywhere, but also some fossil fuel infrastructure needs to be retired early. The European Investment Bank has just last week shown that it is alert to the climate emergency with the publication of draft policy proposals that should see the EU's public bank ending its financing of new fossil fuel projects by 2020. Principles for Responsible Banking which still permit new finance for new fossil fuels are simply not aptly named.

That said, the PRBs are what they are, and will be officially launched on September 22nd in New York  at the UN Climate Summit. Our attention has now shifted to ensuring that all PRB banks will deliver on what they promise, right from day one.  With this in mind, BankTrack has written to 59 founding and early endorsing banks to ask them what concrete plans and arrangements they have  put in place to make sure they hit the ground running on September 22, including their plans to end finance for new fossil fuels. We'll let you know what we learn.