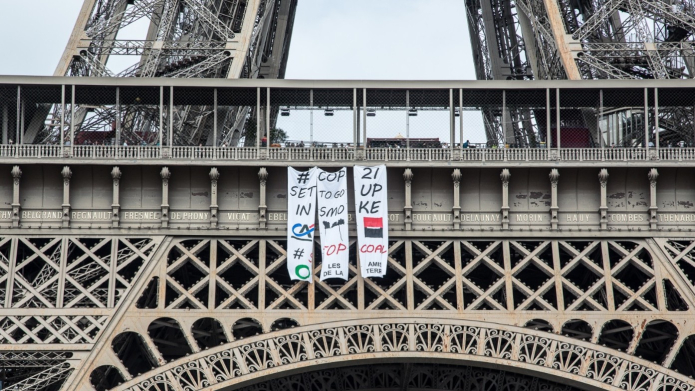 With November’s COP 22 meeting in Marrakech fast approaching, the commitments made by French banks in 2015 à propos their financing of the coal sector are being seen for what they are: highly mixed. For one thing, Natixis confirmed, in its first such publicly declared sectoral policy, that it is ending project financing for all new coal plants – worldwide. Yet, in an indication of gaping flaws in their climate commitments adopted just before COP 21 in Paris last year, Crédit Agricole and Société Générale are involving themselves in several coal power projects, most notably in Indonesia.

Friends of the Earth France and BankTrack believe that Crédit Agricole and Société Générale must immediately withdraw from projects which are inconsistent with the Paris Agreement, and they must also, along with BNP Paribas, face up to and engage in forthcoming climate events by bringing a definitive end to all of their financing for coal projects.

In 2015, all of the major French banks agreed to reduce their support to the coal sector in an apparent indication of their willingness to contribute to the fight against climate change. Friends of the Earth France and BankTrack welcomed these first steps towards stopping financing for dirty energy, but equally we pointed out the limitations of the steps taken.

One such limitation concerns project financing. Although relatively minor when compared to the banks’ general financial and business services to coal companies, which will be discussed in a future article, nonetheless participation in project finance remains a clear and solid indicator of the links between French banks and the most climate-destructive sector.

This direct financing of projects is the most obviously verifiable investment activity undertaken by banks, and the provision of support in this way for any new coal plant is clearly inconsistent with the 2°C 'maximum’ global warming target – it should, by now, go without saying that French banks need to start automatically excluding any new coal plant from their provision of direct financing, regardless of their commitments to renewables and other similarly positive announcements..

Yet we are still a long way from this first necessary step. While France’s top financiers of coal, BNP Paribas, Crédit Agricole and Société Générale, have duly pledged to stop funding all global coal mine projects, it is only coal power projects in rich, developed countries which are currently automatically excluded from receiving their support. And some important perspective is required here: rich countries account for only between 4.1% and 6.5% of all coal-fired projects planned since 2010. Thus the vast majority of new coal plant projects remain in line for financial support from the French banks, provided, that they meet certain additional criteria.

Greenpeace Indonesia activists unfurl a banner from cranes during their blocking of coal loading at the Cirebon coal power plant in West Java, Indonesia, May 15, 2016.

In project finance terms, then, the three French banks have made similar commitments. However, while the bank-imposed transparency restrictions continue to undermine total certainty, it seems that the commitments in question are being applied differently.

A prime example dates from January this year, when Friends of the Earth France and BankTrack learned that Crédit Agricole and Société Générale had joined a group of banks looking to finance the proposed expansion of the Tanjung Jati B coal plant in Indonesia, this following the withdrawal of BNP Paribas.

This revelation was only the beginning. We subsequently got wind of Crédit Agricole receiving a mandate in January 2016, along with four other banks, to finance another coal power extension project in Indonesia: Cirebon 2. As with TJB2, nothing yet has been signed off for this investment, and Crédit Agricole may still choose to distance itself from the other banks and withdraw from these two projects.

However, its very interest and involvement in these projects up to now is inconsistent with the 2°C target and constitutes a serious black mark against its commitment to do everything in order that the objectives of the Paris Agreement are met or exceeded, as it purported to be doing with its signing of the Paris Pledge for Action.

Those tempted to believe that the new coal policies of the French banks would, in spite of their limitations, be enough to deter their banking teams from engaging in new coal projects should remove their blinkers – coal continues to expand in south-east Asia, and thus to stop financing new coal plants merely in rich countries, where such projects are rapidly drying up, is equivalent to no change at all.

Essential for the survival of millions of people, bringing an end to the financing of new coal power projects is very much possible. Indeed this is one of the central points of Natixis’s policy covering the coal industry. Published in July 2016, nine months after this French bank committed to reduce its support for coal, this first and only sectoral policy to be publicly issued by Natixis comes four years after the appearance of related policies from the other French banks – but goes beyond them by far.

While the other banks are content to impose new criteria to accompany their continued financing of new coal power projects, criteria which reflect market developments, Natixis has grasped that only a complete cessation of support to all coal power projects around the world is in line with, and respectful of, the Paris Agreement. Unencumbered by coal, such a move will better allow the bank to play an important role in the global energy transition.

Of note too, and unlike its peers, Natixis is plainly acknowledging that coal is an energy source in decline, and is not trying to hide behind statistics and arguments to defend questionable support for unjustifiable projects.

Because in the cases of TJB2 and Cirebon 2, it’s difficult to avoid the conclusion that Crédit Agricole is in no way motivated by the welfare of the Indonesian population, but instead is cynically prioritising relationships with its Japanese customers ahead of the climate emergency: think of the proposed – but now ditched – Plomin C coal-fired plant in Croatia which Crédit Agricole was involved in last year and featured Marubeni, which alongside Sumitomo comprise the two Japanese companies involved in TJB2 and Cirebon.

Unlike last year, French banks will have difficulty demonstrating their commitment to the fight against climate change unless they quickly patch up the flaws inherent to the steps they adopted in 2015, including those relating to their project finance for new coal plants in developing countries. Because, like last year, they will be judged on their support for coal and equally that will be the basis for conclusions about their efforts to address global warming.

While Friends of the Earth France and BankTrack call on Crédit Agricole and Société Générale to immediately withdraw from the TJB2 and Cirebon 2 projects, at the same time all French banks – including BNP Paribas – must also announce at ‘Climate Week’, to be held in New York later this month (19-25 September), that they are ending all project finance for all coal plants around the world –  without exception.