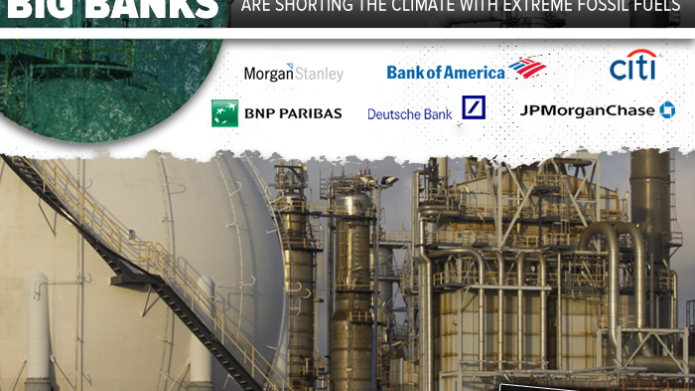 Published earlier this week by BankTrack, Rainforest Action Network, the Sierra Club and Oil Change International, the Fossil Fuel Finance Report Card 2016 – entitled ‘Shorting the Climate’ – has already been making waves. Thanks to Naomi Klein, Bill McKibben and many others for pushing #shortingtheclimate out there on social media: it’s vital that the call goes out widely to the global banking sector urging an end to its multi-billion dollar support for fossil fuels.

The scope of the report card has been extended beyond the ‘coal only’ focus of previous years, principally because of last year’s Paris Agreement. While countries are making commitments post-Paris, the financial sector continues to finance risky, environmentally destructive sectors of the fossil fuel industry – across the board. As my colleague Yann, BankTrack’s Climate and Energy Campaign Coordinator and one of the report’s contributors, notes: “None of these banks can claim to support the Paris Agreement, to be aligned with a two degrees scenario or to be fighting climate change – as we too often read in their sustainability reports – if they continue to finance these destructive sectors.”

Over at Climate Home, meanwhile, the Report Card’s findings were filtered through the Green Climate Fund (GCF) prism. If the banks’ sustainability reporting double standards are not enough, HSBC and Deutsche Bank (again) have been recently accepted as GCF partners, amidst heavy criticism from NGOs, in order to “help finance and advise on transformative green energy and climate resilience projects in developing countries.” With $7 billion from Deutsche Bank and $4 billion from HSBC going to coal miners alone between 2013 and 2015, it’s little wonder that, without some major – and rapid – commitments to get out of fossil fuel financing, the GCF role of these institutions continues to attract widespread scepticism.

Of course, this year’s additional coverage of financing for LNG export infrastructure and for ‘extreme oil’ (Arctic oil, tar sands and ultra-deepwater oil) gives some additional context for the banks’ continuing support for the coal industry. If, comparatively, the coal numbers are put in the shade somewhat by the LNG and extreme oil numbers, it’s a shade that creates little comfort.

Close to $200 billion in financing from just 25 banks over two years for companies active in coal mining and power is still colossal. The key question now is whether the still very patchy, but gradually improving coal policy coverage (see page 16 of the report for the coal mining policy grades; page 24 for the coal power policy grades) now taking place at these banks is going to start making deep inroads into this vast life support for a dying industry  – and, most importantly, how quickly.

Of the various case studies compiled for the report card, two stick out for the coal sector, and are indicative of the challenges and concerns that persist in terms of the banking sector’s apparent unwillingness to show desperately required ambition on coal, particularly in the developing world.

First, the Rampal coal plant project in Bangladesh, which threatens the Sundarbans mangrove forest, a UNESCO World Heritage site and home to thousands of people and endangered species. One of the project’s key players is India’s National Thermal Power Corporation (NTPC) which, as the report card details, is no stranger to environmental and other scandals. The underwriting of NTPC’s loans and bonds has been carried out by Indian, western and Japanese banks including BNP Paribas, HSBC, KfW, Barclays, Citigroup, Deutsche Bank, Sumitomo Mitsui, and Mizuho.

The Rampal project is another reminder that bank involvement in climate threatening dodgy deals is not limited to direct project finance. Big coal company players such as NTPC are heavily reliant on bond and share issues in which banks are not shy about involving themselves – and the same applies to the buying of bonds from the Export-Import Bank of India, now the key target institution in the frame for the provision of the $1.6 billion credit that would allow the Rampal plant to start firing next to the Sundarbans.

Second, and perhaps even more worryingly, is the last gasp coal revolution – or apocalypse, as we tend to think of it – currently being attempted in Indonesia.

Indonesia’s coal industry is threatened by the global slump in coal demand. Thus the Indonesian government is striving to secure a market for the nation’s coal and has announced a build-out of 119 new coal-fired power plants, with a capacity of 45GW.

One particularly controversial project in all of this is the Batang coal-fired power plant, which has been fiercely protested by locals and infringes on a marine protected area. The Japanese Bank for International Cooperation, as well as other Japanese and Singapore commercial banks, decided just last month to finance this enormous coal plant. Similarly contentious is the TJB2 coal plant project, which Crédit Agricole and Société Générale are considering financing.

As reflected in their ‘C’ grades for coal power, these latter two French banks are making progress and tightening up their coal financing policies. Yet, as the situation in Indonesia (and elsewhere – see what Société Générale, ING, Deutsche Bank, Santander and UniCredit are up to in the Dominican Republic with another highly problematic coal plant project) illustrates, it is astonishing, post-Paris, that they are still prepared to sanction such unnecessary investments in far away places. The limits to their policy moves couldn’t be more glaring.

The 2016 Report Card is not shy of noting and acknowledging some of the progress being made by major banks on coal investing. However, the finance numbers continue to speak for themselves, and the case study conveyor belt of potentially disastrous, bank-backed investments continues to grind on. The global commitment and direction of travel was laid out six months ago in the Paris Agreement. We hope this year’s report card is a wake-up call to banks which appear to be resting on their laurels after doing some late night cramming last year for their climate entrance exam in Paris.

Some may have scraped a pass, but they now need to get out into the world and do the work. And those ‘job offers’ still rolling in from the coal industry? Now, more than ever, just say ‘No’.