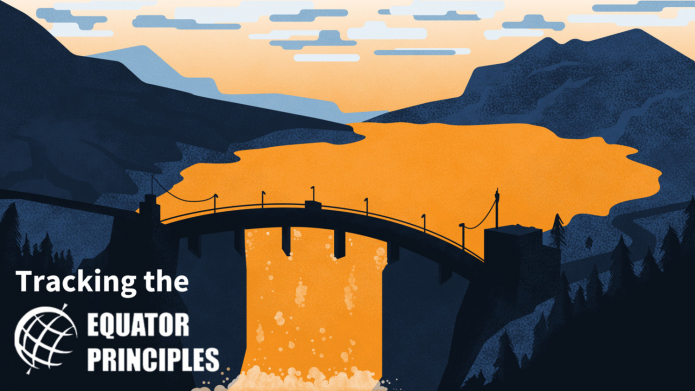 It was all supposed to be more than just a date in the calendar, perhaps a lavish ceremony in New York or London, but Covid-19 spoiled all that. Today's launch of the fourth iteration of the Equator Principles is a bit of a non-event. Yet it marks the end of a three-year process in which 110 banks discussed and finally agreed upon a new set of principles that will govern under what conditions they will finance large infrastructure projects in the years to come.

This revision process of this set of principles, already in existence since 2003, was not a given. Were it not for the sustained pressure of the ‘Equator Banks, Act!’ campaign, organised by a coalition of civil society groups and Indigenous organisations around the world led by BankTrack, who had passionately advocated for such a revision, it may never have taken place.

The campaign, launched in 2016 following the financing by 14 Equator banks of the construction of the Dakota Access Pipeline (DAPL) aimed at achieving a major overhaul of the EPs, to stop Equator finance for new fossil fuel projects and protect Indigenous Peoples’ rights. It cited DAPL as the most notorious example of such a ‘fully Equator compliant’ project that nevertheless turned out disastrous for indigenous communities as well as the banks involved. This was all to be agreed upon at the 2017 EPA annual meeting in Brazil and while that did not work, the meeting did agree to revise the principles, which has now led to EP4.

To put it straight EP4, much to the disappointment of the Equator Banks Act campaign, fails to address climate change and Indigenous rights adequately. Although EP4 states that banks ‘support the objectives’ of the Paris climate agreement, it does not include a single requirement that would exclude finance for fossil fuel extraction projects that directly endanger the Paris goals, meaning Equator banks can continue to finance ‘Equator compliant’ coal power plants, oil pipelines, LNG terminals and oil drills in the Arctic.

In addition, EP4 falls short of a clear commitment to uphold Indigenous peoples’ rights, including their right to grant or withhold consent for projects situated on Indigenous land and territories (known as Free, Prior and Informed Consent or FPIC). Instead, in ‘designated countries’ like the United States, the new principles only require the consultation process with Indigenous Peoples to be ‘evaluated’ by an independent consultant. There is no explicit commitment to respect FPIC in all circumstances, meaning the principles are unlikely to prevent Equator banks from financing another situation just like DAPL.

In fact, given how long it took to develop them, the new principles still closely resemble the old ones, with only a few gradual improvements here and there. For example, the ‘deemed in compliance’ language under Principle 3 has been removed, meaning that EP projects in designated countries may be required to satisfy all EP standards, even where they exceed requirements of local law. Also, small improvements to EPFI reporting requirements have been included in EP4, such as encouraging project name reporting for Project-Related Corporate Loans and a new provision which seeks to promote consistency in project name reporting where client consent is obtained. However, these are small and rather weak changes - projects located in designated countries can still rely on local law even where this doesn’t reflect the highest standard of social and environmental review, and projects can still be financed under the principles entirely in secret where the client requests it. It is certainly not the overhaul we had in mind.

These new principles come into effect today, October 1st 2020, but there’s still a long way to go until the EPs will truly reflect an effective social and environmental risk management framework that works for financial institutions, affected communities and the planet alike. It will take a while before banks, exhausted by this long revision process, will contemplate drafting EP5, but we will continue to pressure Equator banks to meaningfully deliver on their commitments to respect human rights, support the objectives of the Paris Climate Agreement and to support conservation. Here is what we want to see changed:

Better implementation on the ground

Projects financed under Equator are supposed to ensure a number of things happen on the ground. For example, Principle 5 requires an ongoing process of effective stakeholder engagement with affected communities and other stakeholders. This means fully-fledged consultation meetings, robust social action plans and, where the project affects Indigenous Peoples, securing FPIC. Under Principle 6, they require the most risky projects to establish a project-level grievance mechanism, designed to receive and facilitate the resolution of concerns and grievances about the project’s environmental and social performance. These are both incredibly important processes which ensure that stakeholders get a decisive say in the project’s which affect them.

Unfortunately, BankTrack’s recent research into these processes - “Trust us, we’re Equator Banks” - showed disappointedly low compliance with these principles. It found that the existence of a stakeholder engagement process or project-level complaints mechanisms cannot be evidenced in 24 out of 37 projects where these would be required (65%). In 16 cases (43%), neither a stakeholder engagement process nor a project-level complaints mechanism could be found. The projects analysed are focused in high-risk sectors such as oil, gas, hydropower and mining.

The research represents the first systematic evaluation of whether project sponsors indeed comply with the  Equator Principles and the results call into question the extent to which the Equator banks insist the principles are actually being adhered to on the ground. Following this research, we are calling upon the EPA to ensure that compliance with the EPs does not need to be taken on trust, and rather to ensure a Compliance Report is made publicly available by financing banks, setting out how each of the ten principles has been implemented for each project financed under the Principles.

Projects financed under Equator are also supposed to ensure that the rights and interests of project-affected communities and other stakeholders, including workers, are ensured. This is why we continue to call for an initiative-level accountability mechanism to be developed by the Equator Principles Association (EPA). Grievance mechanisms offer a means of access to remedy for people who are negatively impacted by such projects financed under the EPs, such as labour violations, displacement, or destruction of sources of livelihood. Access to remedy is essential as it can mitigate the harm suffered and deter future violations.

Although EP4 requires the establishment by project sponsors of project-level grievance mechanisms for high-risk projects financed by EPFIs, there are currently no means by which project-affected people or their legitimate representatives can raise instances of alleged non-compliance by the EPFIs with the Equator Principles. EP4 references banks’ responsibility to respect human rights under the UN Guiding Principles (UNGPs), but the UNGPs explicitly call for industry standards, like the EPs, to operate accountability mechanisms so that communities can raise complaints when the standards are not met. Therefore, the Equator banks themselves are failing to fulfil the requirements of the UNGPs to respect human rights in this way. The low level of apparent compliance with the EPs shown by BankTrack’s aforementioned research adds strength to the argument for an initiative-level mechanism. We continue to monitor the effectiveness of project-level grievance mechanisms whilst also advocating for the introduction of an initiative-level mechanism.

Same rules and commitments in every country

The arbitrary nature of this distinction has been particularly highlighted by the COVID-19 pandemic which has resulted in many host countries relaxing their regulatory regimes for social and environmental review. For example, in the United States an Executive Order was issued by the President on June 4, 2020, which allows federal agencies to waive or entirely bypass environmental review requirements when approving infrastructure, energy, environmental, natural resource, and other development projects. Under EP4, an EPFI would be in technical compliance if it relied on the United States’ own loosened environmental assessment regime to provide financing for a project.

It is concerning that EPFIs can rely on these loosened requirements under local law which will adversely affect communities in the long term, including Indigenous Peoples. BankTrack, along with 27 other civil society organisations, have recently called upon the EPA to provide additional guidance to ensure that projects in all countries are benchmarked against and in compliance with the IFC Performance Standards during the period in which the world is dealing with the global pandemic. In the long term, we continue to advocate for the removal of the distinction between designated and non-designated countries in any future revisions of the EPs.

Projects financed under the EPs are supposed to be financed in a transparent manner, so that external observers can monitor EP compliance and stakeholders can be informed of the benefits they are supposed to reap from the EPs being applied to a project. However, there are still many issues with the reporting requirements of EPFIs under the EPs. These include: the requirement for client consent (which could simply be written into loan agreements as standard); the fact that only two years’ worth of reporting is stored on the EPA website; and that project name information is only reported on a bank-by-bank basis. It is currently not possible to search the reporting data on the EPA website by project name, bank, sector, country or categorisation. We’ve asked the EPA to update the way in which this data is presented, but since they have failed to do so yet, we created our own EP project name reporting database and also a table tool which tracks the reporting status of each EPFI.

Risk management for all

Perhaps the most problematic aspect of EP4 is that, as EP3, EP2 and EP1, the principles focus solely on managing risks to the project, with positive impacts on communities and environment seen as a prerequisite for a successfully performing project (which then guarantees payback of the loan). Wholly absent from this is an enhanced and expanded view on what risk management should deliver. The concept of risk management at the heart of the principles needs to be expanded so that it also encompasses all risks that a project will pose to communities, nature and climate, both locally and globally. The expanded concept of risk should include both climate change risks and potential pandemic risks, highlighted by the COVID-19 pandemic. This would ensure that projects which pose significant risks to the world's climate, such as all those fossil fuel projects, or projects which deeply impact on biodiversity and forests, can not be financed under the EPs, for being ‘too risky’ for all parties involved. Only when this thinking is in place, can the Equator Principles claim to be the tool every bank needs to properly manage risks.