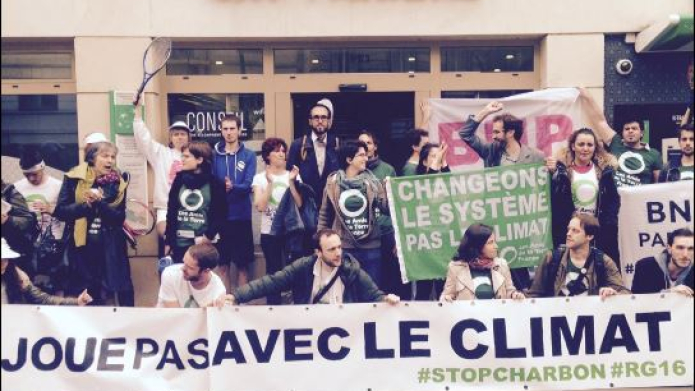 The dust has now settled on this year’s bank AGM season in Europe. However, with new, progressive coal financing policy announcements thin on the ground, it’s been more a case of the dust gathering on the coal finance toolkits of most of Europe’s big banking names. And this in spite of the usual concerted advocacy from coal campaigners and the growing urgency for the banks to quit coal.

BankTrack issued five new coal banks briefings for the 2016 AGM season, analysing the advances which took place last year in the coal policies of banks such as Crédit Agricole and Royal Bank of Scotland, and pointing out some of the loopholes which remain with the potential to leave a host of climate destructive investments firmly on the banks’ radar.

A pronounced concern dwelt on in the briefings is the scope the banks have continued to allow themselves, despite some tightened coal financing restrictions, to keep on bankrolling coal power in less developed countries. Just ahead of the various bank meetings, a report from the Sierra Club, Greenpeace and CoalSwarm put a figure of close to $1 trillion on the cost of 1,500 new coal plants in construction or at the planning stage around the world, the bulk of them in developing countries.

With the stakes so high – $1 trillion could and should be being devoted to the now vital clean energy revolution – what kind of drum beats, or even smoke signals, were emanating from the European bank AGMs less than half a year after the Paris Agreement? Here we look back at what some of our coal campaign partners were able to disinter amidst a prevailing mood of still very limited climate ambition across the European banking sector.

There have been some impressive moves starting to take place in the German investment world, most notably the world’s largest insurer Allianz’s announcement last November that it is saying goodbye to coal with a divestment worth around €4 billion from coal mining companies and utilities involved in coal power generation. However, at Commerzbank, Germany’s second largest bank and second biggest coal bank after Deutsche Bank, our colleagues at urgewald were still not able to detect a dedicated coal policy – the bank’s board informed at the AGM that a coal policy is finally coming, within the next six months, but declined to provide any further details about it.

Despite a long-awaited review of its mining policy being in the works, and a once pioneering approach to coal power investments now being left behind by advances from other banks, Move Your Money UK and London Mining Network were left scratching their heads at how HSBC is now preparing to deal with its still very large ($698 million doled out to mining and power in 2014) coal portfolio. This was even as its CEO, Stuart Gulliver, spoke to them of a need for an “orderly and just transition” to a low-carbon future. Because, before the party poppers could be popped, Gulliver went on to clarify further about climate considerations at the bank, saying: “We agree with the direction of travel but not with the pace of change.” Titanic, iceberg, let’s rearrange the deck-chairs, shall we?

On the eve of the number one Dutch bank’s AGM came the shocking news that both ING and Rabobank, a self-styled leader in the financing of sustainable energy, had granted loans of 109 million euros in February this year to SUEK, the biggest Russian coal producer and one of the world’s biggest mining companies.

For ING, which announced in November last year that it was reducing its exposure to coal companies with ‘immediate effect’, the policy loophole relates to ending coal finance ‘only for new clients’. ‘Orange is the new green’ may be the bank’s latest sustainability marketing mantra, but it will continue to lend to refinance existing clients such as SUEK. Campaigners from the Netherlands and Poland were told that the bank’s exposure to coal companies is declining, with new figures to be published sometime in the future. Nonetheless, a less than convincing transition out of coal, further backed up by ING’s current involvement in the highly controversial Punta Catalina coal plant project in the Dominican Republic, about which it has thus far declined to respond to NGO warning letters.

It has been a long time coming, but Paul Corbit Brown from the US group Keeper of the Mountains, and regular Credit Suisse AGM attendee, finally heard some magic words at this year’s event: Credit Suisse is now officially excluding some mountaintop removal (MTR) coal companies. The bank’s official line: “Credit Suisse does no business with MTR producers whose share of coal produced with MTR (MTM) in comparison to overall coal (minerals) production crosses a low threshold: 5%.”

As Les Amis de la Terre France discovered at the annual meetings of BNP Paribas, Crédit Agricole and Société Générale, the Paris Summit exertions last year which saw positive coal policy moves from the big three seem to have left them with no fresh ideas about how to kick on and contribute ambitiously to the Paris Agreement goals. If no commitments were made on the TJB2 coal dodgy deal in Indonesia, it did however emerge that Société Générale was not – as rumoured – getting embroiled in the controversial financing of the Batang coal plant, also in Indonesia (Japanese and Singapore based banks disappointingly are going it alone on this longstanding dodgy deal).

It was left however for Les Amis de la Terre, frustrated by the lack of coal exit momentum at BNP Paribas, to take the climate challenge directly to the bank by taking over one of its Paris branches with a polite, direct request that it quit coal now.

Another mountainous challenge was overcome at the Deutsche Bank shareholder meeting where the bank announced – yes – it is calling time on the financing of mountaintop removal mining. With a tragi-comic revelation, the bank's outgoing CEO, Juergen Fitschen, let it be known that “using explosives to destroy the summits of mountains does not seem to us to be a legitimate or ecologically sensible manner of surface mining.” How long, then, until the bank comes clean about its wider illegitimate, ecologically nonsensical support for the global coal industry?

All in all, and in spite of direct campaigner pressure, a rather lacklustre European AGM season of missed opportunities by financial institutions which appear to have no qualms about still being dubbed ‘coal banks’.

Meanwhile, a recent Bloomberg article lays bare the risks being racked up by Australian banks as a result of their predilection for fossil fuel financing, including a lot of coal: “Banks’ exposure to the slowing natural resources sector has reached nearly $50 billion in loans outstanding – worryingly large relative to their capital resources.”

The global banking sector will only feel more heat the longer it sticks with fossil fuels. It is now clearly lagging behind wider divestment initiatives sweeping the investment world, and the word is getting out, as seen by last week’s coverage of ‘Shorting the Climate’, this year’s Fossil Fuel Finance Report Card. Quitting coal rapidly has to be priority number one for the banks – for their own good and for that of the climate.