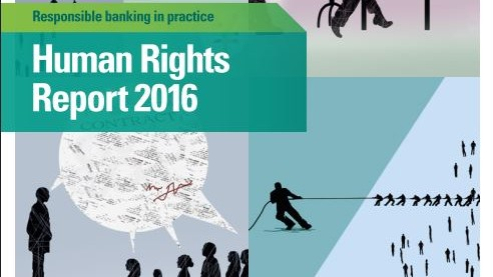 At the end of December last year, ABN AMRO released its first  Human Rights Report - a significant step by the bank as it is the first report from any financial institution to use the new UN Guiding Principles Reporting Framework as its basis, and one of the first three such reports from any company in any sector. Kudos, then, to ABN AMRO for pioneering this.

Developed by Shift and Mazars and launched in 2015, the Reporting Framework brings a welcome systematic approach to the analysis of the most “salient” human rights risks. Following internal workshops and discussions with external stakeholders, ABN AMRO identified these most salient risks as privacy, discrimination, labour rights and land-related human rights.

Reporting on human rights by the largest banks to date has been chronically lacking in detail, especially when it comes to giving details of cases where banks found themselves financing  companies or projects causing human rights abuses, and how they managed the situation to address or mitigate these abuses. This is what the UN Guiding Principles call for, and it is one of the main gaps identified in the performance of 45 large banks in our 2016 “Banking with Principles?” report. (ABN AMRO fell below the size threshold for inclusion in this report, but was ranked in the top ten in our 2014 report, scoring five out of 12). So we had high hopes that this report would squarely address some of the human rights related issues that BankTrack and others have raised with ABN AMRO in recent years. However on this score we were left disappointed.

ABN AMRO does discuss some specific human rights impacts it identified in this report. For example the report comments on an article from 2014 on the Dutch opinion site  De Correspondent alleging that ABN AMRO unfairly used private client data to target special offers for baby products to clients who were found to have claimed child benefits for the first time. In hindsight this was not morally acceptable, the bank concedes.

However there are much more serious human rights impacts the bank doesn't discuss. For example, it doesn’t mention allegations of child labour in the supply chain of one of the bank’s clients, Indonesian pulp and paper giant APRIL. This was identified with photographic evidence by the Indonesian environmental coalition Eyes on the Forest in 2014 (the same year as the De Correspondent article, so clearly within the report's scope), and included on BankTrack's profile of APRIL - which is linked to our profile of the bank. Child labour of course fits within the bank's framework of salient issues. Omitting serious allegations like these casts doubt on whether the bank has its priorities straight.

The bank also neglects to mention its finance for one of the companies behind the Dakota Access Pipeline, despite, as we reported earlier this month, having a quite positive story to tell in this regard. The bank has made clear that is is prepared to end its relationship with the company if an "acceptable non-violent solution" is not found that is acceptable to all parties, including the Standing Rock Sioux, who have led the opposition to the pipeline. While that commitment was made in February, after the report's publication in December last year, the bank had already made a statement which acknowledged its finance for the pipeline company and said the bank and the company were "in constant dialogue".  As a clear land-related human rights impact, it is curious that this did not find its way into the bank's human rights report.

Notwithstanding these substantial ommissions, the fact that the bank has attempted systematic reporting on its human rights impacts is welcome, and the report is a solid base on which to improve in future years.  It is also refreshingly candid on areas where the bank falls short, recognising for example that it does not currently have a remediation process in place for individuals or communities, and committing to pay more attention to this issue going forward.

We look forward to reading about the bank's progress towards establishing such remediation channels, as well as about any further examples of human rights abuses linked to the bank's finance, in ABN AMRO's second Human Rights Report - and we stand ready to provide input on the impacts we would like to see covered.