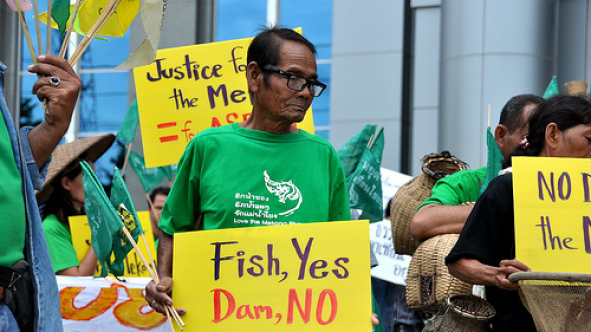 On August 7, a coalition of 37 Thai villagers filed a lawsuit in Thailand's Administrative Court in Bangkok aimed at stopping the Xayaburi Dam, which is currently under construction illegally in Laos. Even though the Xayaburi Dam is not located in Thailand, Thai actors have played a critical role as developers, financiers, and most importantly, buyer of the electricity. If the dam is built, it will cause harm to Thai people living along the Mekong River in the northeast provinces. The suit is against five Thai government bodies - including the Electricity Generating Authority of Thailand (EGAT), the body that has agreed to buy 95% of the hydropower from Xayaburi - and claims that the Thai government should have considered the project's impacts to Thai villagers' livelihoods before agreeing to purchase power from the dam.

The filing was accompanied by almost a hundred Thai villagers and fisherfolk from eight Mekong provinces carrying banners, mock fish and fishing gear. The villagers wanted people to understand why they are asking for justice, and how they depend on the river for their food and livelihoods. The Court's staff welcomed the villagers, allowing them to conduct a spiritual ceremony for the mighty Mekong River and demonstrate their traditional Mekong fishing methods to the journalists who were present. Here are some photos from the event:

It was not an easy decision for villagers to use legal action to fight against EGAT, a giant state-owned enterprise that has so far disregarded the villagers' concerns about the ways the dam would cause them harm. They made the final decision to go to court because construction on the dam has continued even though there is no approval from other riparian countries who would be affected, including Vietnam and Cambodia.

As Thai citizens, the villagers hope their concerns about the Xayaburi Dam's transboundary impacts will be recognized, and their rights will be ensured.