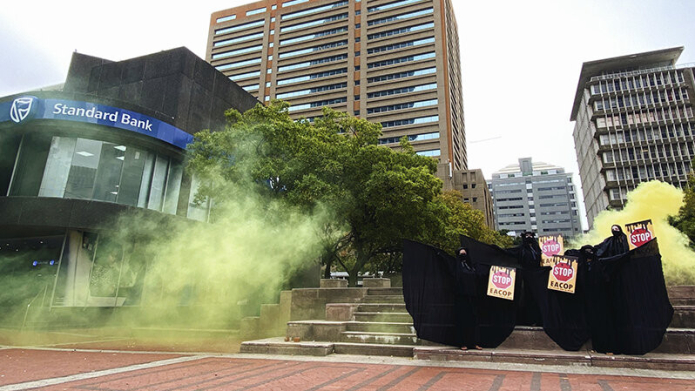 In order to promote the long-term success and sustainability of the Company, taking into account the significant risks and opportunities associated with climate change, and in accordance with the Company’s stated support for the goals of the Paris Agreement, shareholders recommend and request that the Company and its Directors include, in its reporting to shareholders for the year ending 31 December 2021, the Company’s plans, if any, to set and publish a strategy, and short-, medium-, and long-term targets, to reduce its exposure to fossil fuel assets on a timeline aligned with the goals of the Paris Agreement (the “Paris goals”).

The resolution was filed 23 working days before the AGM. The JSE’s Listing Requirements only require 15 working days’ notice for ordinary resolutions. The co-filers would have liked to provide Standard Bank with more time to consider the resolution, but this was not possible as there had been no indication, prior to the bank’s 31 March Notice of AGM, that the AGM would be scheduled for 27 May. Previous indications were that the AGM would be held on 29 June.

Standard Bank has not yet indicated whether it will table the resolution.

Why was the resolution filed?

Standard Bank’s reporting acknowledges that climate change is material and poses significant risks, including to its ability to generate value for its shareholders over time. In each of the TCFD Report, the Fossil Fuels Financing Policy, and the Thermal Coal Mining Policy, Standard Bank also states that it supports the goals of the Paris Agreement.

However, none of the bank’s disclosures provide any strategy or measurable targets that show how, and when, it will align its financing with this stated commitment to the Paris Agreement’s goals. This is in stark contrast to Nedbank, for example, which recently released an Energy Policy targeting zero fossil fuel exposure by 2045, and including specific short-, medium-, and long-term deadlines for doing so.

In order to better appraise the long-term investment proposition, investors require more information to understand what steps Standard Bank is taking, if any, to reduce its exposure to fossil fuel assets in the short-, medium and long-term, on a timeline aligned with the Paris goals.

The opinion concludes that:

Robyn Hugo, director of climate change engagement at Just Share, says: “Standard Bank is Africa’s biggest lender by assets, and it is poised to facilitate significant fossil fuel expansion on the continent. This is at odds with the bank’s repeated statements that it is committed to the Paris Agreement goals. Without a strategy, and measurable targets, it is impossible for shareholders to evaluate the strength of the bank’s commitments to align its lending activities with Paris. This non-binding resolution simply calls for the bank to disclose whether it has any such strategy and targets. There is no reason why Standard Bank should not already have agreed to table it, and embarked on the administrative process of notifying shareholders of the change to its proxy voting form.”