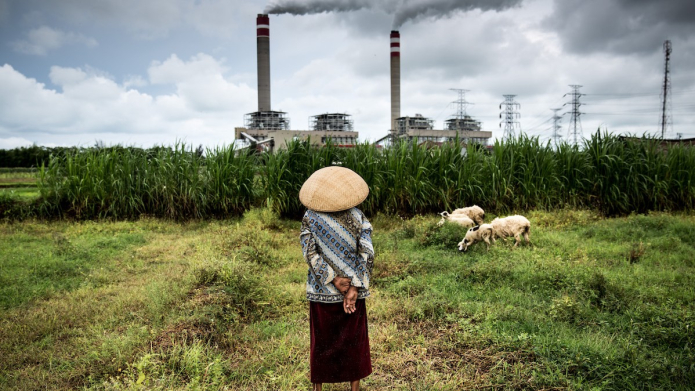 A shepherdess watches over her flock of sheep that graze near a coal power plant in Jepara, Central Java. Photo: Kemal Jufri/Greenpeace

A new analysis from environmental finance group Market Forces shines a light for the first time on Singaporean banks’ continued funding of the coal industry, despite public pronouncements on climate action.

“Whilst the Singaporean Government has declared 2018 the ‘year of climate action,’ the country’s banks appear to be stuck in the last century in terms of their lending practices.”

“If the world is to meet the agreed goal of keeping global warming to less than 2˚C, 80% of existing fossil fuel reserves cannot be burned. Financing new coal-fired power stations is simply off the cards.”

Worryingly, the lending pattern is showing no sign of abating. DBS has been named as part of a syndicate in four 1200MW coal-fired power plants in Vietnam – Nam Dinh 1, Nghi Son 2, Vinh Tan 4 and Vung Ang 2 and is also a financial adviser for a number of planned coal-fired plants in Indonesia including the Jawa-6 (2000MW), Jawa-9 (600MW) and Jawa-10 (660MW) plants.

Despite this, in November 2017, Mike Power, Chief Operating Officer for Technology and Operations, DBS Bank stated that “climate change is among the most pressing challenges of our time, and one that needs to be tackled urgently if we are to preserve the habitability of our planet.”

“For DBS to acknowledge the severe risks that climate change poses to humanity, while continuing to fund new coal projects that threaten our ability to even contain those risks is an act of breathtaking hypocrisy,” said Vincent.

Remarkably, none of Singapore’s big three even have a climate policy in place, let alone a commitment to restrict lending to the biggest sources of greenhouse pollution.

Fourteen major commercial banks from the US and Europe have adopted policies that end direct financing of coal power plants. No Asian bank has so far produced such a policy.

“If Singapore’s banks want to see themselves as leaders on climate change, they can start acting as leaders. At the moment, OCBC, DBS and UOB are well behind their global competitors on policy action to restrict fossil fuels and boost renewables. 2018 needs to be the year in which they catch up,” said Vincent.

To view the research in full, please visit this page.