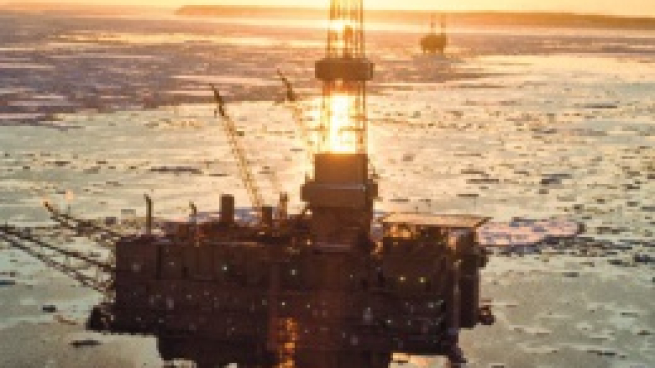 A new report released today warns investors of the risks to shareholder value from Royal Dutch Shell's Alaskan Arctic drilling programme. The report, "Frozen Future: Shell's ongoing gamble in the US Arctic" - is published by BankTrack members Greenpeace, Platform, and Pacific Environment, together with ShareAction, Oil Change International and Oceana.

Operational failures, public pressure and legal challenges forced Shell to abandon its 2012, 2013 and 2014 US Arctic drilling programmes but the company still remains committed, at least publicly, to the region.

Other oil majors - Statoil , Conoco-Philips and Total - have all stepped back from drilling for oil in US Arctic waters - largely at the project level - for reasons of cost, as well as regulatory uncertainty. Total has announced that it would not drill for oil at all in the Arctic Ocean due to the reputational risk of any spill in the region .

Despite spending  over £5 billion in the US Arctic Ocean so far - a figure that dwarves the expenditure of other oil majors - Shell has failed to drill for oil there.. Shell's capital investment in 2013 is at a record high, while at the same time, the company has recorded a steep drop in profits.  Shell appears ready to ignore the economic, legal, operational, regulatory, reputational,  and environmental risks of the Arctic, all detailed in the report, in pursuit of highly uncertain returns.  ‘Frozen Future' argues that shareholders should analyse whether the high cost, high risk US Arctic Ocean represents an appropriate allocation of shareholder capital.

The report explores a number of operational and economic risks facing Shell from offshore US Arctic drilling including:

Doug Norlen, Policy Director at Pacific Environment said, "BP has paid out over $38 billion after their Deepwater Horizon.  Yet, Shell is self-insured to only $1.15 billion per oil spill.  This means, in the likely event of an Arctic oil spill, Shell's shareholders will end up holding the bag."

Anna Galkina, researcher at Platform said, "The recent court judgement following a lawsuit by Alaska Native and environmental groups was the latest setback in Shell's plans to drill in the US Arctic Ocean. It's highly doubtful that the many risks associated with this project are worth taking from an environmental, human rights, or financial point of view. Shell's shareholders should challenge the company's continued focus on this high risk project."

Louise Rouse, director of engagement at ShareAction said: “Shell is the biggest shareholding in almost every UK pension fund. As such savers in those pension funds are exposed to the potentially catastrophic consequences of a major spill in the US Arctic Ocean. As shareholders these pension funds have the opportunity to express their views on company strategy. As the new CEO, Ben Van Beurden, prepares to deliver his vision for the future of Shell on 13th March, shareholders should demand withdrawal from a high risk project that requires a highly capital-intensive investment for uncertain return.”

Charlie Kronick, senior climate advisor at Greenpeace UK said: “Now is a good time for Shell to change direction on the Arctic. There is a growing divide within the oil industry over the feasibility of Arctic Drilling, and other majors have walked away from what they now recognise was a bad bet.”