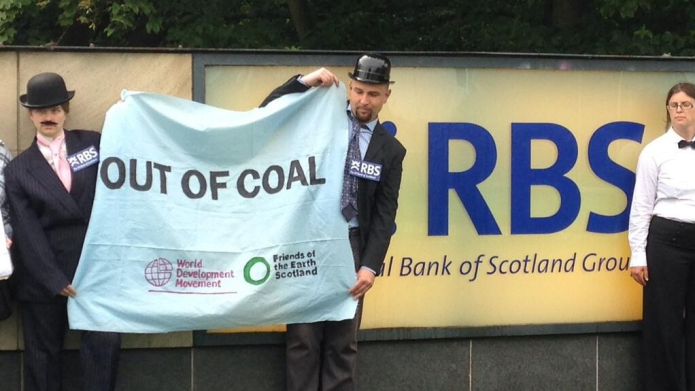 Protestors target RBS at its 2014 AGM in Edinburgh, demanding that the bank pull its money out of coal. . Photo: Global Justice Now!, Friends of the Earth Scotland

Protestors will target RBS at its AGM in Edinburgh on Wednesday, demanding that the bank pull its money out of coal. Protestors dressed as bankers will hand out lumps of coal disguised as luxury chocolates - fossil rochers - while others will hold placards reading ‘RBS out of coal'.

RBS invests more in coal mining worldwide than any other UK bank, providing the industry with more than £4 billion since 2005. It ranks eighth of all banks globally for its financing of coal.

Coal has a major impact on climate change, releasing more greenhouse gases per tonne than any other fuel. Coal also devastates local environments, destroying the lives of people living in areas where it is mined.

The prospect of constitutional change following the Scottish independence referendum in September, whatever the outcome, has led to calls for reform of the banking sector in Scotland. Campaigners believe RBS ending its financing of coal would be a crucial part of this.

World Development Movement Scotland campaigner Liz Murray said today: "Coal is one of the most polluting of all fossil fuels, bad both for people and for the planet. It's a disgrace that RBS, which is largely owned by us, the taxpayers, still bankrolls this dirty, destructive industry. We need RBS to set a timeline for phasing out its fossil fuel investments, and to pull out of financing coal."

Richard Dixon, director of Friends of the Earth Scotland, said today: "Despite being owned by the people, investments in coal show RBS is not serving its public function. A truly sustainable banking sector can only work on smaller scales with more democratic control. Breaking up RBS could help us reach this goal."

RBS announced in April that it would end its financing of ‘mountaintop removal' coal mining, following opposition from people in the Appalachian region of the United States who have seen the tops of more than 500 mountains blasted off for coal.

But the bank continues to finance coal mining companies operating worldwide, including in southern Africa, Colombia, Australia and central Europe. It has invested a total of £3.3 billion since 2009 in mining giants BHP Billiton, Anglo American and Glencore Xstrata, the companies behind the massive Cerrejón mine in Colombia. Cerrejón is the biggest coal mine in South America and is fiercely opposed by local people, including the indigenous Wayúu whose territory it has destroyed.