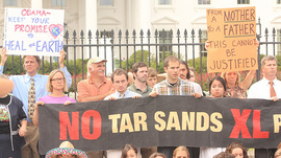 Administration deals a blow to Big Oil and its cronies in Congress, takes a stand for Americans' health and livelihoods, and a safe climate

Today, the Obama administration rejected the permit for the Keystone XL tar sands oil pipeline sought by Canadian oil firm TransCanada, determining that the project was not in the national interest.

"President Obama has shown bold leadership in standing up to Big Oil and rejecting the Keystone XL pipeline," said Erich Pica, president of Friends of the Earth. "The climate movement took on Goliath and won, demonstrating its growing strength. Sustained grassroots pressure aimed at holding the president accountable to the public interest proved more powerful than all the lobbyists and campaign cash the oil industry could muster."

This iconic David versus Goliath victory was fueled by years of persistent grassroots campaigning to stop the project led by indigenous activists, environmentalists, farmers, ranchers and youth climate activists. Americans submitted more than 250,000 public comments against the proposal, several thousand more turned out in small-town Nebraska, in Texas and in Washington, D.C. to testify against the pipeline in public hearings -- and 1,253 people played a pivotal role in August by getting arrested during peaceful sit-ins on the president's doorstep.

Investigative efforts led by Friends of the Earth and allies exposed the State Department's review process as hopelessly corrupted by conflicts of interest and oil industry cronyism in advance of President Obama's call for a new review of the project in November.

"Today's announcement is a welcome example of President Obama following through on his promise that corporate polluter lobbyists will no longer set the agenda in Washington," said Pica. "The Keystone XL pipeline would have been dirty at both ends, dangerous in between, and certainly not in our national interest. Big Oil and its bought-and-paid-for confederates in Congress couldn't drown this dirty reality despite all of their threats and bullying."

"This defeat for Big Oil is a huge victory for the health and safety of Americans. It belongs to the indigenous communities who first sounded the alarm on the dangers of tar sands extraction, to the Nebraskan farmers and Texan ranchers who withstood TransCanada's bullying in the name of their land and livelihoods, to the activists from across the country who were arrested on the president's doorstep, and to all of us fighting for a safe climate and justice-fueled future," said Pica.

The Keystone XL pipeline would have pumped the world's dirtiest oil -- tar sands oil -- from Canada across America's heartland to Texas. The nation's top climate scientist, Dr. James Hansen, has said that fully exploiting the tar sands could destabilize the climate to the point of no return. Tar sands extraction is poisoning water downstream from the massive mining sites in Canada and tar sands refining would have increased air pollution that causes lung disease and other respiratory diseases in communities near refineries in Texas.

"Allowing expansion of the destructive tar sands oil industry is not and will never be in our nation's interest. We will remain vigilant to ensure that all of Big Oil's attempts to wring profits from the tar sands at the public's expense are defeated -- and that better, clean alternatives are deployed," said Pica.

For more information on the Keystone XL pipeline see: http://www.foe.org/projects/climate-and-energy/tar-sands/keystone-xl-pipeline