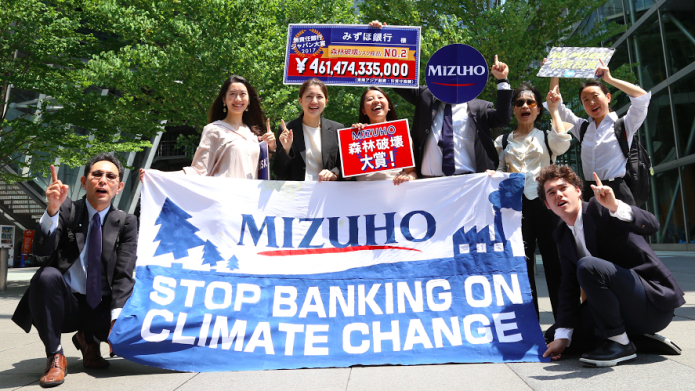 350.org Japan, joined by Rainforest Action Network (RAN) and Greenpeace Japan, drew attention to Japanese banks’ persistent coal financing through a series of announcements ahead of the Responsible Investor Asia 2018 (RI Asia 2018)  event. RI Asia 2018 brings together international investors, analysts, and other critical financial stakeholders in Tokyo to discuss sustainable finance. They cautioned that continued coal financing by the Japanese financial sector runs counter to the international trend within the industry toward decarbonization.

Mobilizing capital toward decarbonization is at the heart of the Paris Agreement, which commits governments to make “financial flows consistent with a pathway towards low-carbon, climate-resilient development.” In this shift, there is significant interest in the role of the financial services industry, which is a driving force of the modern economy. Banks have a critical role to play in the withdrawal of capital from carbon intensive industries through their financing decisions. Led by banks in Europe, major international banks are starting to restrict finance towards the most carbon intensive industries, starting with coal. Recognizing the risk of stranded assets, international banks are starting to align their business strategies in line with the Paris Agreement.

The NGOs issued a warning to Japanese banks and other financial institutions that failure to divest from coal could put Japan behind the curve vis-a-vis international peers. On March 28, Rainforest Action Network and other partners released the ninth annual “Banking on Climate Change: Fossil Fuel Finance Report Card 2018” which ranks bank policies and practices related to the financing of some of the most carbon-intensive, financially risky, and environmentally destructive fossil fuel sectors. The three major Japanese financial groups, Mitsubishi UFJ Financial Group, Mizuho Financial Group and Sumitomo Mitsui Financial Group, were among the lowest ranked for their financial policies pertaining to coal power and mining. Indeed, the Japanese banking sector continues to finance coal-related companies and projects heavily, and many projects linked to Japanese finance are causing serious environmental damage and human rights violations.

As Japanese financial institutions resist the global trend towards decarbonization, U.S. and European banks are becoming more forward-thinking in restricting finance for the fossil fuel industry, predominantly coal. Not only is this decision important from an environmental perspective, but the economic driver is becoming harder to ignore – given the long-term risk that tighter regulations on carbon emissions and falling prices for renewable energy will make such resources stranded assets. Coal has the highest carbon dioxide (CO2) output of all fossil fuels, and it is now becoming common sense for this resource to be first divestment target.

At today’s joint event, RAN presented a Japanese summary version of the “Banking on Climate Change 2018” report, targeting Japanese investors, banks and financial regulatory agencies. Hana Heineken, RAN Senior Campaigner on Responsible Finance, said, “While the response to climate change risk is accelerating around the world, the three megabanks in Japan are heading in the opposite direction by continuing their financing into fossil fuels and deforestation-related sectors. Banks are accountable for aligning their lending and investment policies with the Paris Agreement, and must end their financing of fossil fuels that pose the highest climate risk. As the largest shareholder of Japan’s three megabanks, Japan’s Government Pension Investment Fund also bears responsibility. “

Martin Norman, Sustainable Finance Campaigner of Greenpeace Nordic and Marina Lou, Energy Finance Campaigner of Greenpeace International provided commentary around the briefing paper “Swimming against the tide: Japanese banks and climate change” that Greenpeace Japan announced today. They reported, “The three major Japanese banks have not announced plans to decarbonize their portfolio at all. They have become a minority amongst the financial institution of the OECD countries. This paper addresses the investors of the three Japanese major banks and raises the risks that they should consider when these banks continue to finance coal-fired power plants. Greenpeace will keep engaging both investors and Japanese financial institutions.”

350.org Japan indicated that in late April it would be starting a petition targeting Japan’s major banks to demand that they stop financing new coal developments. 350.org Japan Divestment Campaigner Shin Furuno stated, “We cannot construct any more new coal-fired power plants if we are to keep the world’s average temperature rise to less than 1.5-2 degrees Celsius as laid out in the Paris Agreement. Commercial banks have a responsibility to help sustain a habitable living environment for future generations. We will call on Japan’s major banks to implement responsible banking policies starting with concrete steps to stop financing new coal developments.”

At this year’s Responsible Investor Asia 2018, there will be panel discussion titled, “Collaboration on Climate Change and Adaptation towards a low carbon economy.” This exemplifies the critical nature of decarbonization in the financial services industry. The NGOs vowed that they will each continue efforts to get Japanese banks to take on banking policies in line with the Paris Agreement.