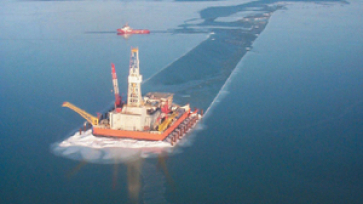 Financial backers behind the Kashagan oil field in Kazakhstan have been called upon today to take action to resolve the environmental and health problems caused by offshore exploration at the 13 billion barrel project, located 20km off the northern Caspian Sea coast.

In a letter to BNP Paribas, the leading financier of the project, and other private banks involved   sixteen local and international environment organisations are demanding that the institutions ensure an adequate and transparent plan for mitigating the project's environmental and social impacts is in place before any construction continues. The groups are also calling on the banks to make compliance with this plan a central and enforceable condition for any future financing of the Kashagan project, and to support for a complete independent scientific assessment of the social and environmental impacts of Kashagan’s development.

The organisations have raised concerns over environmental and public health dangers associated with Kashagan’s development and violations of international standards, including the Equator Principles, in the development of Kashagan’s offshore and onshore operations .

Galina Chernova, Director of the Atyrau based NGO “Center Globus” stated:
“The Kashagan oil field has been under development since 2002 and operations are expected to begin at the end of 2011. At present, the Environmental and Social Impact Assessment (ESIA) and associated Action Plans to comply with IFC Performance Standards and World Bank/IFC Pollution Prevention Abatement standards have not been disclosed by private financing institutions nor by the Agip KCO consortium, operating in the field. The EIA is not available in Kazakh, our national language and the only language that most of the communities directly impacted by the on shore facilities speak”.

Paul de Clerck of Friends of the Earth Europe stated:
“The Kashagan oil field is putting people and the planet at risk. Since offshore operations began in the Kashagan field ten years ago, local observers have registered alarming impacts on biodiversity. Species at risk include the endangered Caspian Seal and Beluga Sturgeon. In the event of an accident tens of thousands of people living in vicinity could be severely impacted and many people could be killed by toxic gas emissions. The banks should not finance the project as long as these problems are not solved.”

Elena Gerebizza of Campagna per la Riforma della Banca Mondiale (CRBM) stated:
“The credibility of private banks is at stake. They committed to implement the Equator Principles in the development of the Kashagan oil field and they should stick to their promise. Development operations should not continue until  environmental problems caused by offshore exploration and construction around the Kashagan field are solved. The preservation of the Caspian Sea, the largest reserve of fresh water in Central Asia, and of the fragile Northern Caspian ecosystem are at risk due to private banks irresponsible behaviour”.

Yann Louvel, FoE France:
The BNP Paribas 2006 CSR report stated, “The recent conclusions reported by the IGECC in Paris reinforce BNP Paribas’ commitment to combating climate change”. Developing Kashagan will lead to the consumption of about 513 million barrels of oil per year and to the production of 224 million tonnes of CO2 per year. The extraction of Kashagan oil will also cause emissions of ‘sour gas’ with one of the highest levels of H2S encountered in the offshore industry and to the production of about 110 kg of sulphur per tonne of extracted oil. Thus, financing Kashagan carries significant climate consequences and undermines the positive outcomes of any financing in the renewable energy sector.