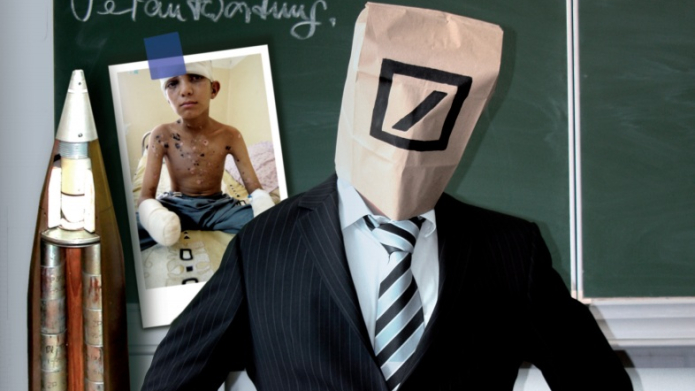 A day before Deutsche Bank's annual shareholders meeting, German NGOs criticise the new leadership of the bank, Anshu Jain and Jürgen Fitschen, on their poor sustainability performance. "A year ago, the new leaders promised a fundamental shift in the bank's business towards an ethical and ecological responsible bank. However, this is not taking place" says Dr. Barbara Happe of the environmental and human rights organisation urgewald. According to Happe, profit at the expense of people and the environment remains at the heart of Deutsche Bank's business model.

Recent research by urgewald and Facing Finance reveals that Deutsche Bank continues to provide money to companies that ignore environmental and human rights issues and damage the climate. For example, the bank still issues bonds and shares for arms manufacturers that deliver arms into conflict areas, as well as for nuclear companies. It also continues activities on food speculation.

"Just the financial services of Deutsche Bank for 7 of the 10 most controversial companies account for more than 2.8 billion Euro" laments Thomas Küchenmeister of Facing Finance. He refers to a ranking of RepRisk, an agency that informs banks about the ecologic and social reputational risks of their clients. Deals with arms manufacturers alone already amount to nearly 1 billion Euro, despite the fact that the bank claims in its sustainability report that it no longer offers any financial product that is directly linked to nuclear weapons, cluster ammunition, land mines or human rights violations.

"Deutsche Bank continues to conduct business with producers of nuclear weapons and cluster ammunition, albeit less deals with the latter", says Küchenmeister. He criticises financial relations of Deutsche Bank with arms manufacturers such as Rheinmetall, a manufacturer that produces weapons in, and delivers weapons to countries that disregard human rights.

Deutsche bank also continues to support companies involved in Mountain Top Removal coal mining practices. This mining, conducted in the Appalachian Mountains in the US involves literally blasting away the top of a mountain, leaving the landscape destroyed and the mining waste ending in the rivers poisoning the drinking water. Paul Corbit Brown, spokesperson of  the organisation 'Keeper of the Mountains' that resists the destruction of the region for coal mining, came over from the US to confront the bank with the impact of MTR.

"Deutsche Bank has provided money to Alpha Natural Resources and Arch Coal, companies that exercise this type of mining. The bank doesn't exclude this kind of companies from financing, which is irresponsible", criticises Corbit Brown.

Deutsche Bank also counts amongst its clients the controversial Rio Tinto mining company, one of the world biggest producers of uranium. Its 'Roessing' mine in Nambia, the world's third largest uranium mine, consumes as much water as the Namibian capital Windhoek. "In a arid country such as Namibia this high water consumption of Roessing is a huge problem. Further, mining workers and neighbouring communities are suffering from health problems. Not surprising since the uranium concentration in the groundwater, soil and sediment has strongly increased. Deutsche Bank should not support such clients", demands Bertchen Kohrs of the environmental organisation Earthlife Namibia.

Deutsche Bank is big in food speculation too. "The investment funds of Deutsche Bank invested 3.79 billion Euro into bets on the price of food commodities, such as wheat and corn", explains Oxfam's expert David Hachfeld. "Food speculation increases the risk of price fluctuation and hunger. Poor people in developing countries can't afford basic food if the price is rising. Deutsche Bank knows the risk, but prioritise the profit." Last year the bank even broke its promise to shelve the establishment of new funds until having finished a research into the risk of speculation increasing hunger. However, according to research conducted by Oxfam, Deutsche Bank last year launched five new investment funds speculating on prices of agricultural raw materials.

Taking into account this vast range of critique, NGOs rate Jain's and Fitschen's first year performance as very poor. They have summarised their judgement in a school report, which will be handed over to shareholders at the meeting. They call upon shareholders to donate their dividend to communities suffering from the bank's business.