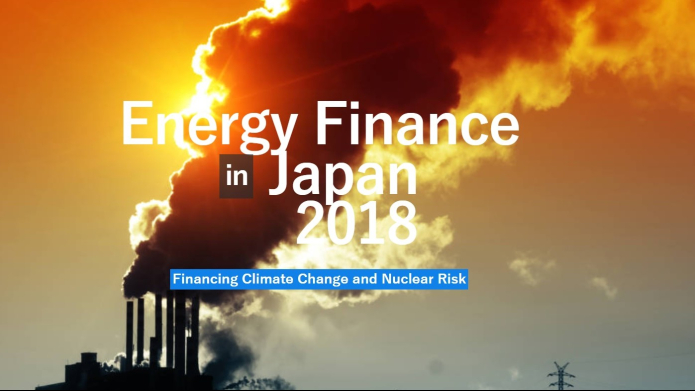 Today, a report produced by 350.org Japan revealed that since the Paris Climate Accord was concluded Japanese financial institutions have increased their financing of domestic coal power development.   From January 2013 to July 2018, 151 Japanese financial groups and their subsidiaries surveyed (including banks, asset management firms and insurance companies) provided approximately US$80 billion in loans and underwriting services to 26 Japanese companies involved in coal development, fossil fuels, and nuclear power. The surveyed institutions also invested approximately US$12 billion in the bonds and shares of those companies. The research also showed Japanese financial institutions increased their loans and underwriting services to the companies engaged in coal development after the Paris Climate Accord was signed in 2015. Mizuho Financial, Sumitomo Financial Group and Mitsubishi UFJ were the top three creditors and provided approximately 62% of the credit identified as attributable to coal development. To date, 964 institutions representing US$6.24 trillion assets under management have pledged to divest from their investments in coal, oil, and gas companies for moral, political, and economic reasons. The Japanese financial sector is an obvious outlier, trailing its international peers in the trend towards fossil fuel divestment.   “These findings stand contrary to the positive movements that have been emerging from the Japanese financial sector to restrict new financing to coal power plants,” stated Shin Furuno, Japan Divestment Campaigner for 350.org. “European and American financial institutions are moving quickly not only to restrict new finance to coal projects but to divest from all coal related companies, in recognition of the risk that coal will become a stranded asset. The potential for a carbon bubble leaves Japan’s economy substantially vulnerable, where exposure to coal is high in both the public and private sectors.” 350.org Japan’s report also revealed 38 financial institutions found to have no financial relationships with any of the selected companies engaged in coal development, fossil fuels, and nuclear power. In a recent 350.org Japan poll, nearly 60% of 2000 Japanese respondents surveyed answered that they would like for their bank to commit to socially and environmentally responsible lending and investment policies.   “Japanese people are becoming more and more aware of the dangerous effects of climate change through the record breaking heat and catastrophic rainfall that the country experienced this summer and it is absurd that Japan’s major banks are continuing to fund new coal fired power development which will only worsen these impacts,” added Furuno. “350.org Japan will encourage financial institutions who were found to be fossil fuel and nuclear free to verify those findings so that Japanese people can choose greener banking alternatives that do not worsen the global climate crisis.”   The full report Energy Finance in Japan 2018: Funding Climate Change and Nuclear Risk is available at: http://world.350.org/ja/energy_finance_report2018_eng/