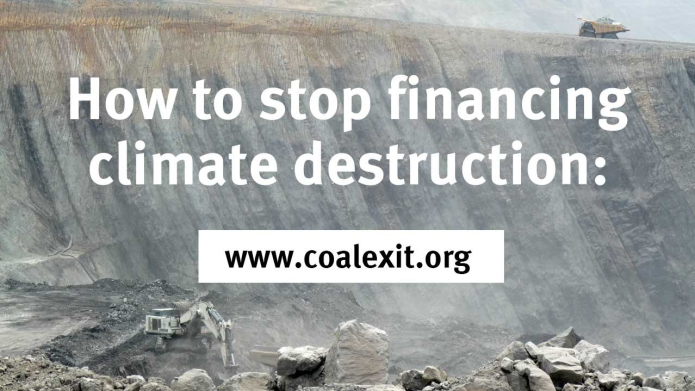 Today, the environmental NGO urgewald and its partners reveal which companies are at the forefront of plans to expand the world’s coal-fired power capacity by a staggering 42.8%. urgewald’s previous in-depth research played a key role in initiating the coal divestment actions of the Norwegian Government Pension Fund and the insurance company Allianz.

Currently, over 1,600 new coal plants and units are planned or under development in 62 countries. If built, they would add over 840,000 MW to the global coal plant fleet.

“The companies pushing forward this glut of new coal infrastructure pose a threat to us all, as their projects would bury our chances of keeping global warming well below 2°C,” said urgewald’s director, Heffa Schuecking. “When we began our research, we realised that most banks and investors don’t have a clue who the world’s top coal plant developers are. Our new database closes this gap by providing a ‘Who’s who’ of the global coal plant pipeline. It is the first forward-looking divestment tool for banks and investors and we hope it will be widely used.”

The database urgewald has published at the www.coalexit.org website identifies the top 120 companies responsible for two thirds of the new coal power stations planned around the globe. All in all, these 120 companies aim to build over 550,000 MW of new coal power plants – this is approximately 2.5 times greater than India’s entire coal plant fleet.

It is especially worrying that many new coal plants are planned in ‘frontier’ countries, which have little or no coal-fired capacity, and will thus lock them into a coal-dependent future for decades to come.

“Egypt does not have a single coal-fired power station, but if companies like Shanghai Electric, ACWA Power and Orascom have their way, over 17,000 MW of coal-fired capacity will be installed in the country,” said Schuecking.

“In most of these countries, there is massive public resistance to these plans,” says Lidy Nacpil, coordinator of the Asian People’s Movement on Debt and Development (APMDD). “Banks and investors need to blacklist companies that are driving ever new countries and regions into a destructive cycle of coal dependency.”

“If the Chinese government truly wants to position itself as a global climate leader, it needs to rein in its state-owned companies that are flooding the world with new coal power plants,” says Trusha Reddy, Coordinator of the International Coal Network.

Companies from other Asian countries such as South Korea and Japan also play a prominent role in the coal power pipeline. Japan’s Marubeni is the 26th largest coal plant developer worldwide and is involved in joint ventures totalling over 13,000 MW of new coal in 9 countries. Among these are many projects in ‘frontier’ countries like Botswana, Egypt, Mongolia and Myanmar.

“Although the majority of coal plant developers are from Asia, international banks and investors from Europe, North America and Australia all play an important role in financing their dirty business,” said Heffa Schuecking.

Bonds and shares of top coal developers such as NTPC, KEPCO, Marubeni, Adani or China Resources are routine positions in the portfolios of large international investors and banks. Even institutions that have already taken steps to divest from the coal industry such as AXA, Allianz or CalSTRS still hold investments in coal plant developers.

“What we’ve learned from our research, is that coal-based revenue or power generation thresholds fail to capture many of the coal plant developers,” explained Schuecking.

Only 1/3 of the top coal plant developers have a coal share of revenue that is higher than 30%, the divestment threshold applied by Allianz and the Norwegian Government Pension Fund.

The remaining 2/3 are companies that are either very diversified like Marubeni or come from other sectors, such as the Vietnamese oil company PetroVietnam or the Malaysian company ToyoInk. ToyoInk is an especially bizarre case. The company currently manufactures printing inks for the Malaysian packaging industry, but has decided that its future lies in the coal plant market.

“This exemplifies why we developed this database,” said Schuecking. “Many of these companies are not traditional coal companies and would otherwise not be recognised by the finance industry. Ours is the first list that names and shames the companies whose coal power plans are paving the road towards climate chaos.”

For financial institutions, saying ‘Yes’ to the Paris Climate Agreement must mean saying ‘No’ to coal plant developers.

Full database, infographics and more information is available at: www.coalexit.org

This database is the first publication of a larger research project, investigating over 1,000 companies that are part of the thermal coal value chain. Further data will be published in autumn 2017.

Partner organisations to this publication