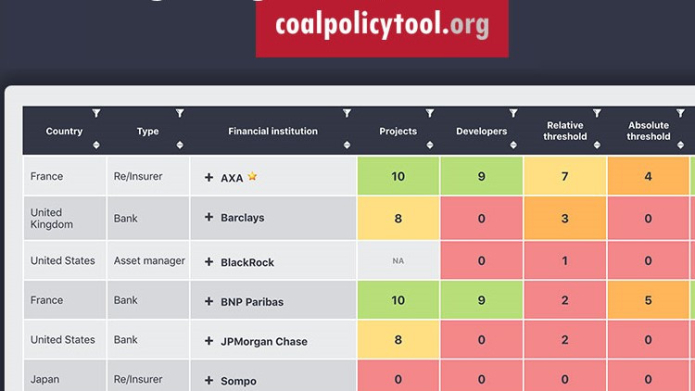 Reclaim Finance, in partnership with 26 other NGOs (1), is releasing the first online tool to identify, assess, and compare the policies adopted by financial institutions worldwide to restrict or end their financial services to the coal sector (2). The Coal Policy Tool rates the coal sector policies of 214 financial institutions on a consistent and transparent scoring grid built upon five key criteria; it also names the largest banks, re/insurers, asset owners and asset managers that have not begun taking steps on the coal policy road (3). The tool, which will be updated in real-time, spans 30 countries, from Australia to the United States. The Coal Policy Tool helps users to easily identify the good, the bad, and the in-between of policies adopted by financial institutions worldwide. It is accessible at coalpolicytool.org.

The number of coal policies has been growing fast since the adoption of the Paris Agreement in 2015. The Coal Policy Tool is the most comprehensive database assessing the quality of existing policies against the goal of keeping global warming below 1.5 degrees Celsius above pre-industrial levels.

In a snapshot, the tool shows that:

Quality is, however, still a major issue. According to the Coal Policy Tool's analysis institutions, including top players such as AXA, Crédit Agricole/Amundi, Crédit Mutuel and UniCredit have a robust coal phase-out policy (4). Most coal policies around the world remain too weak to even prevent further growth of the coal sector.

“The tool goes beyond identifying and comparing policies and enabling clients, media, financial institutions, and other stakeholders to navigate the coal policy jungle easily. Above all, it aims to ensure high-quality coal policies that effectively contribute to preventing climate chaos,” says Lucie Pinson, Founder and Executive Director of Reclaim Finance.

Pinson adds: “It is not enough to adopt a policy, what we need are good coal policies. French financial institutions were the first global players that adopted policies on coal, but these policies had to be amended many times before they became sufficiently robust to support a coal exit. We cannot afford to continue delaying real action. Addressing oil and gas is increasingly pressing; financial institutions need to now urgently progress to the level of the highest quality coal policies identified by our tool.”

What makes a coal policy strong?
To perfectly align with climate science, a coal policy needs to (a) cover the entire value chain, from mining to power through infrastructure; (b) tackle all financial services, including corporate and project financing, underwriting, and passive fund management, and (c) combine exclusion criteria and shareholder engagement to not only prevent the expansion of the coal sector but to also support its rapid phase-out.
Most banks and insurers still support new coal projects

216 top financial institutions (3) continue to lack any policy on coal, and most banks and insurers allow direct financing or insurance coverage for new coal projects. This is the case for the UK insurance market Lloyd’s, the US insurers AIG and Liberty Mutual, the Chinese bank ICBC and the Polish insurer PZU, which do not exclude any new coal projects. Many other financial institutions only exclude some of the worst projects. All geographies are concerned even if US, South Africa, and Asian financial players dominate the picture.

“Asian financial institutions have very poor coal policies, and Japanese insurers MS&AD, Sompo and Tokio Marine are definitely among the worst performers worldwide with absolutely no policy. The Covid-19 crisis shows that they can no longer ignore the calls of climate scientists and political leaders and must immediately end direct and indirect support towards new coal projects. Having zero tolerance for coal expansion is only the essential first step for any financial institution with environmental and sustainability commitments,” says Yuki Tanabe, the Program Director of Japan Center for a Sustainable Environment and Society (JACSES).

Existing policies are insufficient to mitigate the impacts of the coal sector
50 banks and insurers analysed in the tool still do not exclude any coal companies from financial services and just exclude financial services on the project level. And most exclusions of coal companies are based only on the relative share of coal in their activities. As revealed by the Global Coal Exit List, a database maintained by the NGO Urgewald, this approach leads to policies that let some of the biggest coal producers or coal plant developers off the hook.

“US asset managers tend to share an inadequate, dead-end approach to coal and climate. Whether it’s California's pension funds CalPERS and CalSTRS, or the biggest global asset manager BlackRock, we face policies that only tackle the mining side of the thermal coal industry and leave out all other coal-related activities. These financial giants deserve their failing grades for all criteria of the Coal Policy Tool; and their claims to be addressing the climate crisis and 'divesting from coal' ring hollow, when their coal policies keep ignoring the majority of the coal sector,” says Vanessa Warheit, Executive Director of Fossil Free California.

Most financial institutions fail addressing the need to exit coal
And last, but not least, the Coal Policy Tool shows that nearly everything remains to be done to support the closure of existing coal assets on time to align with climate science. Only an exceedingly small number of financial institutions have started to (a) commit to reducing their exposure to the coal sector to close to zero at the latest by 2030 in Europe and OECD countries and by 2040 in other countries at the latest and (b) adopt a strategy to meet this target. Many French financial groups are now requiring that their remaining clients adopt a coal phase-out plan by the end of 2021 and have pledged to drop clients who are unable to prove their ability to exit coal in a timely and orderly manner.

(3) The Coal Policy Tool covers:
More information on this methodology is available on this webpage.

It rates the policies of 214 financial institutions. The number of 214 is found once duplicates have been removed as insurers are graded both for their insurance as well as their investment policies.

(4) The 16 financial institutions with a robust coal phase-out policy are part of the following 10 financial groups: the top players AXA, Crédit Agricole/Amundi, Crédit Mutuel, and UniCredit along with 6 other French financial groups: AG2R La Mondiale, CNP Assurances, La Banque Postale Asset Management, MACIF, OFI Asset Management and SCOR in its capacity as an investor (the reinsurer SCOR has a minimal coal policy that only ends facultative coverage at project level).