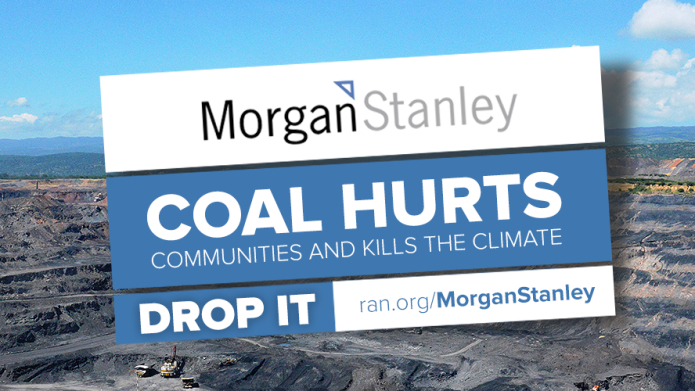 Today, Rainforest Action Network (RAN) announced that Morgan Stanley is the next major investment bank being targeted with a public campaign to demand that the bank commit to stop financing coal mining and coal-fired power.

Morgan Stanley continues to finance top producers of mountaintop removal coal, even as eleven of its competitors have committed to cut financing for the practice. The bank also financed $1.2 billion in 2014 for the largest operators of coal-fired power plants in the world such as RWE, Europe's largest single emitter of carbon dioxide.

For fifteen years, RAN has been holding the U.S. banking sector accountable for its environmental and human rights impacts, most recently campaigning against Bank of America's coal financing. Earlier this year, Bank of America and Credit Agricole both adopted new policies that took major steps away from financing coal. Now RAN is demanding Morgan Stanley and the rest of Wall Street meet and exceed these commitments by adopting comprehensive policies to end financing for coal mining and coal fired power.

In the lead up to the Paris climate conference in November, RAN has joined with over 120 other civil society groups partnered in the Paris Pledge that calls on the global banking sector to end financing for coal mining and coal-fired power. Global political and civil society leaders have called for a rapid transition away from fossil fuels. This year is becoming the make or break moment for global banks to decide how they will choose to invest in the future of energy.