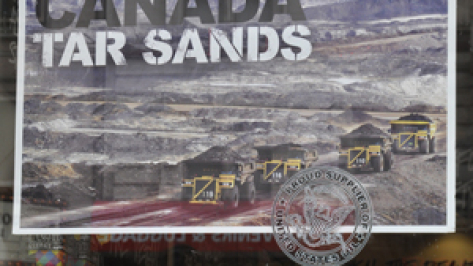 With approval of his $7 billion KeystoneXL pipeline uncertain,  TransCanada CEO Russ Girling is now saying the project has nothing to do with Canada's tar sands. But that's not the story he's telling investors.

In an interview reported today by Lauren Krugel of the Canadian Press, CEO Russ Girling said:

I don't believe that there's a causal link between the two... It will be developed responsibly, in my view, irrespective of whether we build a pipeline or not... That oil will go someplace, so I think this push to connect somehow the development of the keystone pipeline to the development in the oilsands is not valid.

The increase in WCSB crude oil exports from Alberta requires access to new markets, including the Gulf Coast. TCPL will continue to pursue additional opportunities to move crude oil from Alberta to U.S. markets.

So for its investors, increasing tar sands production "requires" the XL pipeline, but for the American public concerned about locking in dirty oil imports, the two have nothing to do with one another. Which do you believe?