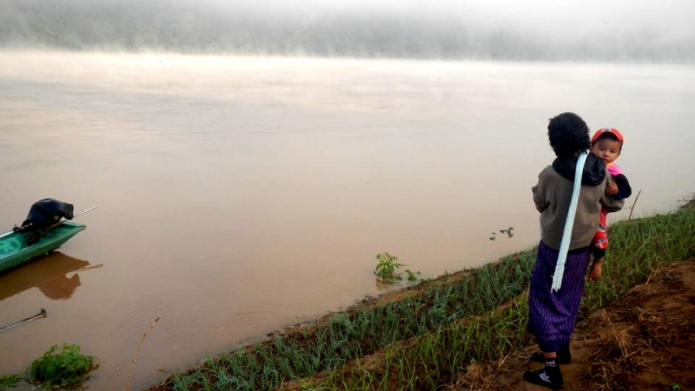 It is the middle of winter in the Mekong region; however, throughout December, floods have brought havoc to communities along the Mekong River. From the Chiang Saen District, Chiang Rai province in Northern Thailand downward, the water level in the Mekong has risen rapidly. The flooding was most intense along the Thailand-Lao border from the Golden Triangle toward Khong Chiam, Ubonratchathani. It is unprecedented to experience such flooding in the Mekong during wintertime.

Flooding was particularly bad in Chiang Saen District around Sob Kok, the delta plain in the Kok River where it meets the Mekong. In just one morning, the flooding damaged a large plantation owned by local villagers. Water from the Mekong River suddenly spilled over the banks causing levels of water tens of centimeters high to flood the area; corn, tobacco, bean and other vegetables vanished in the blink of an eye.

On December 19, The Vientiane Times reported that construction on the Xayaburi Dam was halted as the Mekong River rose, flooding the site. The Xayaburi Power Company - owner of the US$3.5 billion hydropower project - announced that "work on the dam's spillway had to stop when water flowed over the temporary barriers and lower parts of the area were submerged."

It was later reported that by the morning of December 20, the flooding had reached the Chiang Khan District, Loei. In the midst of the chilled winter morning, a grandmother, her nieces and nephews and local villagers in Ban Pha Baen were all stunned to see their plantations of green onion swept away, and they could do nothing to stop it.

Villagers in Tambon Hor Kham, Bueng Kan Province, also found that the Mekong's water level rose greatly. They were dismayed to see their vegetable plantations vanish right before their eyes including lettuce, morning glory, green onion, tomato, etc. Some villagers made an attempt to harvest the remaining produce; uprooting tomato shoots from one place to another as vegetables were swept away by the current.

According to Jintana Kesornsombat, a villager from Tambon Hor Kham, Bueng Kan, apart from the produce that was washed away, their fishing gear and boats which were tied up on the river banks were also damaged, as no one had expected such a flood to happen. "The floating water pumps belonging to villages and Tambon Administration Organizations were swept away in the Mekong as a result of the sudden high tide. The fishing boats suffered the same fate. The owners had to go out and look for their boats; otherwise they have to spend money to build new ones."

Jintana also said that during the couple of days of high tide, the villagers were unable to go out to catch fish and so had lost their source of income. "Villagers of most of the villages along the Mekong could not go out to fish. But since it has happened, we do not know who to complain to."

The unprecedented flooding has left many wondering - are the rising water levels a result of heavy rainfall released by the dams upstream in China?

During the winter, the water normally gets lower and becomes quite clear and clean. For hundreds of years during this time of year, local villagers would grow vegetables on the banks of the Mekong River that are then teeming with rich sediments. Therefore it took them by surprise that such destructive floods would happen during this time of year.

Nevertheless, this is not the first time that floods have left a path of destruction in the Mekong. In August 2008, massive floods caused the inundation of houses along the river in Chiang Khong District, Chiang Rai, even though there was no downpour in the local area. Many were convinced that as a result of heavy rains in the north and in China, the dams upstream reached their full capacity and had to discharge water. Still, no warnings had been made to notify the villagers downstream.

After the flooding in 2008, the Chiang Khong Conservation Group followed up with the Mekong River Commission (MRC) who replied that "a warning was already posted" on their website. This time, according to the MRC website, the water level in Chiang Saen increased by seven meters on 17 December. Two days later, the water had risen by another two meters.

According to the MRC's preliminary analysis, the severe flooding which hit the Mekong River in December was due to unusually high rainfall in northern Lao PDR, northeastern Burma and southern Yunnan province in China. A statement on the MRC website says that "there is no evidence at this time to suggest that the sudden peak was caused by release from dams in China."

However, such unprecedented flooding has lead to many questions about the management of dams along the Mekong, as well as the need for better warning systems in place for communities downstream. A pertinent question is how can communication among the six countries that share the Mekong River be improved regarding the management of the dams? When will this much-needed communication system be set up?

Five out of a series of eight dams have already been completed in the upper reach of the Mekong River in Yunnan, China. In addition, there are 11 more dams being planned in the lower reach of the river, the first of which will be the Xayaburi Dam in Laos. Currently under construction, 95% of the power generated by the Xayaburi Dam will be sold to Thailand. The second dam project - Don Sahong in Siphandone, Southern Laos - has been announced and preparations are being made prior to the start of construction.

The flooding water has made the small, marginalized people tearful, including the farmers growing vegetables and cotton, the fishers, and those growing rice along the Mekong. But who shall be held accountable for their agonies?

It is about time that a mechanism is developed to harness collaboration of people in the Mekong Basin based on the interest of local people.

The Precautionary Principle must be observed by the four member countries of MRC - Laos, Thailand, Cambodia and Vietnam - and an earnest effort must be made to demand responsibility from the watershed country, namely, China.

Data concerning the water level in the Mekong, precipitation, and the amount of water stored in the five dams in China should be publicized along with other related metrological data, which may affect the downstream area. It is time that this information is made transparent and accessible to the public, in order to provide checks and balances and accountability to ensure that warnings be made prior to such disasters taking place.