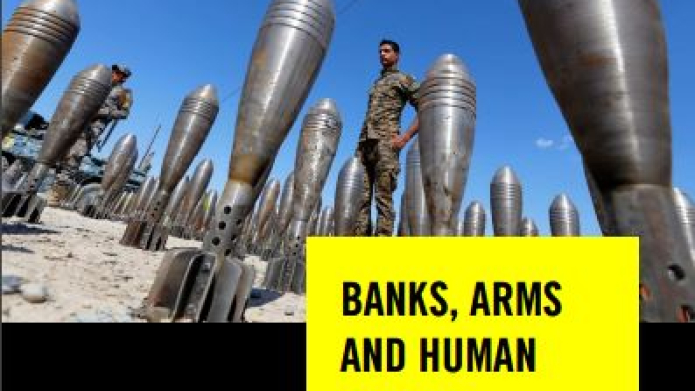 Inadequate and incomplete regulations and policies on financing the arms sector mean there is little to stop banks from financing and investing in the production and transfer of internationally banned weapons or arms used to commit serious human rights violations, according to an Amnesty International Luxembourg report launched today.

The report, Banks, arms and human rights violations, looks into the failures of the Luxembourg financial sector to put in place regulations, policies and procedures to effectively curb financial support for arms-related activities.

While Luxembourg's banks are in the spotlight, the report's findings and recommendations are also applicable to other countries in the European Union and elsewhere.

"Financing and investment are not neutral activities; they shape and facilitate economic activity, including in the arms sector. Banks and other financial institutions have a crucial role to play in the global efforts to stem the manufacture, transfer and use of internationally banned weapons, or the use of authorized conventional arms to commit serious human rights violations and crimes under international law," said David Pereira, President of Amnesty International Luxembourg.

International law strictly prohibits the manufacture, stockpiling, transfer and use, of certain types of arms, such as biological and chemical weapons, anti-personnel landmines and cluster munitions, which are regarded as illegal on a permanent basis and under any circumstances. It also prohibits the transfer and use of conventional arms for serious violations of international human rights and humanitarian law and crimes under international law, such as genocide, crimes against humanity and war crimes.

The report shows that, despite its international obligations, Luxembourg has failed to expressly prohibit all financial operations related to internationally banned weapons or conventional arms used in the commission of crimes under international law and serious human rights violations. The only exceptions have been curbs on financing activities relating to cluster munitions and arms destined for use in terrorism.

The research also shows a lack of transparency in the financial sector's policies and procedures on arms-related financial activities. Only two of seven top banks operating in the country contacted by Amnesty International Luxembourg provided the organization with a published policy on financing and investment in the arms sector.

"Insufficient domestic legislation is no excuse for the failure of Luxembourg's financial sector to adopt and implement adequate policies and procedures on the financing of the arms-sector," said David Pereira.

"This report has laid bare the lack of safeguards that would prevent banks from financing internationally banned weapons or arms used to commit or facilitate serious human rights violations or crimes under international law. We hope our findings will kick-start a robust debate among the financial sector, the authorities and the general public, in Luxembourg and abroad, on how to address this serious challenge and to ensure banks are not complicit in such violations," said Stan Brabant, Director of Amnesty International Luxembourg.

Amnesty International is calling on Luxembourg to strictly prohibit financial activities related to arms whose manufacture, stockpiling, transfer and use would violate international law. It should also take all appropriate measures to ensure the effective implementation and enforcement of this prohibition, and in particular define professional obligations applicable to banks and sanctions for non-compliance with such obligations.

Banks operating in Luxembourg must shore up their policies and procedures by:

The scope of the report was limited by the availability of information and by communications policies of the banks in the sample. Information was gathered in the course of interviews and also via couriers and email correspondence between February 2013 and March 2015.

Amnesty International's research did not attempt at this stage to corroborate or ascertain whether the information provided by the banks matches actual investment and financing practices.

Luxembourg was among the first countries to sign and ratify the Arms Trade Treaty, which entered into force on 24 December 2014. It is also a State Party to the Chemical Weapons Convention, Mine Ban Treaty and Convention on Cluster Munitions. However, Luxembourg has not yet implemented many key international arms control commitments.