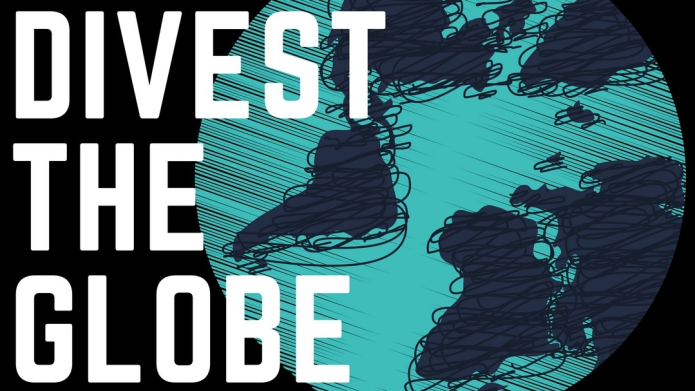 Today 91 banks will meet at the start of the annual meeting (Oct 23-25) of the Equator Principles Association (EPA) in Sao Paulo, Brazil. At this time, the indigenous-led divestment campaign, Mazaska Talks, is leading a global 3-day protest known as #DivestTheGlobe. On Monday, there will be actions in at least 44 cities in the United States and Canada. On Tuesday and Wednesday, there will be actions in Africa, Europe and Asia.

The protests are designed to galvanize people to divest their households, institutions, and cities from banks that finance desecration projects, such as tar sands pipelines. The protests are being supported by many national organizations such as 350.org, Rainforest Action Network, Greenpeace and the Sierra Club, some of whom have added their names to a letter promising to boycott the banks until they stop investing in tar sands.

As part of the protests, Mazaska Talks urges banks to follow the example of BNP Paribas, the second largest bank in Europe, which last week promised to cease all funding of companies whose primary business is tar sands, fracking, or Arctic drilling.

In conjunction with BankTrack’s campaign, the protests draw attention to the failure of the Equator Principles to align with the Paris Agreement and uphold internationally-recognized indigenous rights to Free, Prior, and Informed Consent (FPIC) in the case of the Dakota Access Pipeline, Line 3, Keystone XL, Trans Mountain, and other fossil fuel projects around the world.

The demonstrations come two months after the Energy Transfer family of companies sued Greenpeace and BankTrack for supporting the #NoDAPL movement and calling on people to divest from banks financing the Dakota Access Pipeline. Energy Transfer received project-level financing for the project by assuring banks they had consulted with the tribe, thus aligning the project with the Equator Principles. Consultation is merely an exchange of information, not consent. Indigenous people have a right to consent, recognized in the U.N. Declaration on the Rights of Indigenous People.

Energy Transfer inadvertently admitted the effectiveness of #DefundDAPL divestment campaigns in their SLAPP suit, pointing out, “the damage to Plaintiffs’ relationships with the capital markets has been substantial, impairing access to financing and increasing their cost of capital and ability to fund future projects at economical rates."

Since the Standing Rock Tribe passed a resolution ending business with Wells Fargo in October 2016, more than a dozen cities have taken some step towards moving their money out of Wall Street, affecting dozens of billions of dollars in annual cash flow.

Divest the Globe: Quotes and Support

“Big oil, multinational corporations and their financial backers are not persuaded by moral and environmental arguments. Nor do they even care for following the rule of law, as we have witnessed violation after violation of Tribal Nations’ treaty rights. They’re capitalist and they are persuaded by one thing, money. So Indigenous Nations and their allies are rising up to create a future with clean water and respect for human rights,” Matt Remle, co-Founder of Mazaska Talks

“Until these banks start investing in the future of Mother Earth, we will bring attention to the injustice they contribute to and we will continue to use divestment as a tool to help end these atrocities,” Rachel Heaton, co-Founder of Mazaska Talks

“Making the transition from fossil fuels to green power is no longer a matter of financial capital, but of political will. These banks have learned nothing from Standing Rock or the Great Recession, so it’s up to us to make our own public banks and finance our own communities,” Jackie Fielder, Organizer with Mazaska Talks

“In order to create a better future for our next generation, we must encourage the banks who hold the worlds funds to divest from fossil fuels which destroy the environment. We must stand up and empower ourselves to divest, because divestment is empowerment,” Ladonna Brave Bull Allard, Founder of Sacred Stone Village

“We have the right to Free Prior and Informed Consent of projects impacting our survival, our cultures and our futures. We want the global financial community to realize that investing in projects that harm us is really investing in death, genocide, racism and does have a direct effect on not only us on the frontlines but every person on this planet. They have a moral obligation to listen to us, to invest in sustainable energy projects which bring lasting growth and jobs not built on dying industries like coal and oil,” Joye Braun, Community Organizer with Indigenous Environmental Network

“Anyone with a brain, not to mention a conscience, should put their money in a bank that actually thinks the planet has a future, instead of one that scrambles for the shortest of short term gains at any cost,” Bill McKibben, Founder of 350.org

"Wells Fargo and other big banks that finance dirty fossil fuel projects should take notice: this movement isn't going anywhere," said Sierra Club Beyond Dirty Fuels campaign director Kelly Martin. "Communities across the country are calling on their local governments and institutions to divest from banks that support fossil fuels, and thousands of people have already committed to moving their own money out of these banks. We will not back down until banks commit to investing in a future that benefits our communities, our economies, and our health."

“Responsible banks don’t put their money into projects that bulldoze Indigenous rights, jeopardize clean water, threaten wildlife and destabilize our climate. As the world's biggest banks meet to discuss Indigenous rights in Brazil, we're standing with Mazaska Talks and Indigenous leaders everywhere who are resisting destructive fossil fuel projects. Contested oil pipelines pose too many risks and face too many hurdles to succeed long-term. Already, some of the world’s biggest banks such as BNP Paribas, ING, and US Bank are stepping away from these projects. It’s time for the rest of the financial sector to follow suit,” Alex Speers-Roesch, Finance campaigner, Greenpeace Canada

“Major fossil fuel infrastructure projects like the Teck Resources Frontier Mine, KXL, Kinder Morgan and Line 3 pipelines require outside funding to be completed, giving banks an outsized role in shaping our collective climate future,” said Ruth Breech with Rainforest Action Network. “For too long financial institutions have escaped accountability for the real world consequences of their investments, the time for that impunity has come to an end.”

“Ever since the City of Seattle broke ties with Wells Fargo, it’s been crystal clear that the banks stand to lose billions of dollars because of their funding of projects that both abuse the rights of Indigenous communities and are a disaster for our climate,” said 350 Seattle organizer Alec Connon

"Holding big banks accountable by closing accounts is addressing a root cause of outdated and dangerous fossil fuel infrastructure development and egregious human rights violations," said Vanessa Green, Director of DivestInvest Individual. "People, public institutions and private businesses all moving money means real impact on banks and the broader finance industry, as evidenced by updated or new standards, policies, products and services. As finance industry leaders respond, the laggards are exposed and will be the biggest losers."

“We live in extraordinary times that require bold decisions. Huge parts of the Caribbean and the South coast of the US are in ruin after three hurricanes in a row, Vietnam is dealing with immense floods and Ireland has been hit by a tropical hurricane. Business as usual, that is for the banks to stick to the outdated 2013 version of the Equator Principles in a Post-Paris-Agreement world, cannot be an option for how they intend to deal with those risks,” said Johan Frijns, BankTrack director