More information on the project can be found here 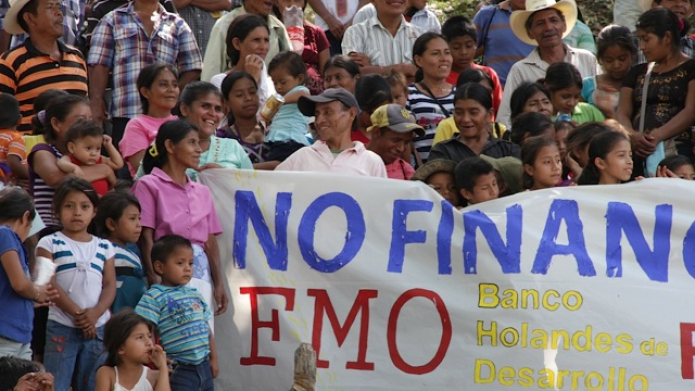 On April 1st 2014, members of the Indigenous Council, the Elders Council, Patronato (Community Council), and other members of the Indigenous Lenca community of La Tejera, Rio Blanco, Intibuca in Honduras issued a joint open letter to Dutch development bank FMO, demanding that the bank will not provide support to the Agua Zarca Hydroelectric Project.

The letter, issued at a festive event celebrating a year of indigenous resistance against the project, states that the planned dam project will destroy the indigenous territory where the communities for centuries have grown ‘corn, beans, coffee, yucca, bananas, sugar cane, avocados, pineapple, oranges, lemons, and other crops’. The letter further states that DESA (Desarrollos Energéticos S.A., the project sponsor), will be ‘destroying the natural course of our sacred Gualcarque River, which is the source of life and spirituality of the Lenca people’ and that therefore they will ‘defend the land and the Gualcarque River to be able to survive’.

The Agua Zarca dam, with a planned production capacity of 21,7 MW, is to be constructed in the Rio Blanco Lenca Indigenous territory, but has been heavily contested ever since its inception in 2008. Apart from FMO, which provides a 15 million US$ loan, DESA is to receive support from Finnfund of Finland and the Central American Bank for Economic Integration, CABEI. Preparatory work is under way but until now no construction has taken place on the dam itself.