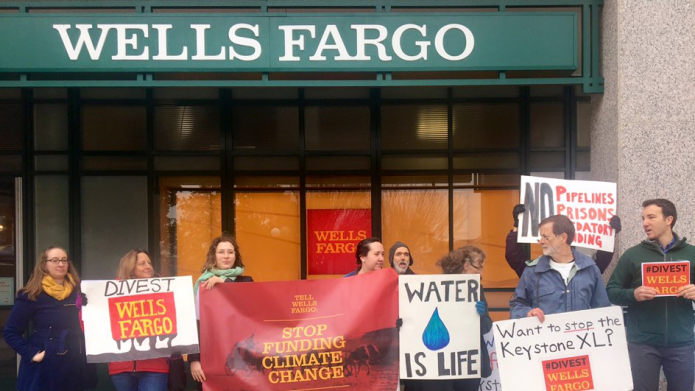 Wells Fargo has released an update to its environmental policy ruling out funding for oil and gas projects in the Arctic region, including the Arctic National Wildlife Refuge. The update does not make improvements to the bank’s other oil and gas financing policies. The 2019 Banking on Climate Change report lists Wells Fargo as the world’s top banker of fracked oil and gas, and the second largest funder of fossil fuels overall.

The release of this change to the bank’s policy comes in the wake of similar announcements by Goldman Sachs and JPMorgan Chase, as well as more than a dozen global banks. Over the last two years, leaders from the Gwich’in Steering Committee and the Sierra Club have met with representatives from major banks to discuss the threats fossil fuel operations pose to the Arctic Refuge and why action by the financial industry is necessary. In the last three months, three of the top six banks in the United States have prohibited funding Arctic drilling.

“Wells Fargo’s decision to rule out funding for Arctic drilling is clear evidence that investing in the destruction of the Arctic Refuge would be toxic to any company involved,” said Sierra Club campaign representative Ben Cushing. “The Trump administration still hasn’t given up on trying to sell off the Arctic Refuge for drilling, but oil companies should pay close attention to the events of the past few months and think twice before bidding.”

“For years, we have been speaking out about the need to keep drill rigs out of our sacred lands in the Arctic Refuge, and it’s amazing that a growing number of major banks are listening,” said Gwich’in Steering Committee Executive Director Bernadette Demientieff. “The Arctic Refuge is critical to our people’s food security and way of life. Our human rights will not be dismissed. The fight to protect this place is far from over, and we will continue to hold accountable any bank, oil company, or politician that seeks to benefit from its destruction.”

“I want to say Mahsi Choo (thank you very much) to the banks that are stepping back from funding Arctic Refuge drilling,” said Kaila Druck, Gwich’in Youth Councilmember. “We fight for not only our land but for our animals and our people. It makes me beyond happy that our voices are being heard and we are making a change. As an Indigenous youth, I want to have a place in our homelands with healthy animals, clean water, and pristine lands, just as our ancestors left it before us. Mahsi choo!”

About the Sierra Club

The Sierra Club is America’s largest and most influential grassroots environmental organization, with more than 3.5 million members and supporters. In addition to protecting every person's right to get outdoors and access the healing power of nature, the Sierra Club works to promote clean energy, safeguard the health of our communities, protect wildlife, and preserve our remaining wild places through grassroots activism, public education, lobbying, and legal action. For more information, visit www.sierraclub.org.