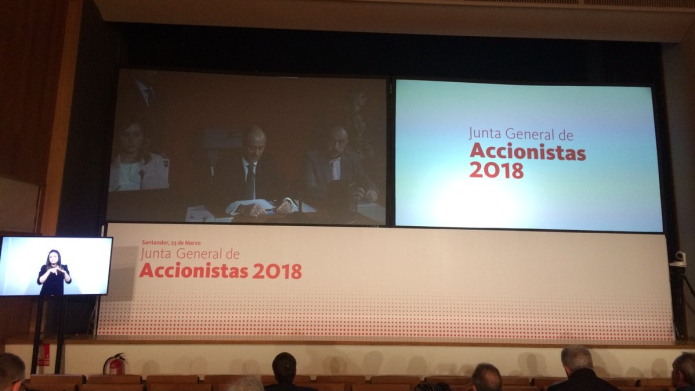 The International Institute for Law and the Environment (IIDMA) today challenged the climate policy of Banco Santander at its annual shareholders meeting (AGM), in collaboration with BankTrack, ShareAction and the "Development YES - Open-Pit Mines NO" Foundation. In particular, the groups called for an end to the bank’s finance for projects and companies in the coal sector, both directly and through the Polish bank BZ WBK, in which Santander is the main shareholder.

Despite its recent efforts, Santander’s policy is still far behind most of its European competitors, including BNP Paribas, ING and BBVA. Last February, the latter published its Pledge 2025, with a commitment to divest from coal, including a general ban of direct financing to new mines and coal power plants worldwide. European NGOs have asked Santander to make a similar commitment, in line with the bank’s stated ambition to align with the Paris Agreement objectives to fight against climate change.

Last year, the Task Force on Climate-related Financial Disclosures, led by Michael Bloomberg, and the EU High Level Expert Group on Sustainable Finance, recommended the banking sector take steps towards greater transparency on its climate impacts. It is imperative for banks to support the transition towards a low-carbon economy and to apply rigorous climate-risk assessment i within their business strategies. In addition, they must provide detailed information to investors about their response to climate-related risks. .

In this context, European NGOs have questioned the alignment of Santander's policies - including its support for coal - with the objectives of the Paris Agreement, and have stressed the need for the bank to urgently ensure its financing policies are compatible with the Agreement’s objective of limiting global warming to below 1.5 degrees..

IIDMA has asked the following questions regarding its climate and energy policies:

In addition, IIDMA highlighted that Santander is the main shareholder of the Polish bank BZ WBK, which finances companies whose main business is coal, most of which plan on opening new coal mines and coal plants in the country. Therefore, to be consistent with its fight against climate change, Banco Santander should apply rigorous climate risk assessment for all the corporate activities within its group:

Quotes by the organisations

Carlota Ruiz-Bautista, lawyer at IIDMA, commented: "According to the last UN Emissions Gap report, , there is no room for further high-carbon infrastructure lock-ins if we are to meet international emissions targets. Continuing to finance the construction of new projects in high-carbon sectors will contribute to the increase of global temperatures. Therefore, Banco Santander must include in its business strategy coherent commitments to be aligned with the Paris Agreement objectives, as BBVA has done. This includes providing no further financing to coal”.

Yann Louvel, climate campaigner at BankTrack, commented: “It took Santander two years to respond to the climate challenges set by the Paris Agreement, yet the new sector policies which the bank published last month are a major disappointment. If Santander wants to be taken seriously on climate, then it will have to urgently deal with the biggest loopholes in its policies. And, for starters, that means ending its direct financing for new coal mines and new coal plants worldwide, as well as for new oil projects in tar sands or in the Arctic, all measures which were adopted last month by its Spanish rival BBVA.”

Kuba Gogolewski, finance campaigner with Polish Foundation "Development YES - Open-Pit Mines NO, commented: "The times when Banco Santander’s Polish subsidiary BZ WBK could lend to Polish coal companies without anybody noticing are over. Lending to utilities planning new lignite open-pit mines and new coal power plants is clearly at odds with the Paris Agreement that Banco Santander wants to stay aligned with. The bank must commit to stopping all lending to new coal infrastructure and companies as defined by the Global Coal Exit List by COP24 in Poland or prepare to be the target of a public campaign in 2019."

Sonia Hierzig, banking project manager at ShareAction, commented: “Santander and other large banks are increasingly facing shareholder scrutiny on the ways in which they manage climate-related risks and opportunities. Last year over 100 investors with combined assets under management of nearly USD 2 trillion wrote to 62 global banks to request better climate-related disclosures. This, as well as growing pressure from regulators and civil society, has led many European banks to take increasingly bold action on climate change. For example, fellow Spanish bank BBVA has recently published a new and comprehensive climate strategy, which restricts its financing of some of the most polluting industries. Shareholders will be keeping a close eye on whether Santander will be able to catch up with BBVA and other European peers.”

Banco Santander avoided any firm commitment towards the fight against climate change, announcing no changes on its coal policy, which continues to be "confidential" in terms of the exclusion thresholds applied for new coal plants. This represents an important problem as Santander could risk remaining with stranded assets. About its climate policy, Ana Patricia Botín, CEO of Banco Santander, stated : "We have to bear in mind that not all countries progress at the same time. What is important is that they move in the same direction". However, continuing to finance new coal plants and mines represents, under no condition, progress towards the right direction.