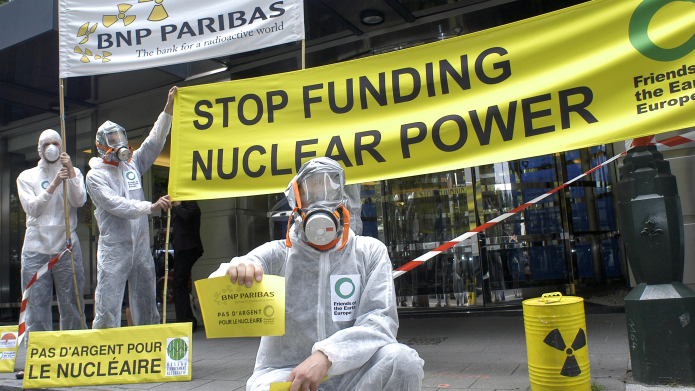 On June 5, World Environment Day, environmental organizations in 15 countries protested against the French bank BNP Paribas, because of its involvement in the Belene Nuclear Power Project (NPP) in Bulgaria. BNP Paribas is providing a 250 Million Euro loan for the construction of two nuclear reactors of Russian design in Belene. It is the first western bank to become involved in this controversial project.  Environmental NGOs prosteded in Vienna, Paris, Sofia, Bucharest, Rome, Budapest, Amsterdam, Brussels and other European capitals. They picketed BNP Paribas’ offices with leaflets, banners and placards asking the bank to leave the project.
The Belene Project is situated in an earthquake area in Northern Bulgaria, close to the Romanian border. During the last large earthquake in 1977, 120 people died just 14 km from the project site. The plan to build an NPP here goes back to Soviet times. Belene was conceived in the early 1980s and construction began in 1985, shortly before the catastrophe of Chernobyl took place. Popular protests and a study by the Bulgarian Academy of Sciences, which warned against erecting nuclear reactors in this area, led to a halt in construction and in the 1990s the project was officially scrapped. The Bulgarian Cabinet deemed Belene to be “technically unsafe and economically not viable”.

In 2004, however, the Bulgarian Government decided to re-start the plan to build two nuclear reactors in Belene. And in 2006, it awarded a construction contract to the Russian firm AtomStroyExport, which put forward a bid in cooperation with the French-German company Areva NP. The reactors planned in Belene are of a new Russian design, for which no safety assessment exists and which has never before been built in Europe. “We do not want to become a testing ground for the Russian nuclear industry’s projects”, says Petko Kovatchev from BeleNE!, the Bulgarian NGO Coalition opposing the NPP.

But not only NGOs are critical of the project. Until today, eleven international banks have refused to finance Belene. Deutsche Bank, Commerzbank, UniCredit, Société Géneral, Citibank, Credit Suisse and others turned down the project as too risky and too controversial. “BNP Paribas, however, seems to have less scruples than other banks”, says Sebastian Godinot, from the French organization Les Amis de la Terre. “Financing a project like Belene means risking a second Chernobyl”.

“If BNP Paribas goes ahead with financing Belene, they will see enormous backlash”, says Heffa Schücking of the German NGO Urgewald. “BNP Paribas reaps the bulk of its profits in Europe, where the majority of the population is opposed to an expansion of nuclear power. For a bank, which is trying to expand its retail business and to increase its share of institutional investors, financing Belene is a bad move”, she adds.
“Building an unknown type of nuclear reactor in an earthquake area is a recipe for disaster and puts the people of Bulgaria, Romania, Macedonia, Serbia and other countries in the region at great risk”, says Jan Haverkamp of Greenpeace. Several months ago, over 160 NGOs from 28 countries wrote to BNP Paribas and expressed their concerns about Belene. “The bank did not even see fit to answer this letter”, states Haverkamp.