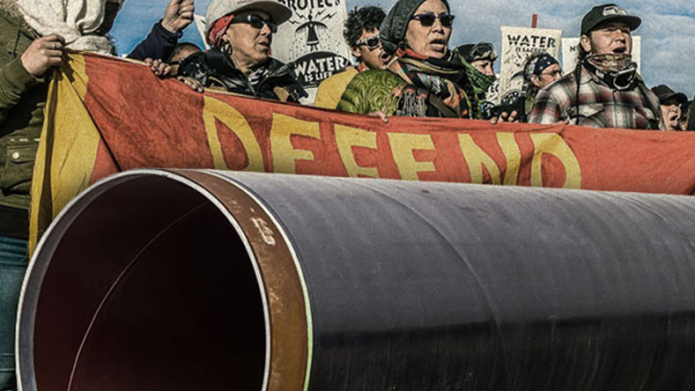 65 Environmental, human rights and Indigenous Peoples’ organisations today sent an open letter to the Steering Committee of the Equator Principles Association (EPA), calling for new and much stronger commitments to be made by its 91 member banks on combating climate change and respecting Indigenous Peoples’ rights and territories.

The letter calls for the Equator Principles to include an explicit commitment to the Paris Agreement goal of limiting global temperature rise to well below 2 degrees and strive for 1.5 degrees, and as such rule out finance under the Principles for any new fossil fuel extraction, transportation and power projects. The letter also calls for a clear commitment from all Equator Banks to fully respect the internationally recognised rights of Indigenous Peoples anywhere in the world to withhold their consent for projects on their traditional territories, and to rule out financing any projects that violate these rights.

The call comes two months ahead of the next Annual Meeting of the EPA, on October 23 in São Paulo, Brazil. The letter calls upon Equator Banks to decide in Brazil on a full revision process for the Principles, involving external stakeholders, so new commitments on climate change and Indigenous Peoples’ rights can be incorporated in a new set of Principles  in due time. Agreeing on such a revision process would also be in line with a call made earlier this year by ten Equator Banks which proposed a number of changes to the Principles that cannot be accommodated within the current version.

The Equator Principles are a set of voluntary standards signed by 91 financial institutions, mostly private sector banks, to govern their finance for large infrastructure projects. They are supposed to strengthen risk management by ensuring that projects being financed are ‘developed in a manner that is socially responsible and reflects sound environmental management practices’. Adopting banks also ‘recognise the importance of climate change, biodiversity, and human rights, and believe negative impacts on project-affected ecosystems, communities, and the climate should be avoided where possible.’

But the NGO open letter calls attention to a series of ‘disaster projects’ that continue to be financed, supposedly in full compliance with the Equator Principles, including the Dakota Access Pipeline in the United States, last year resisted by a historic Native American-led protest camp at Standing Rock, and the Agua Zarca hydroelectric project in Honduras, which led to several assassinations, including the murder of Indigenous human rights defender Berta Cáceres in her home last year for leading Indigenous resistance to the project.

The open letter emphasises that all undersigning organisations place great importance on the Principles, but also warns that “a failure of the Brazil meeting to deliver on these matters will result in a fatal blow to the reputation of the Principles as a global sustainability ‘gold standard’, and in fact position your initiative as one that is actively accommodating the financing of projects that lead to a further deepening of the climate crisis and a deterioration of the plight of Indigenous Peoples”.

The initiative group behind the letter, including BankTrack, Greenpeace, Rainforest Action Network, Sierra Club, Amazon Watch, Mazaska Talks, Market Forces and Divest-Invest, amongst others, today also launched the campaign website, equatorbanksact.org, which lists examples of ‘Equator compliant disaster projects’, and presents a ‘Global Call to Action’ for organisations and individuals to support. The initiative group pledges to increase pressure on the Equator Banks to deliver on this Call right until the October Annual Meeting.

Johan Frijns, Director of BankTrack, the Netherlands based organisation that took the initiative for the letter, said: “The current Equator Principles date from 2013, before the world agreed in Paris that strong global action is needed to stop catastrophic climate change from further unfolding. The devastating floods in Bangladesh and Texas today show once more that there is no time to lose and that the Equator Principles, a risk management tool after all, must urgently be updated to effectively contribute to managing the biggest risk of all, both to the business of banks and to the planet as a whole. Equator Bank financing of climate disaster projects must end.”

Leila Salazar-López, Executive Director of Amazon Watch, said: “From Standing Rock to the Amazon, Indigenous communities and allies are taking their demands for land rights, sacred site preservation, and environmental protection to the halls of financial power. This campaign is part of the growing movement calling on the financial industry to recognize that our future lies not in short-term profits but in the protection of rights, the environment, the climate, and bold investments in renewable energy. It is high time that the Equator Banks head this call.”

Lindsey Allen, Executive Director of Rainforest Action Network, said: “The Equator Principles recognize bank responsibility for the impacts of projects financed, but in reality they're markedly ineffective in safeguarding the environment and protecting human rights. Banks are still funding projects left and right that exacerbate our world's reliance on extreme fossil fuels — from bankrolling the Dakota Access Pipeline, which violated the right to Free, Prior and Informed Consent from Indigenous Peoples, to the recent financing of Kinder Morgan’s Trans Mountain Pipeline. These well-financed projects devastate our climate, and infringe on the rights of Indigenous Peoples. The Equator Principles must be strengthened, or they will be recognized as nothing more than window dressing.”

Matt Remle and Rachel Heaton, Co-Founders of Mazaska Talks, said: “The Equator Principles allowed banks to get away with underwriting human rights violations and the desecration of our one and only planet, Unci Maka (Mother Earth). We must bring these banks to heel and continue to divest ourselves and our communities from these heartless banks.”

Nicole Ghio, Senior Campaign Representative with the Sierra Club, said: “It is more evident than ever that the Equator Principles have become woefully out of date, and ensuring that projects are socially and environmentally responsible goes beyond simply signing a piece of paper. While the world came together to endorse the Paris Agreement, and groups like the Task Force on Climate-related Financial Disclosures work to address the financial risk of catastrophic climate disruption, the Equator Principles continue to contain loopholes for banks to finance projects that threaten communities and wreak havoc on the environment. Equator Bank support for the Dakota Access Pipeline is just the latest example of the Principles failing to protect Indigenous rights. The Equator Principles must be updated to not only reflect the consensus around the climate crisis but to respect the rights and sovereignty of Indigenous peoples.”

Tara Houska, National Campaigns Director of Honor the Earth, said: “The resistance against fossil fuel expansion and towards just transition to a green economy is growing around the world. The banks that fund destruction and oppression of Indigenous peoples and other at-risk demographics are in the limelight, where they will remain if these banks continue to pay lip service through well-meaning, ineffective policies like the Equator Principles. We want action, not words.”

Michelle Cook Diné, J.D, SJD Candidate, Indigenous Peoples Law and Policy Program, said: "Indigenous peoples are calling for justice, accountability, and meaningful remedy for human rights abuses by extractive industries funded and or facilitated by banks and financial institutions in the territories they traditionally use or occupy. They are demanding that banks make real their commitments to the Equator Principles by highlighting the on the ground efficacy of those Principles in the lives of Indigenous peoples. The time for banks to be accountable to Indigenous peoples and the world community for human rights abuses they facilitate is long over-due. This is an opportunity for the Equator Association to take notice, listen, and change the Principles."

Julien Vincent, Executive Director of Market Forces, said: “Despite committing to support the goal of holding global warming to less than two degrees, Australia’s banks have continued to finance the expansion of the fossil fuel sector, helping to increase the world’s output of greenhouse pollution by billions of tonnes. Banks need to realise that they play a key role in determining whether or not we keep a lid on global warming and change their policies and practices to avoid runaway climate change.”

The open letter, including a list of signatories can be found here.

The letter of ten Equator Banks to the Equator Principles Association can be found here.