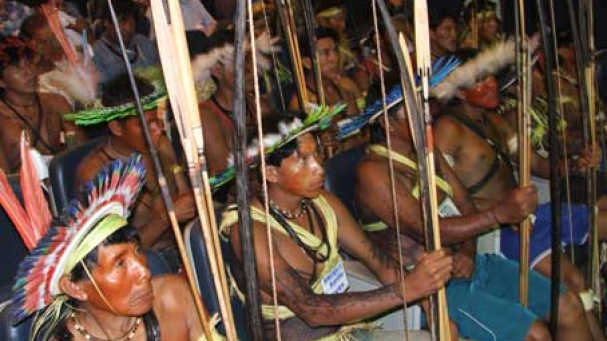 Indigenous people in event to public discuss the project.

Environmental organizations have condemned the Brazilian government´s approval of a license for construction of Santo Antonio Dam, on the Madeira River in the Brazilian Amazon. The groups say that Brazil´s environmental protection service, Ibama, has caved in to political interests, ignoring the advice of its own technical staff in licensing the dam, and approving a mitigation plan which will do little to decrease its impacts.

Santo Antonio Dam would be the first of two dams to be built on the Madeira, the Amazon´s principal tributary. Environmental impact assessments predict serious impacts on the region´s biodiversity, and on river bank communities, including indigenous tribes living close to the reservoir area.

Glenn Switkes, of International Rivers, says "Environment Minister Carlos Minc´s decision to license the dam demonstrates his mandate is to accelerate the building of large-scale, high-impact projects in the heart of Amazonia. The fact that construction will be permitted without a definitive solution in place for fish passage threatens the livelihoods of thousands of river bank dwellers who depend on high-value fish species for their income".

Ibama required the consortium building the dam to submit an impact mitigation plan to demonstrate how they would comply with 33 conditions that the agency placed on the project. But independent analyses show that the mitigation plans include vague promises that are restricted to monitoring and further studies, rather than concrete measures to reduce the project's impacts. Decisions regarding the project´s social and environmental viability, which should have been analyzed during the preliminary licensing phase, in July 2007, have been in effect deferred until later, when it will be too late to avoid the project´s most serious effects.

Despite the fact that the construction license was issued only today, communities living close to the planned worksite have already been pressured to leave their homes, and accept inadequate compensation terms.

Iremar Ferreira, Executive Director of the Living Madeira Institute in Porto Velho says "This is a serious violation of the human rights of the displaced people. The only assistance they are being given is a small payment for their land. As a result, they will have to find a way to survive on abandoned cattle ranches, miles from the banks of the Madeira where their families have lived for generations.

Friends of the Earth, Brazilian Amazon says the granting of the construction license under these conditions will mean additional challenges to the project in the courts, and predicts further project delays, meaning added risks for investors and financiers of the project.

Gustavo Pimentel of Friends of the Earth says "The project violates the Equator Principles (on project finance), and therefore should not be financed by banks such as Bradesco, Banco do Brasil, Itaú, and Unibanco that have committed to the principles. Brazilian banks have an opportunity to prove that they are truly committed to sustainability by refusing to finance the destruction of the Amazon".