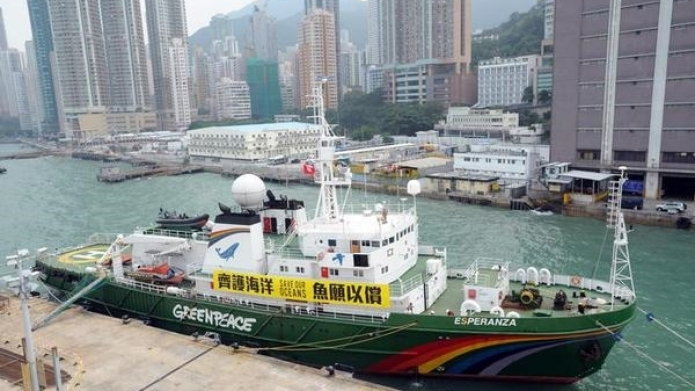 The Chinese government has criticized as "misleading" a bungled initial public offering (IPO) that Deutsche Bank organised for one of China's largest tuna longline companies. The IPO has been suspended after Greenpeace exposed serious material omissions in China Tuna Industry Group's (CTI) preliminary prospectus to raise US$150 million, which was to be used to expand its fishing of vulnerable tuna species in the Pacific Ocean.

Greenpeace has written to Deutsche Bank , seeking clarification about its relationship with CTI, how it allowed the deal to go ahead in the first place, and asking the bank to withdraw from the IPO.

"Overfishing is business suicide for fishing companies, and a risk to investors. This scandal is a warning to financial institutions like Deutsche Bank, and investors in the fishing sector not to risk their reputations by dealing with companies that pillage our oceans. We wait to hear how Deutsche Bank intends to fix its social and environmental risk framework, a framework that should have prevented the IPO application from happening in the first place," said Elsa Lee, Senior Business Advisor at Greenpeace East Asia.

CTI hoped to use the money from the share offering to expand its longline fleet targeting bigeye tuna in the Pacific Ocean, but the IPO was postponed after Greenpeace exposed significant investor risk to the Hong Kong Stock Exchange. The draft prospectus understated the supply risk to investors, citing an outdated stock assessment for the now overfished bigeye tuna and revealing a business plan based on ignoring catch limits and penalties set by regional fisheries management organisations (RFMOs).

In a reply letter to Greenpeace, dated 30 September, China's Bureau of Fisheries confirmed it is conducting an internal investigation into CTI. The Bureau of Fisheries stated that, "The (draft) prospectus has gravely misled investors and the international community, and caused a tremendous negative impact." Threatening further action, the Bureau states "...the company's actions are already in violation of relevant laws and regulations." The Bureau has called on Dalian Ocean Fishing Company Ltd, the fishing subsidiary of CTI, to halt any attempts to list its offshore fisheries businesses, and to account to the Bureau on how it is handing the situation.

"Greenpeace welcomes this strong stand from the Chinese government. It is now crucial that we prevent deals that fuel any increased overfishing in distant waters from happening. As a first step, we urge the financial sector, including Deutsche Bank, to remove itself from unsustainable business such as CTI," said Lee.

Much of the global longline fleet operates out of control and out of sight. Over 5000 vessels roam the oceans with little controls to ensure they are fishing legally, sustainably, or ethically. There is huge bycatch of endangered marine animals as well as serious overfishing, and depletion of species such as yellowfin, albacore, bluefin, and bigeye - the species primarily fished by CTI.

1.    The letter Greenpeace sent to Deutsche Bank can be provided upon request.

2.    Excerpts from the response from China Ministry of Agriculture Bureau of Fisheries to Greenpeace. A translation of the response can be provided upon request.