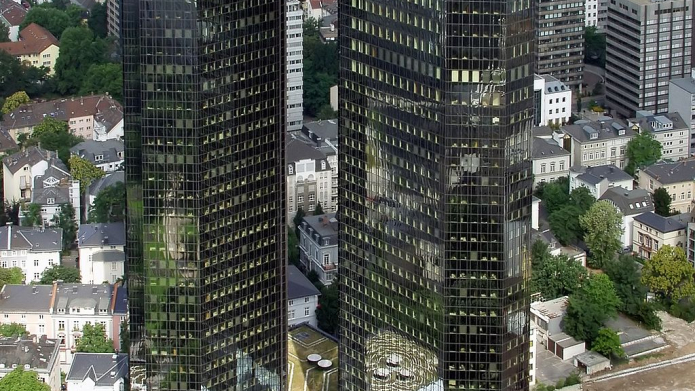 On the occasion of the Annual General Meeting of Deutsche Bank today, the bank has been criticised by an alliance of environmental and human rights organisations. This is due to a complete lack of implementation of its much-vaunted culture change.

Most striking is the bank's completely ignorant behaviour regarding climate protection and human rights. Deutsche Bank has for several years been one of the largest funders of global climate offenders and, in 2014, was the tenth largest financer of coal in the world, according to the 'Banking on Coal' report .

"Deutsche Bank has continuously made claims that it seeks to protect the climate. But in reality, it is helping to speed up climate change and appears unwilling to change even during the Year of Climate 2015," said Katrin Ganswindt of Urgewald.  "No client is too controversial and no method too devastating for Deutsche Bank."

Deutsche Bank still maintains business relations with corporations like Alpha Natural Resources or Metinvest that mine coal using the mountaintop removal (MTR) method. As a result of this process entire mountaintops in the American Appalachian Mountains are blown up to get to the underlying coal. The method pollutes drinking water and air and leads to severe health impacts.

Paul Corbit Brown, of Keepers of the Mountains from the Appalachian Mountains, commented: "Dozens of banks state that they will no longer finance corporations specialising in mountaintop removal, including Barclays, BNP Paribas, RBS, Société Générale, JP Morgan Chase, Wells Fargo and ING. But Deutsche Bank keeps examining and re-examining the situation related to divestment and cannot ultimately make up its mind. It's about time to put the cards on the table and get rid of its MTR clients".

At the end of January this year, Deutsche Bank, along with other banks, facilitated the sale of a 10% stake in the coal corporation Coal India Limited. This company has had serious and sustained negative publicity related to numerous environmental offences, such as operating coal mines without environmental permits, serious work accidents, and disastrous living conditions in coal-mining areas. But the criticisms related to this client have fallen on deaf ears at Deutsche Bank.

Environmentalists have another of the banks clients in sight: the Indian National Thermal Power Corporation (NTPC). NTPC plans to construct the Rampal coal-fired power plant  in Bangladesh in a joint venture with the Bangladesh Power Development Board.

Rampal will be constructed only 14 kilometres away from sensitive mangrove forests, which have a UNESCO Natural World Heritage listing due to their unique characteristics. UNESCO and environmental experts fear the power plant construction will cause massive damage to the mangrove forests.

Maha Mirza, of the "Save the Sundarbans"project in Bangladesh, said: "Some international investors such as the Norwegian Pension Fund Global have removed NTPC from their portfolio due to the environmental dangers posed by the power plant construction. At the same time the operators are reaching out to investors and fiscal sponsors for the Rampal project. We want a clear statement from Deutsche Bank stating that they will stay out of this business."

"The commitment by Deutsche Bank to the UN Guiding Principles on Business and Human Rights can be seen as a farce," states Thomas Küchenmeister of the NGO Facing Finance. He deplores the bank's ignorance regarding human rights: "If it is true that respecting human rights is of fundamental concern for Deutsche Bank, then why does it continue to support business relationships with some of the most disgraceful arms companies like Heckler & Koch and Rheinmetall?"

Other clients of this scandalous sector prone to corruption are nuclear weapons producing BAE Systems, Boeing and Airbus Group as well as cluster munition producers ATK. All in all, 13 companies producing nuclear weapons were funded with capital through credits and bonds.

2. NGO letter on the issue of Rampal to Deutsche Bank (German).