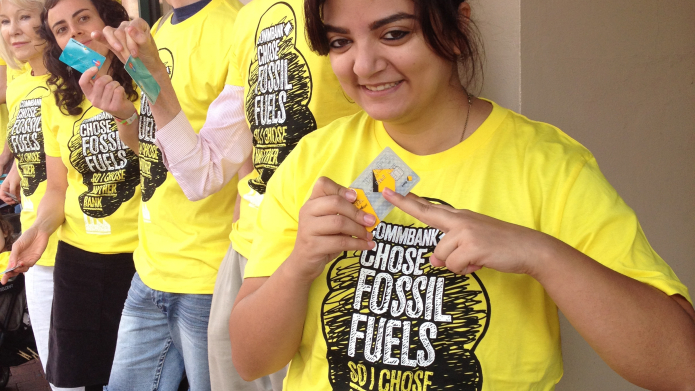 One hundred Commonwealth Bank customers turned out at branches across Australia on the 1st and 2nd of November to close their accounts in protest at the bank's investments in the fossil fuel industry. Divestment actions at Brisbane, Byron Bay, Sydney, Canberra, Melbourne and Perth saw customers turn out and collectively close their accounts, sending a message that if Commonwealth Bank chooses fossil fuels, its customers are going to choose another bank.

It's the second time in as many weeks that customers of the big banks have collectively divested. On the 26th of October, ANZ customers in Melbourne closed their accounts, taking $2 million in savings with them and making a priceless statement to the bank. This weekend was another step forward in the fossil fuel divestment campaign in Australia, which has so far seen customers accounting for over $50 million in savings warn their bank that unless loans to cal and gas stop, they take their money elsewhere.

"I was horrified to learn that Commonwealth Bank was so heavily invested in activities that are damaging the Great Barrier Reef and increasing greenhouse gas emissions. The sooner I could take my money out the better, and I can't think of a more effective way to tell the bank that they're not going to fund environmental destruction with my money."

The actions took place just days before the Commonwealth Bank AGM in Adelaide on the 8th of November. Market Forces and 350.org are planning to attend the AGM, showing shareholders of Commonwealth Bank how their investments in fossil fuels are risking the bank's reputation as well as its balance sheet.

Take action! Shareholders of Commonwealth Bank can join the call for management to disclose the bank's exposure to the coal and gas sector, and detail plans for how it will divest from the fossil fuel industry. Click here to send an email to management.

To see which coal and gas export projects Commonwealth and the other big banks have been lending to, visit the online interactive map.