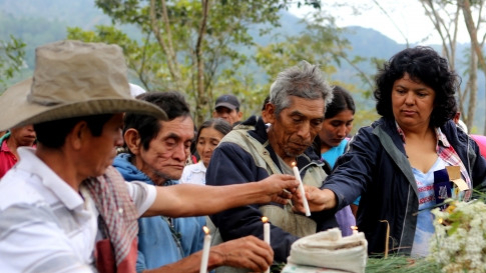 In an announcement on May 9, both financiers stated that they took the decision after a court in Honduras decided on May 8 to press charges against four individuals in connection with the murder of Berta Cáceres. One of the suspects is the acting manager for social and environmental matters of the Honduran company DESA, the developer of the Agua Zarca project. FMO and FinnFund further announced that they will organize an ‘independent experts' mission to Honduras, taking place as soon as possible, that will ‘analyse how an exit could take place responsibly'.

Berta was murdered on March 2, 2016, after for years leading the struggle of COPINH (Council of Popular and Indigenous Organizations of Honduras) against the Agua Zarca project, situated along the Gualcarque River. The conflict around the project has resulted in many human rights violations and a number of killings, including earlier the 2013 murder of Tomas Garcia.

Over the last few years COPINH has repeatedly contacted FMO, insisting that they should not fund the Agua Zarca project, as the project sponsor had not obtained the required free, prior, informed consent of the indigenous Lenca people, and because land titles had not been properly obtained.

On March 16, 2016, following the news that Nelson Garcia, another member of COPINH, had been assassinated (despite the international spotlight being on Honduras following Berta's murder), both FMO and Finnfund (and subsequently CABEI, the third financier) announced that they would temporarily suspend all disbursements towards the Agua Zarca project.

Our organisations call upon all three financiers to now take immediate measures to formally and fully divest from the project.

Our organisations also call upon the financiers to ensure proper reparations are provided to the people who have been adversely affected by the project to date.

FMO, FinnFund and CABEI should also undertake profound procedural and policy reforms to ensure that their future investments will not result in further human and environmental rights violations.

Our organisations further reiterate our demand that an independent investigation takes place into the circumstances of Bertas' death, conducted by the Inter American Commission on Human Rights (IAHCR)

"FMO has confirmed to COPINH that they decided to withdraw from the Agua Zarca Project. COPINH is relieved that at last FMO has made this decision and thinks it should be carried out immediately. The threats against the Lenca people who oppose the Agua Zarca Project continue today.  The lives lost can never be returned.  FMO and FinnFund bear responsibility for the violence and grave violations of the rights of the Lenca people as a result of the Agua Zarca project and in addition to withdrawing must take serious action to remedy the harm done. COPINH hopes that FMO's and Finnfunds mission to Honduras will focus on this latter aspect and will not cause any further delay in deciding to withdraw" states Jose Asunción Martinez of COPINH.

Gustavo Castro Soto, director of Friends of the Earth Mexico (Otros Mundos), who was injured during the attack in which Berta was murdered, said: "Finnfund and FMO are partly responsible for the violence and the murder of Berta Cáceres. Financing the project Agua Zarca helped prompt continued threats to and repression of COPINH. They provided funding without consulting the Lenca indigenous peoples, violating their human rights. They have to end their involvement in the project Agua Zarca, of course. But they also should ensure they do not make the same mistake again with other projects."