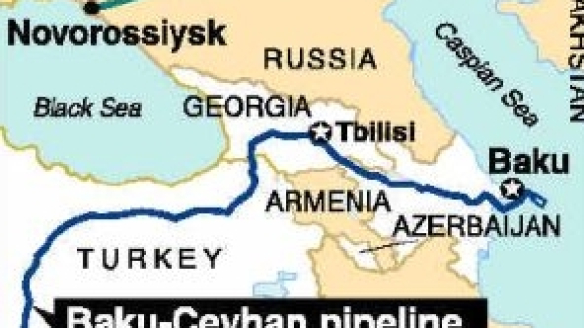 A BP-led consortium is breaking international rules governing the human rights responsibilities of multinational companies in its operations on the controversial Baku-Tbilisi-Ceyhan oil pipeline, the UK Government ruled today.

Environment and human rights groups, which had filed an official complaint against BP eight years ago, say the ruling puts the oil multinational in breach of its loan agreements -- including a multi-million pound loan backed by UK taxpayers.

Villagers living along BP's flagship oil pipeline have struggled to hold the companies accountable for alleged human rights abuses associated with its development. The pipeline brings up to one million barrels of oil a day from the Caspian Sea, across Azerbaijan and Georgia, to Turkey from where supertankers ship it to Europe.

The ruling follows the Complaint lodged under the OECD Guidelines for Multinational Enterprises by six groups in April 2003. The UK Government backed the pipeline in 2004 through its Export Credits Guarantee Department (ECGD).

The ruling states that BP failed to investigate and respond to complaints from local people of intimidation by state security forces in Turkey guarding the pipeline. Local human rights defender Ferhat Kaya, for instance, has reported that he was detained and tortured by the
paramilitary police for insisting on fair compensation. Villagers allege that they are routinely interrogated when they raise concerns over the pipeline.

The pipeline passes through an area of north-east Turkey with a substantial Kurdish minority who have been subject to state repression for decades. Since the pipeline's inception over a decade ago, human rights campaigners in Turkey and the UK have highlighted the risk of local people, particularly Kurdish minorities, being intimidated by state security forces. Today's ruling has found that, despite widespread awareness of this "heightened risk intimidation", BP failed adequately to respond to or investigate allegations of abuse that were brought to its attention.

The Complaint argued that such intimidation deterred local people from participating in BP's consultations about the pipeline's route and compensation negotiations for loss of land and livelihoods.

BP has consistently promoted the BTC pipeline as "world class" in its approach to human rights. According to its legally-binding commitment to comply with the Voluntary Principles on Security and Human Rights (an international code of conduct for multinationals operating in the energy sector), BP is obliged to "consult regularly" with local communities about the impacts of pipeline security arrangements and should record and report credible allegations of abuse by security forces to the authorities.

The UK Government has now found that BP breached its undertaking and failed to adhere to the Voluntary Principles in the north-east region of Turkey by not responding adequately to allegations of intimidation and not investigating them.

The ruling sets a major precedent. In future, to comply with these corporate social responsibility guidelines, multinationals will have to take into account the human rights  context in which they operate, including the risk of intimidation, when designing and implementing corporate grievance mechanisms. Such mechanisms need to be robust enough that people can report intimidation without fearing further reprisals.

Given BP's legally-binding commitment to ensure that the BTC project complies with the OECD Guidelines, today's ruling from the UK government potentially places the company in breach of its contracts with the major international financial institutions (IFIs) that backed the project with taxpayers' money in 2004. In addition to the UK's export credit agency, these include the International Finance Corporation of the World Bank, the European Bank for Reconstruction and Development (EBRD) and other European and US export credit agencies.

The failure of BP to adhere to the OECD Guidelines and the Voluntary Principles, as required under the BTC project agreements, also raises major concerns over the due diligence undertaken by the IFIs before supporting the pipeline.

"Public funders knew about the intimidation, but failed to check whether BP had adequate procedures in place to address and remedy it. They ploughed ahead with the project anyway for political reasons. Western governments appear to have been willing to sacrifice the human rights of those living along its route in order to grab the Caspian's oil for the
West."

"It has taken eight years for the claims of villagers facing repression in this isolated area of Turkey to be recognised.  We hope this ruling marks a turning point for the governments and companies involved so that villagers receive just compensation and human rights are not only respected but also promoted through investment in future."

"This ruling shows that BP's pipeline allowed and enabled repression of local communities. Yet EU governments and companies continue to push for new pipelines to suck oil and gas westwards from distant places of extraction. BTC stands as a warning that these planned 'energy corridors' risk becoming 'corridors of militarisation and human rights abuse'."

Craig Bennett of Friends of the Earth says:

"Using taxpayers' money to support this pipeline at the expense of people's human rights and the planet is a stain on the UK's reputation. The pipeline would not have been built without public funding. Government ministers must now come clean about what action they will take against BP for breaching its loan agreement. The only way to stop this cycle of
exploitation is to wean us all off our fossil fuel dependency by investing in the safe, clean and ethical technologies of the future."

"This long-awaited ruling underlines the need for urgent changes in the UK's export credits system. Empowering British companies to violate the national laws of other countries goes against the most basic form of social and environmental responsibility. Without effective safeguards, projects like BP's one are bound to happen again."

"The UK Government's condemnation of BP for breaching internationally recognised human rights standards on the BTC pipeline begs the question of why taxpayers' money, in the form of export credit guarantees, was used to fund such a project in the first place. If such support had been withheld until BP had addressed the human rights context of their pipeline project,
then these violations might never have occurred. It is time the UK's Export Credits Guarantee Department was reformed to prevent this from ever happening again."

The ruling gives BP three months to review and report on what it can do to strengthen its procedures to address these failings.


2. The 1,760 kilometre-long Baku-Tbilisi-Ceyhan (BTC) oil pipeline runs from the offshore oil fields near Baku in Azerbaijan through Georgia to the Turkish port of Ceyhan on the Mediterranean. A consortium of oil companies, led by British oil multinational BP, built the pipeline from May 2003 onwards, completing it in 2006, although negotiations and
preparations had started back in the late 1990s.

Its construction and financing provoked major concerns regarding its social, environmental, development and human rights impacts.

- Local people who protested were allegedly threatened by consortium and national government officials.
- Before and during construction, the pipeline violated more than 170 World Bank and European safeguards.
- Poverty alleviation benefits are questionable and the potential for exacerbating social divides high.
- The Host Government Agreements between the consortium and the countries supercede all national laws (except the national constitution) and effectively exempt the pipeline from any improvements in environmental and human rights legislation.

For other documents and a timeline of the 8-year process, see:
http://www.thecornerhouse.org.uk/resource/revised-final-statement-complaint-under-oecd-guidelines-multinational-enterprises


4. OECD Guidelines for Multinational Enterprises provide recommendations for "good corporate behaviour" in the areas of employment and industrial relations; environment; combating bribery; consumer interests; competition; and taxation. Multinational enterprises operating in or from Organisation for Economic Co-operation and Development member states are expected to adhere to them.

The OECD Guidelines were revised in 2000, giving NGOs the right to submit
complaints against OECD-based companies. Complaints are submitted to the
relevant country's National Contact Point (NCP) - a government office
established to promote adherence to the Guidelines.

>From 2007 onwards, the groups were represented by solicitors Leigh Day &
Co: http://www.leighday.co.uk/our-expertise/human-rights


6. The Export Credits Guarantee Department (ECGD) uses taxpayers money to
help UK exporters, primarily large corporations, involved in 'high risk'
projects or areas of the world by providing insurance, loans, guarantees
and credits. The majority of its support in recent years has gone to
companies working in the arms, aerospace and fossil fuel-related
industries.

In February 2004, ECGD issued £81,703,893 ($106 million) in guarantees to
the BTC project, the largest guarantee issued in the 2003-04 financial
year, even though public interest groups had provided the Department with
detailed evidence documenting the project's failure to date to comply with
the ECGD's stated policies on environment, development and human rights.

Ferhat Kaya has lodged a complaint at the European Court of Human Rights to hold Turkey to account for its treatment of him so as to prevent future abuses.

See also reports of the Fact-Finding Missions conducted by the groups annually from 2002-2005 to areas in Azerbaijan, Georgia and Turkey along the route of the BTC pipeline, particularly that to Turkey in 2005:

In response to this Complaint, in May 2003, the BTC Consortium and the governments of the three countries through whose territory the pipeline passes (Azerbaijan, Georgia and Turkey) issued a legally-binding undertaking to ensure that the project complied with the OECD Guidelines and the Voluntary Principles on Security and Human Rights.

See "Joint Statement on the Baku-Tbilisi-Ceyhan Pipeline Project", 16 May
2003, http://subsites.bp.com/caspian/Joint%20Statement.pdf


9. In a statement to the UK Parliament on 12 January 2005, Lord Sainsbury, then Under Secretary for Trade and industry, stated: "BTC Co is contractually committed to complying with the guidelines".


10. Some 70 per cent of the estimated US$4 billion costs of developing the BTC pipeline was financed and subsidised by public money or public institutions. The bulk of the public money was in the form of loans from the European Bank for Reconstruction and Development (EBRD) of $250 million and the World Bank's International Finance Corporation (IFC) of
$250 million.

The NCP's Revised Final Statement would appear to put the company in breach of its legally-binding undertakings to these funders.